As you know, and as the TV news in this movie will tell you, the Mayans predicted that the world would end on December 21st, 2012. So in this movie it does. Actually, that must be the fictionalized, eclipse-fearing Mayans of APOCALYPTO that predicted that, because the real Mayans didn’t. They just had a calendar which considered somewhere around that date to be the end of an era. They also predicted things that would happen after 2012, so obviously they didn’t expect the world to end. Let’s not hang all this doom and gloom on them. They invented chocolate. 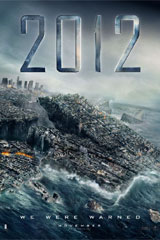 2012 is the story of a 7-year old girl who faces down the violent destruction of the entire world except for Africa, and learns to stop wetting her bed. Seriously, the last line of the movie is about her not having to wear pull-ups anymore. That’s what Roland Emmerich thought was important to end on.

This is a movie where millions, maybe billions of people die, but it’s rated PG-13 because nobody ever says “two buildings are collapsing and we have to drive between them in order to get to safety, oh fuck!” After the most enjoyable sequence of the movie, in which all of Los Angeles acts like a balsa wood model on top of a water bed with a fat guy jumping up and down on the matress, there’s a closeup of a guy’s arm with a little trickle of blood dripping down it. And I thought that’s weird, how is this the first wound we’ve seen? Everybody else just gets swallowed cleanly into the earth I guess.

The movie opens with my man Chiwetel Eijiofor travelling to India to talk to a guy in a mine deep in the earth. It’s kind of cool to imagine this is the opening of a bigger budget REDBELT 2 and he’s going to visit an old friend to find out something. Maybe the workers in the mines are being harassed by corrupt soldiers, and he has to teach them how to defend themselves, I don’t know. Unfortunately he turns out to be a geologist or a scientist of some kind, not a martial artist.

Danny Glover plays the president, and you can do the same with him. Obviously we want him to be the same character from PREDATOR 2, and his defeat of (and later endorsement by) the Predator must’ve been what made him so popular. Otherwise how would he have unseated Obama? But then I realized wait a minute, he’s already the president before Obama’s term would end, so this is an alternate timeline. At the same time a Schwarzenegger imitator plays the governor of California, so it’s not 100% separate from our world. I bet those Star Trek fuckers screwed something up when they went through that black hole or whatever.

By the way, isn’t it kind of funny that when they had a black president in DEEP IMPACT it was a cool novelty, but in this movie Emmerich had to have a black president or he’d look like an asshole? Our progress as a nation can be measured through our crappy disaster movies.

Most of the movie centers around John Cusack as an obscure writer of self-published Atlantis-related novels with a part time job as a limo driver. He finds out about certain doom from a crazy (but correct) talk radio host (Woody Harrelson) and tries to save his kids, ex-wife and her new boyfriend (the director of THE STATION AGENT) through his connections to a rich boxing family. Goverment officials and the super rich are boarding giant boats ($1 billion per ticket) which will protect them when the entire world floods. There’s alot of debate about letting people die when there’s extra room on the ship, and I guess since Cusack is a limo driver he represents the hired help trying to get a piece in a world controlled by the Man. Chewitel gets on the boat because he works for the White House, but his dad goes out playing jazz for tourists on a cruise ship. That’s how it works.

But everybody who gets to China ends up let onto the boat. It’s only the people with no faith in the system, who try to sneak onto the boat – Cusack and his family, the Russian family – who almost get crushed to death when the gates open. They should’ve had faith that Chewitel would talk some humanity into the world leaders. He’s Redbelt, man! He knows the escape!

And I guess there are some survivors, so it does follow the Mayan calendar after all. Just the end of the era of having multiple continents, not the end of the world. Let’s not blow things out of proportion.

I guess it’s time to stop being surprised that they line up so many good actors for a movie like this. I just hope Ejiofor uses it to fund himself while he does smaller movies, and doesn’t just become a guy wasting his talents playing generic supporting roles in bad studio movies. There’s not much room to do much in any of these roles, except maybe Harrelson’s, but I didn’t think he was very funny, unfortunately. I guess the nicest thing I can say is that Thandie Newton plays the first daughter and this is her first role in years where I didn’t hate her.

I apologize for going to see this. I knew it wouldn’t be good. The only Emmerich movie I ever liked was UNIVERSAL SOLDIER. 10,000 BC was kind of funny, but not that much. This one seemed to take the stupid disaster formula to the limit by not just destroying select landmarks, but pretty much wiping out the entire surface of the earth. Its hero seems to be by far the greatest driver in the history of automobiles considering how he dodged every solid object in the city of Los Angeles, and his ex-wife is also dating the all time best amateur pilot. Those make for two hilarious and cool disaster sequences, and there are other funny parts, like the scene where a plane dumps expensive sports cars all over the Himalayas. And if we’re gonna give Emmerich credit for doing what you’re supposed to do then give him credit for making action scenes where you can tell where the good guys are, which direction they’re moving in and what is happening to them. That’s getting to be a rare skill.

So I think I see what some people enjoyed in this, but I thought it was kind of boring. Most of the movie is pretty weighed down by all the dull drama between characters you couldn’t possibly care about. Then again, I’m not sure I’d want to see the good version of this movie. If the characters seemed real it would just be horrifying and upsetting.

Chiwetel Ejiofor Danny Glover disaster movies John Cusack Roland Emmerich Woody Harrelson
This entry was posted on Saturday, November 28th, 2009 at 4:10 pm and is filed under Reviews, Science Fiction and Space Shit. You can follow any responses to this entry through the RSS 2.0 feed. You can leave a response, or trackback from your own site.