PORKY’S II: THE NEXT DAY is a weird one – a foolish but also pretty enjoyable shot at catching lightning in a bottle. On one hand the gang from part 1 kind of seem like they’re your buddies, so it feels natural to go back to school with them. On the other hand the fresh feel of the first one came from trying to make a different kind of movie, and from basing it on stories from Bob Clark’s youth. For this one, to a certain extent, he’s trying to make the same kind of movie, and making up new stories that might remind you of the real ones. So it’s kind of forced. 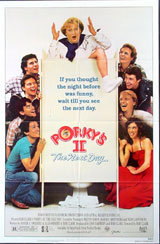 It’s the sequel curse, really. People will be mad if you don’t reference stuff from the first one, but if you do they’ve already seen it so it’s not gonna be as great as they thought it would be. It’s like Pop Tarts – they’re fine and everything but every time I eat one I think “that’s right, I forgot, they’re kind of dry and flavorless.” That’s how it is in this sometimes. When it opens with Pee Wee waking up with a boner that’s a cute “we have to do this again” moment instead of an outrageous way to start out a movie. The sequel is Pop Tarts, the original is Toaster Strudel.

The plot of this time is a little more far-fetched, and that leads to both the movie’s strengths and it’s weaknesses. It’s not as real as part 1 because it’s more of a movie conflict: they end up taking on the school board, the religious right and even the Ku Klux Klan. But those storylines also make it kind of interesting because instead of just more horniness and giggling it deals with self righteous censors, corrupt politicians and prejudice against Seminoles. Plus horniness and giggling.

I think it also makes a point of making Wendy a much stronger character with pranking powers equal to a boy’s. She plans and executes the dismantling of a political career through the medium of classy-French-restaurant-slapstick (fake puke, garcons falling in fountains, etc.). That part’s too broad for me, with some laughs here and there. But I like the part where she reveals to Pee Wee, in a genuinely kind of sweet scene, that she’s not really the ho people say she is and that she had sex with him in the bus at the end of part 1 because she actually liked him.

The title implies a HALLOWEEN II (original version) approach, but after initially dealing with Pee Wee’s feelings it doesn’t really matter that it’s the next day, and continues into other days. Also, the establishment known as Porky’s is still demolished, and Porky himself is never seen. From what I’ve read it sounds like they wanted him to be one of the Klansmen, but he wouldn’t do nudity. Porky has standards.

Even after losing his virginity Pee Wee is still insecure, and keeps pretending he has a stable of women to hook the other guys up with. They know he’s full of shit but play along to embarrass him, then he tries to prank them and they try to prank him back. I like how in the scenes where they’re fucking with him they don’t pull it off perfectly. They keep almost cracking up, or you can see their faces smiling but turning away so he doesn’t see them. Still, they’re starting to be like the Impossible Mission Force of pranking, they get pretty elaborate. Alot of cloak and dagger shit goin on here.

My favorite part of the movie is the reaction the cops have to the guy in the excellent zombie makeup who’s supposed to scare people in the cemetery. Usually in a broad comedy like this everybody would be superstitious and think it was a real zombie, or they’d see the zombie and decide to stop drinking. In this one nobody who sees the zombie really reacts much, they just kind of stare at him wondering what his deal is.

Our pal Alan Ormsby (DERANGED, DEATHDREAM, THE SUBSTITUTE) is credited as co-writer along with Roger Swaybill and Bob Clark.

Alan Ormsby back to school Bob Clark
This entry was posted on Monday, September 28th, 2009 at 10:27 pm and is filed under Comedy/Laffs, Reviews. You can follow any responses to this entry through the RSS 2.0 feed. You can skip to the end and leave a response. Pinging is currently not allowed.