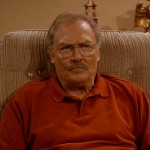 But now I’m making it sound stranger than it actually is. All I can figure to describe it is “ONE FLEW OVER THE CUCKOO’S NEST meets ROLLING THUNDER.”

The story takes place in an old castle “in the Pacific Northwest of the United States.” Which is funny because I’m pretty sure the Native Americans who lived here first didn’t build castles. And we don’t have Mideival Times restaraunt here so it can’t be that either. Anyway this castle is being used by the military as an experimental mental facility for mentally ill (or possibly faking) Vietnam vets. Neville Brand is an angry drill sergeant type but he pretty much just lets them have the run of the place, going around dressed as pirates and Superman and crap. One guy is busy casting a dog version of Hamlet (which perhaps could be an influence on Ang Lee’s racoon version). Robert Loggia does a blackface routine. One guy has a funny hat. etc.

There’s some funny lines in her but I have to admit I’m not entirely on the movie’s wavelength. This is in the SHOCK CORRIDOR kind of vein where each insane person has some gimmick or is wacky and cute. There’s all kinds of random dialogue like “the man on the moon fucked my sister!” and people do wacky things like read the miranda rights to a boar’s head on the wall or show up at 3 in the morning dressed in beach gear and dump a bucket of wet sand on the colonel’s desk. Sometimes it’s funny but I feel like it’s kind of forced and because so much of the dialogue has no meaning I found myself starting to tune out what people were saying.

But what makes the movie work is Stacy Keach as the main character, Colonel Kane. He’s the psychiatrist who’s just arrived at the castle determined to figure out how to help these people. He demands that the inmates be allowed to come into his office whenever they want, and he indulges anything they want to talk about, never dismissing their nonsense as nonsense. And he talks in an eerily calm voice like HAL in 2001. You start to realize that maybe he’s crazy too.

He’s especially fixated on helping one particular inmate, an astronaut who freaked out right before take off and was too scared to go to the moon. According to IMDB this is supposed to be the same astronaut character who (not that I remember this) is told by Regan in THE EXORCIST that he’s going to die in space.

And then a little more than halfway through there’s a big twist that you maybe saw coming and that’s when the movie gets much more interesting. There’s more going on here than you were told at first, and Kane and some of the others become much more interesting and tragic characters than they seemed at first.

The reason I finally got around to seeing this is a reader named Sean recommended it to me and he mentioned that there’s a fight scene in a bar. This was a real good scene, kind of like a more drawn out version of something that might happen in a Seagal picture. Unfortunately this was made in 1980 so you’ve got a certain cheeseball feel to it. The opponents are some kind of bisexual biker gang with a leader who looks like Gary Glitter. And they’re those kind of Troma style villains who just bully somebody for no reason at all. It might be better if they had even the slightest reason to be mad at these guys before they start picking on them. There’s a nice touch though, I didn’t make the connection until watching the movie again with the director’s commentary, but you see the biker gang driver by in the very beginning of the movie, and then forget about them.

Anyway, maybe the most significant thing about this movie that makes it different from others is that Blatty, who apparently is a Jesuit, is trying to have a religious discussion with this movie. THE EXORCIST showed that he believed in evil monsters but now he’s trying to show his feelings about God. The movie brings up this idea that if people are just molecules or animals, why do they sometimes do nice things for each other instead of only focusing on survival. It’s an interesting philosophical question but I don’t buy Blatty’s idea that it PROVES there’s a God. I figure most atheists don’t know why men have nipples or why people do nice things or even why the sky is blue, even though there is an official scientific explanation for that one. All they have to figure is that things are complicated and people don’t necessarily understand how they work. That doesn’t mean there is a God or there isn’t one, it just means that humans don’t know everything there is to know.

Still it’s a nice notion and I like that he is using movies to make statements that are that personal and profound to him. And especially weird ass movies like this. Put this in the not great but very original category.

Joe Spinell Moses Gunn Neville Brand Robert Loggia Stacy Keach Tom Atkins William Peter Blatty
This entry was posted on Wednesday, March 15th, 2006 at 2:12 am and is filed under Comedy/Laffs, Drama, Reviews, Thriller. You can follow any responses to this entry through the RSS 2.0 feed. You can skip to the end and leave a response. Pinging is currently not allowed.

One Response to “The Ninth Configuration”