This is the perfect exaggerated painting of the 1980s and the cocaine wars. The good old days. And it even makes you root for this psychotic egomaniac shithead, Tony Montana (Al Pacino [Scarface]). ‘Cause first you see him as an immigrant getting hassled by the man, working as a dishwasher and tough talking his way into bigger work, dropping off some money for some cocaine. His higher ups (small time hoods themselves) don’t believe in him. But when the dealers pull a cross on Tony and his friends and it turns into an insane bloodbath (literally, come to think of it, because alot of the mayhem takes place in the shower), all involved must admit that he handles it with, uh, flair. He leaves with the money and the yayo (a term now popular because of the movie), tells the middlemen to fuck off and brings it all straight to the area boss, who is very impressed. This is typical of his quick rise up the totem pole. Initiative, elbow grease, bootstraps, etc. 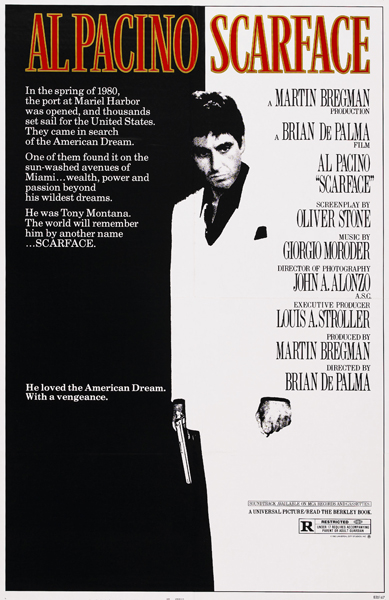 Then of course you got the usual gangster/mogul/rock star story arc – good times, lady trouble, betrayal, paranoia, addiction, the straw that breaks the camel’s back, big awesome shootout. (that last part was the main thing missing in THE DOORS in my opinion.)

Al Pacino of course is legendary for playing this character. His accent is way the fuck over-the-top but it works. He exudes such a ridiculous confidence that you have no trouble believing this little dude can take on all comers. He says he purposely made the character 2-D and not 3-D, but that’s okay. He’s perfect. As cartoonish as he is you definitely believe he’s a real guy.

You also gotta like Steven Bauer (a bonafide Cuban American actor) as Manolo, best friend and right hand man. He’s so loyal and supportive you feel like he’s your best friend too. Not that Tony Montana appreciates it.

This is obvious but I think part of what makes the movie so vivid and tense is the occasional bursts of outrageous violence. It’s not always just the guns you usually see in crime movies – they tried to mimic the type of maniacal shit that was going on in drug cartels and they got a couple genuinely shocking scenes. My favorite part is when Tony and his asshole colleague Omar are visiting their hot shit supplier in Bolivia. There’s tension between Tony and Omar and then you know something’s going on when the big man leaves to take a phone call, and you see him and one of his thugs talking and watching our guys coldly through the window. They politely arrange for Omar to take a flight back to talk to his boss and come back the next day, leaving Tony behind. You know something’s fishy but you don’t know if this is bad news for Tony or for Omar.

The big man tells Tony how much he likes him but that he doesn’t like Omar, as he casually looks through binoculars at the helicopter… where they are cutting up Omar. Then they tie a noose around his neck and toss him out the fuckin helicopter! You see the body fall and jerk and then flail around. I couldn’t believe I was seeing that shit, and it looks so real. (Turns out they used a real stuntman – don’t ask me how. I don’t know.)

Of course the director is my man DePalma, but other than being well crafted and uncompromising, this doesn’t feel all that much like your typical DePalma picture. The one scene that’s vintage DePalminator is the infamous chain saw scene. Tony’s first big coke buy goes sour and him and his guy end up cornered in the bathroom, his friend shackled to the shower rod about to get brutally power tooled to death. So right as the massacre starts, the camera lazily floats out the window and down to the street where we see that the two back up guys waiting in the car outside are busy flirting with some blonde chick in a bikini. Then the camera floats back up to the apartment bathroom of horrors, which is now noticeably more red and wet than a minute ago.

And during this ingenius camera maneuver I’m pretty sure you can just make out, real quiet, some screaming and sawing sounds from inside. Mixed in with the dialogue and sound effects from some movie showing on the TV set.

DePalma handles the material just about perfect, but alot of the credit I think should go to Oliver Stone for his script. Remember back then he was in an insane coke haze that caused him to accidentally type out a couple great genre scripts including this one and CONAN THE BARBARIAN. I guess this was written for Sydney Lumet, who wasn’t so interested when he read how it turned out. I think that makes it all the more admirable that Stone came up with this fucked up nightmare instead of making the more socially acceptable version Lumet was interested in. The world is yours.

For the most part I wouldn’t say this movie was dated. Like I’ve said before, I consider the 1980s to be a dark and evil time for art, culture, humanity, etc. But this movie seems more like a period piece, a document of a time and place, than some cheesy movie from the ’80s. The one exception is some of the music. The mostly keyboard score is made by some guy Giorgio Moroder, who I thought I recognized as a respectable name but it turns out he’s some guy who wrote songs on TOP GUN and crap like that. Anyway I think most of his score fits for these asshole cokeheads. Occasionally the fake drums and shit get on your nerves but not too bad. The one major failure on the musical front is the montage near the end set to some god awful pop song, or top 40 as it was called in those days. I could do without that horseshit.

The twentieth anniversary edition of the DVD has a couple notable extras on it. First you got this documentary where a bunch of famous and not so famous rappers talk about how much they love SCARFACE. For some reason, all rappers want to be Scarface when they grow up. This featurette is actually pretty disturbing because alot of them either really believe, or pretend to believe when the cameras are around, that Tony Montana is a good role model because he came from nothing and made lots of money. This materialistic attitude is a sad trend in modern music and if you ask me it is pretty much a 180 degree misreading of what the movie is about. I mean seriously, who is the better person in this movie: Tony, because he makes millions of dollars, kills alot of people including close friends, gets addicted to coke and gets murdered, or his mama, who won’t let him in her house because he’s a bad influence on his sister? I know it’s not a preachy movie and that’s good, but at the very least it’s a tragedy. Did they think he looked happy with all that money and the pile of cocaine on the table? Maybe they never got all the way to the end.

Discussing the scene where Tony murders his best friend for a dumb reason, Eve says, “Honestly, I think he overreacted.” Most of the interviewees agree, but one of them actually argues that Tony was justified!

Anyway, a better special feature is something I’ve been wishing for on alot of other DVDs: clips from the ridiculous TV version of the movie. They compare scenes from the actual version to the bastardized cut, which includes such great redubbed lines as “How’d you get that scar, eating a pineapple?” and “This city is like a big chicken, waiting to get plucked.”

Anyway, if you haven’t seen SCARFACE, get to it. If you know Method Man or somebody they would probaly loan it to you.

Al Pacino Brian De Palma F. Murray Abraham Giorgio Moroder Harris Yulin Mary Elizabeth Mastrantonio Michelle Pfeiffer Oliver Stone Robert Loggia Steven Bauer
This entry was posted on Friday, April 22nd, 2005 at 3:23 pm and is filed under Crime, Drama, Reviews. You can follow any responses to this entry through the RSS 2.0 feed. You can skip to the end and leave a response. Pinging is currently not allowed.