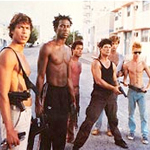 I think this is Michael Mann’s version of a RED DAWN type teen action movie. It’s hoods vs. kingpins in Miami, great cast, show-offy camera moves and editing, moody atmosphere, restrained dialogue. And as the cover brags, it has a high grade ’80s pop soundtrack – “Broken Wings” by Mr. Mister, “Let’s Go Crazy” by Prince, a bunch of songs by some band called The Reds that also played on MANHUNTER – even a title song by Bob Dylan, somehow.

I’d had this recommended to me by many people over the years, and it’s always a good sign when RZA references a movie in his lyrics. I knew what it was, and that I should see it, but clearly I didn’t understand just how great it was gonna be, or I would’ve gotten started earlier. Now I can only speculate what those extra years with BAND OF THE HAND in my life would’ve been like.

It opens in mayhem: an energetically cut series of elaborate tracking shots introducing our hoods: two guys fighting in the middle of a big rumble, a guy in a shiny Paisley jacket selling a briefcase full of coke, a punk kid with a Walkman coming home to the trailer park and shooting his abusive dad. They get busted, cut to mug shots. It’s what was called “MTV style” back then, before that was a bad thing, and it’s a style that holds up, it still gets my blood pumping. 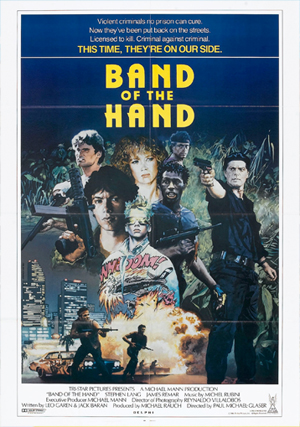 They’re all minors charged as adults, and suddenly they get yanked out of juvi with no explanation, get handcuffed in the back of a truck, taken out on a swamp boat and dumped off in the water near a small island. They wander to land and find Joe (Stephen Lang, Colonel Quaritch from AVATAR), a quiet, head-banded dude (read: Native American) who gives them minimal camping supplies and less explanation. He burns their files, giving them a new start, and tells them “Learn to live… or die. That straight enough for you?”

They complain and they fight each other but this happens less and less as they survive a storm, hunt a wild boar, get growled at by a bear and a panther. Some of them hate each other and get in scuffles, they argue with Joe and are very stubborn, and then all the sudden they start respecting each other and become brothers. I’m such a sucker for this kind of thing. When two guys are fighting over a compass, “Crazy,” who has not spoken a word for the entire movie, starts yelling at them. Soon they’re helping each other out.

“Crazy” is their nickname for J.L., I guess he would be the Mad Murdoch of the crew. He’s a small guy who’s completely confident in his spikey punk haircuts and sunglasses, he doesn’t give a shit that he doesn’t fit in. Also because he’s a little psycho he has spent time learning how to build explosives. I know that’s a little more uncomfortable to think about right now but even in the movie it was to show that he was a maniac. His experience with Joe on the island just helps him channel that crazy so that he’ll use it against somebody more harmful to society than his school building.

The actor is named John Cameron Mitchell, I bet he went on to do some real badass shit, probly lifted some weights and did some AMERICAN NINJA movies or something, let me look him up here… oh, actually he starred in and directed HEDWIG AND THE ANGRY INCH, and then directed SHORTBUS and RABBIT HOLE. So he went a different route. But hopefully if he ever gets shit from any homophobes he stares them down and they remember he was in BAND OF THE HAND and then they start crying and run away.

It’s great, largely non-verbal storytelling and real good acting by these guys. I especially like the expressions on Carlos (Daniele Quinn), who looks like a young James Coburn with a little Adam Yauch mixed in. One day Joe sends the band on a tracking mission, and after days of hiking and going in circles they hear music and come to a big party with a band playing. You just watch their faces as they play it cool. They’ve been isolated in the wilderness for who knows how long, they’re dressed in rags, like savages, holding spears, and all the sudden they walk into a crowd of people having fun. They just casually take some fried chicken off the table, go over and watch the band, nod their heads, don’t even say anything. I’m not sure if they realize at first that this is their graduation. At least from the island. They’re not out of the program yet.

I knew from what I’d heard about the movie that they’d end up fighting drug dealers, so I actually thought Joe was training them as some kind of off-the-books Dirty Dozen black ops vigilante crew. In fact he’s just trying to help them. Removing them from their situations (and society), teaching them to work together to survive, to rely on their skills, to have self worth. I wonder if people who send their kids to those boot camps think it’s gonna be like this?

The program moves to an abandoned house in Miami, which they fix up and paint neon graffiti colors. (This being 1986 it made me wonder if all the gaudy colors of early ’90s pop culture came out of Miami.) But chasing the crackheads out causes a conflict with local drug dealer Larry Fishburne, who works for kingpin James Remar, who Carlos got busted working for, and who currently has his girl Lauren Holly as sort of a kept woman. I like seeing young, brash Fishburne, pre-BOYZ N THE HOOD and still willing to rock a fancy haircut with stripes. And Remar being the top villain is great since he was, of course, a Warrior, and the Band of the Hand are kind of like the more positive Warriors. He’s a real slimy motherfucker, best demonstrated by the scene where he asks Holly how old she is, she says 16 and he says “Good” and to go upstairs and take her clothes off. (Plus he has some kind of voodoo shrine up there or something?)

This will eventually lead to a violent confrontation, in my opinion. While the Wolverines of RED DAWN took up guerilla warfare against the invading Russian army, these guys are only taking on a Miami coke empire. So it’s down to earth and believable? No, by any non-RED DAWN standard they’re up against impossible odds, so it’s tense. The best thing about Remar’s compound is the huge turret gun. Paul Calderon (PISTOL WHIPPED) gets inside and you just see him through the crack from outside. He gets sniped and suddenly somebody else takes his place. This thing is powerful and they’re willing to shoot their own fancy cars to bits trying to get the Band. John Cameron Mitchell gets the most badass maneuver in the whole movie when he runs across the roof and tosses one of his bombs inside the turret.

This is a classic, and finally available on DVD as of last year. Don’t make the same mistake I did and fuck around not seeing it. You won’t regret not regretting it.

Danny Quinn James Remar John Cameron Mitchell Lauren Holly Laurence Fishburne Leon Miami Michael Carmine Michael Mann Paul Calderon Paul Michael Glaser Stephen Lang
This entry was posted on Wednesday, May 8th, 2013 at 12:00 am and is filed under Action, Reviews. You can follow any responses to this entry through the RSS 2.0 feed. You can skip to the end and leave a response. Pinging is currently not allowed.

30 Responses to “Band of the Hand”