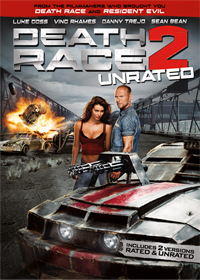 DEATH RACE 2 is what I consider a prestige DTV release – the kind that was not only put out by a major studio but where they put a little bit of money in it and tried to hire good people instead of just dump it out and hope the title attracts suckers. Honestly the production value seems about on par with the DEATH RACE part 1 from 2008, and although it doesn’t do anything drastically different from the first one it’s surprisingly decent and enjoyable. To me anyway, but remember what I said about the first one.

Let’s get the problem out of the way upfront: this is a prequel. Maybe they’re leaving it open in case they want to do a theatrical sequel, so they could continue the adventures of Jason Statham’s Frankenstein and Tyreses’s Machine Gun Joe, and they could expand the sport from the enclosed circuit they used in that one to something more like the cross country, gimmicky-car pedestrian runoverathon from the original. I mean the Paul Bartel directed original DEATH RACE 2000. Man, they make it hard these days – I never know how to refer to the remake that’s being prequelized. I can’t really call it “the original” or “the first one.” I guess maybe “part 1” works.

Anyway that’s obviously the direction it should go. But to do it at DTV prices they had to put it in ‘reverse’ instead of ‘drive’ and do the origin of the Death Race sport and the Frankenstein persona. The new star, Luke Goss, is somewhat Statham-esque. Throw a track suit on him and chase him around town with twelve cameraphones, have some kids cut it together in iMovie and you got a DTV Crank 3. But here he’s not playing the character Statham originated, he’s supposed to be the original Frankenstein originally voiced by David Carradine. I mean, the part 1 original Frankenstein that was a reference to the original DEATH RACE 2000 Frankenstein also played by David Carradine.

I like Goss. He’s a specialist in part 2s, having played Nomak in BLADE 2 and the elf prince sword guy in HELLBOY 2. Here he plays Carl Lucas, a getaway driver in the nearer-than-in-part-1 future. Trusted with the secrets of Sean Bean’s criminal empire, he also has to work with Bean’s dumbass nephews in a bank robbery that does not go well. Not only do they break his 20 year streak of not hurting anybody during robberies, they really break it by dumping a bunch of grenades out the back of his car and blowing up a whole bunch of cops. Then he gets busted and sent to Terminal Island.

I’m sure Joan Allen begged to come back as the warden Hennessy, but unfortunately for the three-time Oscar nominee this takes place before that character’s reign. Sorry, Toots. The prison is already privately run for profit and a sleazy ex-Miss Universe named September Jones (Lauren Cohan) covers their riots live on TV, but they got an old school warden who’s not happy about it. (Later we see Allen’s photo attached to a resume and hear that she “comes highly recommended by Halliburton”.)

There’s a pretty good cast of characters here. Ving Rhames and Danny Trejo play actual roles, not DTV cameos like DAY OF THE DEAD UNSPEAKABLY HORRIBLE REMAKE or URBAN JUSTICE. If you’re wondering which versions of our boys show up it’s actually probly the reverse of what you’d guess: it’s mean Ving, friendly Trejo. Ving is the cold-blooded head of Weyland International (I know, corny ALIENS reference), Trejo is the helpful new buddy in prison who also is the head of his pit crew when the Death Racing starts. And there are two returning (preturning?) cons, Robin MORTAL KOMAT Shou as the Triad 14K and Frederick KATE AND ALLY Koehler as the mildly autistic fact-spewer called Lists. (This is another problem with prequels: there’s not as much tension when we know most of the main characters have to be alive and imprisoned at the end.)

There are lots of villains in this movie and most of them have at least one funny bit of ludicrousness. For Sean Bean it’s his overly convoluted attempts at snappy dialogue. Before killing a guy he says, “The box, with its implications of rigidity and squareness, symbolizes unimaginative thinking and painful frustration.” (Bang!) “Sometimes we just need to step back and see if the solution to our problem is outside the box.”

(In other words, “Let off some steam, Bennett!”)

He also has a part where he throws a fit and smashes a flat screen TV. Funny, because those things have been around for a long time, and there’s a grand tradition of dramatic TV smashing in movies, but I don’t think I’ve ever seen it done with a flat screen until now. History is made.

For September Jones I gotta say the greatest moment is when she makes a proposal to Lucas while he’s naked in the prison shower. Not only does she comment on his junk but there’s a long shot of her eyes looking conspicuously downward. Funny stuff.

Rhames isn’t phoning it in the way he sometimes does. He deserves credit for adding a few weird moments. It’s not a mega-performance in my opinion, but he makes some funny decisions and does some good reactions. His best scene is when he comes up with the prize and the name for Death Race, which plays out kind of the way it would if Death Race was a real sport and a TV biopic was made about its creator. When he’s explaining that life and freedom are a prize more valuable than money he takes a long breath through his nose like he’s smelling life and freedom. I bet that wasn’t in the script.

(By the way, attentive Death Racists will note that in part 1 they said Hennessy invented the Death Race, now they’re saying somebody else. Don’t worry, there’s a goofy line that explains the discrepancy. Like I said, they make an actual effort on this one.}

I also love the scene where Rhames turns his back on September Jones and gets on an escalator, and she makes him finish the conversation by hitting the emergency stop button. He just stands there on the step, even though I’m pretty sure he would be capable of, you know, walking down. He takes a look, considers his options, and decides to stay and listen. I think maybe he just figures she’s earned the chance to talk to him by having the balls to do that to him. If that’s not it then the guy must be really, really lazy.

The director is Roel Reine, who also found lots of odd little character moments like that in PISTOL WHIPPED, the last Seagal picture that I thoroughly enjoyed. He did a pretty good job on the car races, which like part 1 are pretty much all real car stunts. I noticed a couple green screens, that’s it. Not a bunch of digital shit.

There’s all kinds of mayhem, and a good car chase before he even goes to prison. And his car is yellow in that one, not grey like all the prison cars. Livens things up. There are lots of explosions, a random flip, some gruesome car deaths (both satisfying and upsetting). My favorite action moment is when a driver climbs out of his car onto another one to shank the other driver. Hey, it’s a prison movie, you gotta have one of those.

The big missed opportunity is the Death Matches before the invention of Death Race. We learn that the video game type format where the cars can be armed if they drive over a certain spot when it’s lit up comes from an earlier carless form of televised combat. We get to see some of this and there are plenty of cool things that happen (including a blowtorch duel), but the shots don’t really flow together and the editing is way too choppy, it’s hard to get very excited about what’s going on. This would’ve been a way to distinguish it from part 1 if there had been some really topnotch fight choreography right here.

By the end of the movie we’ve seen Lucas get burned up and put on his Frankenstein costume and I started thinking about the DARKMAN sequels. I gotta admit, I’m ready for a part 3. I don’t know where there is to go in the world of pre-Jason-Statham’s-character death racing, but hopefully they’ll figure out something good. Maybe a secret international Death Race tournament that nobody is allowed to ever speak of, even in part 1.

Danny Trejo DTV DTV prequels DTV prequels to remakes Luke Goss Paul W.S. Anderson prison Robin Shou Roel Reine Sean Bean Ving Rhames
This entry was posted on Tuesday, January 18th, 2011 at 10:17 am and is filed under Action, Reviews. You can follow any responses to this entry through the RSS 2.0 feed. You can skip to the end and leave a response. Pinging is currently not allowed.