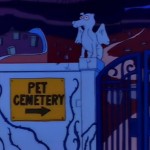 It’s a relief to see a Stephen King story where the main guy is not a writer and his marriage is not in trouble. This is the story of happily married doctor Louis Creed and his family of 2 kids and a cat moving to a new town in a house right along a popular trucking route. The road is so dangerous there’s a large pet sematary (sic) nearby, so they start worrying about their cat Winston Churchill. Their worries are not unfounded. But also they should keep an eye on their youngest kid in my opinion. (implied spoiler)

So you got pets and children getting run over, a real fun time at the movies, right? But wait, there’s more. The ghost of a guy the doctor tried to help has been warning him in his nightmares about how he should not do this one thing which, coincidentally his across-the-street neighbor (Herman Munster) shows him how to do: he buries his cat in a Native American burial ground so it will later come back to life.

The cat does come back (the very next day, they thought it was a goner, etc.), but now it’s mean and its eyes glow and it smells like shit. Not sure if it’s cat shit or regular shit but the point is Church smells terrible. Not a fitting tribute to the noted statesman and orator. This zombie cat situation is no good, but at least Dr. Louis didn’t have to admit to his daughter that her cat was dead. So it’s a mixed bag.

The real trouble comes when the kid dies, because obviously you know the mistake he’s gonna make. It’s a good concept because if this magic really existed of course you would have to try it. You know it’s gonna be a disaster to bring your kid back from the dead, but how can you not test it out? In fact, there’s a whole long sequence where Mr. Munster is leading Dr. Louis on a difficult hike to bury the cat, and he hasn’t explained why they’re leaving the pet sematary (sp). And it seems weird that the doctor wouldn’t question what’s going on. Especially considering that he has already had a dream where the ghost warned him about not doing this. So the conclusion I come to is that he understands what’s going on, and knows he shouldn’t do it, but the temptation is too strong, so he plays along. And I buy it.

I’m not sure the ghostly premonitions are necessary to the story, but the makeup on that guy is sure disturbing (his skin is dead white and his fatal headwound is still visible). But the creepiest part is the little kid, Gage. He comes back and mutilates poor Mr. Munster with a scalpel, but he’s still a baby. I know it’s not real, they use a dummy in some shots, but there are enough real shots and recordings of his playful laugh to creep me the fuck out.

If you give it too much thought some of it is kind of silly. For example, the pet sematary is a really cool set design, all pieced together out of weathered scrap wood, with a walkthrough entrance and the graves set up in impressive circles. But all of the signs are done in little kid handwriting. This thing was built by kids? Not credible. Kids wish they could build shit. But they can’t. They’re kids. I don’t care what you’ve seen on TV. If they could build they would build a fort, but they can’t, so they build nothing, especially not a sematary or grayvyarrd.

And by the way, what’s with this guy being okay with burying his cat in a beautiful Native American burial ground? Forget magic and curses, what kind of an asshole thinks it’s okay to bust open a huge carefully designed memorial from another culture and stick his daughter’s runover cat in it? NOT very culturally sensitive, in my opinion. And by the way, also not cool in a white man’s graveyard.

But those are little things, no dealbreakers as far as I’m concerned. It’s a well-executed movie and as my closing argument I will mention what I think is the most memorably horrifying scene: the (first) death of Gage. I think everybody can relate to the fear of a kid getting hurt. I know this because I don’t have kids but I get nervous just seeing other people’s kids goofing around next to roads or ledges. I see some toddler making a run for the street and calculate if the parent is gonna get there or if I should run out there and play Superman. So watching this scene there is alot of tension in the air seeing this little kid over on the grass here, the road right over there, the kite string gets away and rolls toward the street just as the parents are looking at the other kid, the toddler follows the string… in fact this scene has a perfect example of the kind of geography so lacking in modern movies. There’s an overhead shot that could almost be a map, showing the road and the field, the truck coming down the road, the kid running toward the road… oh shit, what an effective scene. Not pleasant.

Also I disagree with some of the spelling in this movie. But I liked it.

Stephen King
This entry was posted on Friday, October 31st, 2008 at 7:41 pm and is filed under Horror, Reviews. You can follow any responses to this entry through the RSS 2.0 feed. You can skip to the end and leave a response. Pinging is currently not allowed.