In the mid ’90s, the ground was shifting under everyone’s feet. Hair metal bands felt displaced by Nirvana, MC Hammer decided he had to sign to Death Row Records, and the action heroes of the ‘80s were starting to see the writing on the wall. So by the end of the decade the once dominant Stallone was trying to find his place in a new world. JUDGE DREDD (1995) had been a notorious flop, and ASSASSINS (1995) and DAYLIGHT (1996) were poorly received. He couldn’t get Tarantino to cast him as Max Cherry in JACKIE BROWN. Though COP LAND (1997) had been one of Stallone’s best performances, it didn’t seem to bring him the critical credibility he was looking for, and his followup, the thriller D-TOX, was sitting on a shelf (it would be barely released in 2002 under the title EYE SEE YOU). Stallone been pigeonholed by his massive success as a larger than life action god, and many critics were more interested in rooting for his failure than seeing him evolve, or even return to his roots.

With that in mind I understand why it might’ve seemed like a good idea to do a new version of GET CARTER. Following the template of a movie that inspired the indies that had in some sense replaced him allowed him to work within the expected tough guy tropes (revenge, guns, punching) while slowing down a little, diving into a character, being a little more serious – a kind of in-between role to dip his toe into crime movie trends without straying too far from his wheelhouse. And at least he wasn’t trying to do his take on THE MATRIX.

He recruited director Stephen Kay, who had done THE LAST TIME I COMMITTED SUICIDE, the indie with Thomas Jane playing Neal Cassady, also known as the movie Keanu Reeves did instead of SPEED 2. The script is by Dave McKenna, who had done AMERICAN HISTORY X and BODY SHOTS. (Since then he’s done BLOW, BULLY, S.W.A.T., and the SCARFACE video game and created the TV show E-Ring.) And in a failed attempt to placate purists, they got Michael Caine himself (not long after winning a best supporting actor Oscar for CIDER HOUSE RULES) to play his late brother’s business partner.

This version of Jack Carter works as an enforcer in Vegas. The movie opens with him chasing Mark Boone Jr. down Fremont Street in Vegas (as seen in VEGAS VACATION).

Carter comes to Seattle for his brother’s funeral – as in all versions, he’s suspicious about the story of a drunk driving accident, and starts asking around. Even though it’s pouring rain half the time, he refuses to change out of his trademark sharkskin suits ($5,000 silk ones according to the director commentary). 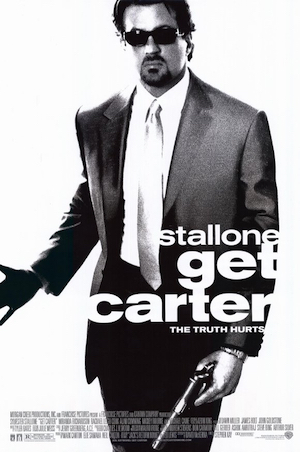 The Ian Hendry character Eric Paice is called Cyrus Paice, and is not a chauffeur but just an awesome party dude played by Mickey Rourke, always with women hanging off of him (including Rhona Mitra [BEOWULF] in the Dorothy White/Pam Grier role). He has pointy sideburns, wears fur coats and muscle shirts, confronts Carter in an alley, and has a bareknuckle fight with him at a mansion party. Rocky vs. Rourke.

Some of the stylistic devices have also aged goofily: white flashes, speed-ramping, Avid farts, dance music by Moby, Paul Oakenfold, Mint Royale and Groove Armada that I can’t really picture any character ever played by Stallone or Rourke wanting to listen to. These things meant to make the movie current for the turn of the millennium all seem obviously out of place – it was Stallone’s old school qualities that made him a fit for the story in the first place. But Kay has enough affection for the original to have Carter come to Seattle on a train and use a decent remix of Roy Budd’s classic theme, but how can you not laugh when it erupts into techno? It’s the first big movie for composer Tyler Bates (BALLISTIC), carrying over from THE LAST TIME I COMMITTED SUICIDE, several years before he became Zack Snyder’s guy and then Rob Zombie’s guy and then the GUARDIANS OF THE GALAXY and JOHN WICK guy.

One other (I think) music related note: there’s a scene where a distorted voice seems to yell at Carter and associates right when a scuffle turns into a car chase. It seems diegetic – I thought it was a cop showing up and scolding them through a loudspeaker, but then it’s not? I determined it must’ve been a sample at the beginning of the song that starts playing, but on the director’s commentary Kay says, without explanation, that it’s his voice. I don’t get it. That part’s weird.

Unlike the previous versions of the character, this one doesn’t bed or romance anybody during his visit. He’s still got the thing going on where he has sexy phone talk with his secret girlfriend back home (an uncredited Gretchen Mol, who had been in Kay’s previous film), who he’s trying to steal from his boss (uncredited voice of Tom Sizemore). But he’s just staying at a normal hotel, there’s no subplot about screwing the bed & breakfast lady.

In fact, the biggest change in the story, and also the thing I find most worthy about the movie, is its emphasis on Carter trying to build relationships with his teenage niece Doreen (Rachael Leigh Cook, hot off of Dawson’s Creek and SHE’S ALL THAT, pre-JOSIE AND THE PUSSYCATS) and the new character of his brother’s widow Gloria (Miranda Richardson, Oscar nominee for DAMAGE and TOM & VIV and Golden Globe winner for FATHERLAND and ENCHANTED APRIL), who quite reasonably is bothered by his johnny-come-lately appearance in her life and blames him for the violence that follows.

I love Caine’s few scenes with his niece in the original, but this version makes her pretty much a co-lead. At the funeral she dismisses Carter saying, “You don’t know me. You’re a picture on the piano,” but later consents to going to a cafe with him. They become friends, and although I’m not sure how much time she’d really make for him, I kind of believe that she’d enjoy the novelty of hanging out with this dude and asking him uncomfortable questions about his criminality, not to mention upsetting her mother by getting to know him.

The best scene is still the one that made me not entirely dismiss the movie when I first saw it twentyish years ago. In this version, Carter discovers a CD with footage proving that an adult (Johnny Strong, who I know as the one main character to survive THE FAST AND THE FURIOUS but not return for any sequels) invited poor Doreen to hang out, and then drugged and raped her. And yes, Carter goes into the standard paternalistic vengeance mode. But before that there’s an entirely unexpected scene where he finds Doreen smoking on the roof of the hotel and tries to talk to her about it without coming right out and saying it. Telling her that she’s special, that “Things happen to us, Doreen, you know,” and “Your mother loves you, no matter what you think, she loves you, maybe you got things you have to talk to her about or some… problems, whatever.” It’s very ROCKY, and kinda monologue-at-the-end-of-FIRST-BLOOD, except he doesn’t let the tears out until he hands the baton to her and she does her monologue about what happened. You just don’t expect an action movie to treat that aspect so seriously, and I appreciate that.

The action is pretty small and straight forward, but has some moments. I like how there’s some random lady on an elevator sensing the tension before she gets off and he beats the shit out of John C. McGinley. And I enjoyed seeing cars tearing around recognizable Seattle streets. It made sense when I saw on the credits that the great Spiro Razatos (MANIAC COP) directed the 2nd unit in Seattle. According to the commentary they filmed right after the WTO demonstrations and for some reason that meant they weren’t allowed to fire off any guns. All the better to drive around real fast, though, right?

Just for the record, this takes place at Christmas time. You see some trees up, Christmas music is playing during the elevator fight, and one of the car chases runs through a tree lot. In case you’re looking for a new family tradition.

Yeah, you know what, I know it’s easy to be mad at unnecessary remakes, but I can’t hate this movie. First of all, it kicked off a few years of lower profile failures that made Stallone hungry enough to do ROCKY BALBOA. That’s a win for the universe. And Stallone is good in it and some of the dumb parts give me a laugh and some of the smart parts actually work. On the commentary track, director Kay doesn’t seem too pretentious or deluded, but does take his work seriously. Take a look at this shot of Carter in a taxi in the rain:

Kay says of that shot, “This stuff with the rain on the windshield and sort of shooting through things as we do throughout the movie is also about perception and about sort of the confusing image of ourselves, how we perceive ourselves.”

I’m not sure that came across to me then, bud. But I don’t want to make fun of it. In general it’s probly better for a director to overthink the ordinary than just not give a shit. His explanation of what he was going for with the movie is admirable, I think: “We set out to make sort of an odd action movie, and that’s what we got, with silence and darkness and alot of humanity, alot of introspection. Some of that is sitting on an editing room floor somewhere, the rest of it you just watched.”

Kay didn’t direct another movie until 2005 (the horror movie BOOGEYMAN starring Barry Watson and Emily Deschanel) and then, you guessed it, he became a TV guy and has done episodes of The Shield, Friday Night Lights, Sons of Anarchy, Taken, The Punisher and Yellowstone, plus true crime TV movies like THE HUNT FOR THE BTK KILLER, THE CRAIGSLIST KILLER and JUSTICE FOR NATALEE HOLLOWAY.

Since then there haven’t been any more official remakes of GET CARTER. Yet.