Suddenly they get to a marsh. The guy’s shoe sticks in the mud. He laughs. “You know, when I saw you I wasn’t scared, but I did wonder why you were wearing those. Now I know.” 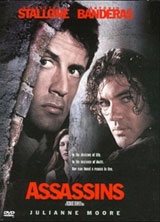 Just the perfect mood, a grim sort of bonding between two killers. He knows he can’t get out of this one so he accepts his fate. And there’s no point in being a dick about it, he’s a murderer too, he knows Stallone’s just doing his job. Might as well make conversation.

I don’t think Stallone talks in the entire scene. He’s really good in this movie. So quiet and his face looks dead of emotion except in little subtle traces. This is one of those “hitman trying to quit” stories, but he doesn’t turn out to have a heart of gold. For all we know it’s just self preservation, fighting back when his people (the CIA?) try to screw him. He fully intends to kill Julianne Moore when he tracks her down, and he only doesn’t when Banderas is there too. See, Banderas is this younger guy who’s been a real pain in the ass lately, he keeps showing up and trying to steal Stallone’s targets. He’s hyper and goofy, and he knows everything about the older assassin, who he idolizes and studies. But he’s okay with killing him, that would be a great honor to him.

The really great part of the movie is when it’s just about the two assassins. They first come face-to-face when Stallone pretends to be a taxi driver and picks Banderas up. So they confront each other through bullet-proof glass, size each other up, then try to figure out how to get around the glass to shoot each other. (Banderas tries shooting through the glass, laughs and says he had to at least try it.)

The story doesn’t fall apart but becomes more standard Hollywood stuff when Moore comes in. She’s a reclusive computer genius who talks to her cats and sets up complicated tricks using remote control cars. Kind of a familiar goofy character doing movie computer hacker stuff. She’s trying to sell a computer disc full of mcmuffiny secrets, Banderas is trying to take her out, etc. Of course she goes with Stallone, they bond, work together to outsmart and outgun the people after them. There is a bank account, a Day of the Dead celebration (the holiday, not the movie), an abandoned church hideout. Movie stuff. Enjoyable, but you’ve seen it before.

That beginning was so good though, I wondered who was responsible, so I looked it up. Turns out the Wachowskis wrote the original script and sold it to Joel Silver around the same time they sold THE MATRIX. When Donner signed on though he didn’t like the script (so why did you sign on, pal?) and had Helgeland rewrite the whole thing. Supposedly he toned down the violence and the love story. The Wachowskis tried to take their names off of it.

Both scripts are online, and someday I’d like to read both versions. But for now I just wanted to see who wrote the scene with the mud and the boots.

The Wachowski script had the scene, complete with the shoe getting stuck in the mud and everything. But in their version there was a long back-and-forth conversation, the guy asking all kinds of questions about how the assassin game works, how he does different things, what’s going through his mind about death, etc. They talk about moon pies. You know – that dialogue everybody tried to do back then after they saw PULP FICTION, but they didn’t think they were copying.

It was the Helgeland version that trimmed down the talking, made the subject more serious, made Stallone quiet and had the line about the boots. So, point goes to Helgeland. You are forgiven for not salvaging MAN ON FIRE.

Antonio Banderas Brian Helgeland Julianne Moore Richard Donner Sylvester Stallone Wachowskis
This entry was posted on Wednesday, June 3rd, 2009 at 12:09 pm and is filed under Action, Reviews. You can follow any responses to this entry through the RSS 2.0 feed. You can skip to the end and leave a response. Pinging is currently not allowed.