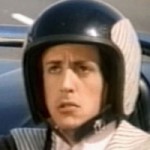 Now by that I do not mean that Entertainment Weekly shit that he is not making hits. There are many actors who are not making hits who are still completely respectable, such as our friend Mr. Eastwood. But Stallone is in the Arnold category, he’s done so much worse than making less money. His good days are so far behind him you almost don’t even associate him with them. First he turned Rambo into an icon and became the symbol of everything that is wrong with our country, our culture, our movies, and our clothes. (I mean that headband looked fuckin ridiculous.) Then he started makin shit like COBRA and DEMOLITION MAN and etc. etc. He fell so hard that even HE started noticing it after a while. So he went through a stage where he was fighting for critical respectability. He tried to go the Travolta route and lobbied for the role of Max Cherry in JACKIE BROWN. When that didn’t pan out he got fat for the role in COPLAND and america was under his spell until, you know, the movie came out. Soon he became so desperate he tried to revive both the Rocky and Rambo series, but luckily that hasn’t worked out yet.

I mean the dude is so easy to hate and laugh at now that you forget that he once was pretty decent. For cryin out loud he was in DEATH RACE 2000. The first Rocky was pretty good too and he Wrote it.

And the one thing I never had the chance to forget, because I never knew it, was that the character of Rambo was actually, at one time, a good character. I never saw FIRST BLOOD until recently and it’s pretty hard after all that came after to go back and admit it but, you know, this is actually a pretty fuckin good movie.

This movie starts out in classic Badass fashion with this Vietname vet John Rambo – dirty, hairy, probaly smelly – strolling into a small town to visit one of his platoon buddies. But the wife tells him that his buddy is dead, died of cancer from the agent orange. He died in the war, he just didn’t know it at the time.

So John turns around and starts walkin for who know where, when wouldn’t you know it the fuckin sherriff strolls up and starts givin him shit about being a suspicious stranger in town, with the nerve to not be driving a car or especially a truck. And to make matters worse the sherriff is Brian Dennehy.

So John has done absolutely nothing, and the sherriff is bein an asshole, and John is real stubborn so he doesn’t take no shit. First the sherriff drives him out of town and drops him off. Then he starts heading back into town.

Thing escalate. Next thing you know he’s arrested. And the other cops start beating him. Except for David Caruso, because he was young and innocent then, and didn’t quite agree with that. But before you know it John fights his way out, steals a motorcycle, drives it up into the mountains, accidentally kills two people in a police helicopter by throwing a rock at them… things escalate like this until he’s skulkin around covered in mud with a knife between his teeth, or gettin eaten by rats, or who knows what.

And then this colonel comes in and starts braggin about what a badass John is and he says, “He’s trained to eat things that’ll make a billygoat puke.”

What’s pretty amazing considering the Reagan era symbol of american brutality that Rambo became, is that this actually started as an anti-war story. The dvd has a real interesting commentary by the author of the book, who explains that the book was written as a way to “bring the Vietnam war home.” To show that when you turn someone into a ruthless killer of civilians, then abandon them, you are asking for trouble. Although the movie was notoriously violent at the time he says the novel was alot more violent, an attempt to accurately portray how vicious the war was.

It’s also interesting that the author doesn’t seem all that upset about what the character later came to stood for. He just mentions that it’s interesting.

As long as you’re able to forget about those other Rambo movies, or all the horrible one-man-army movies that it inspired, this is really a pretty great picture. Despite all the bloodshed the actual climax is at the end when, finally coming face to face with the fucker who trained him and then sent him off into the shit, John gets a chance to really vent. I’m not talking about killing people as a release. I’m talkin about he starts telling the colonel about things he saw in vietnam and then he just starts blubbering. This is actually real, authentic, topnotch acting by Mr. Stallone where he shows his vulnerability, and it kind of makes you uncomfortable.

Like I said I always avoided this picture before and I never knew it would be so emotional.

Warning: If you get the original dvd release of this, don’t expect much out of the extra feature “DOCUMENTARY – FIRST BLOOD: A LOOK BACK.” It is a bunch of clips from the movie set to cheesy dance music. There is no documentary involved.

Brian Dennehy David Caruso David Morrell Jack Starrett Richard Crenna Stallone Ted Kotcheff
This entry was posted on Wednesday, January 1st, 2003 at 7:33 am and is filed under Action, Drama, Reviews, Thriller. You can follow any responses to this entry through the RSS 2.0 feed. You can leave a response, or trackback from your own site.