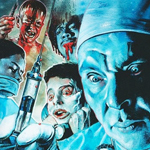 We first see the good doctor (Larry Drake in his feature film followup to DARKMAN) demonstrating an experimental surgery to his colleagues in the observation deck. But then we realize that he’s not supposed to be doing this – he’s escaped his cell in a mental institution, he’s cutting up one of the doctors, and the “colleagues” are other patients. Security there nicknamed him Dr. Giggles because he’s a John Doe and he does indeed giggle alot. Drake is so good at the creepy giggling I wonder if he brought it to the character and they rebuilt the movie around it.

The protagonist/Final Girl is 19-year-old Jennifer Campbell (Holly Marie Combs six years before Charmed), recently diagnosed with a heart condition that may require routine surgery. That’s terrifying to her, though, because her mom recently died during a routine surgery. She’s embarrassed to be wearing a heart monitor and for some reason doesn’t even tell her boyfriend Max (Glenn Quinn during Roseanne, before Angel) that the reason she won’t drink when they go out is because her doctor told her she couldn’t, not because she’s a lame wet blanket who hates partying and fun.

Meanwhile another more rowdy group of neighborhood youths participates in that old small town pastime of breaking into the abandoned mansion that everyone knows belonged to a doctor who went crazy and removed a bunch of his patients’ hearts. That’s Dr. Evan Rendell Sr., and we happen to know that his escaped son Evan Jr. a.k.a. Dr. Giggles is hiding somewhere in here.

Though Dr. Giggles is an escaped mental patient who returns to his childhood home like Michael Myers, he seems equally inspired by Freddy. He makes bad puns and there’s a scary nursery rhyme about him that everybody knows. They also have the thing where the cop who’s newer to town (Keith Diamond, BABY BOY) doesn’t know the whole history and figures out something is being hidden from him, which was not in any Freddy movies at the time this came out, but has since been in FREDDY VS. JASON.

The backstory of Evan Sr. and Jr. is pieced out across the movie. Early on there’s a goofy scene where Dr. Giggles looks at a photo of his father and remembers his childhood, when dad would come home from the hospital or clinic or whatever and he’d be in his room with his homemade doctor gear cutting open his teddy bear to remove some stuffing. He tells his dad he wants to be a doctor when he grows up (yeah, I think he figured that out) and then it pans across to show that he has a whole wall of teddy bears with thick black stitches across their bellies.

We later learn that Dr. Rendell’s whole trip was trying to do the world’s first heart transplant to save his dying wife. Dr. Giggles finds out that Jennifer has the same heart condition that his mother had, and decides to do surgery on her. But he’d probly have even less success than his dad, since he never actually studied medicine, he’s still basically playing doctor.

But he knows all the cliches. He likes to saythings like “Visiting hours are over!” or “Was it my bedside manner?” before he stabs you with a scalpel or slashes you with a bonesaw or stuffs a thing too far up your nostril or pumps your guts out with a machine or whatever. I spent the whole last act wondering if the fact that they hadn’t used “Take two of these and call me in the morning” yet meant they were saving it for a sequel, or actually had too much pride to use something so obvious, or what.(The answer is pretty satisfying.)

He also does more absurd things like leave a voicemail that says “I’m your new doctor, and I’m standing right behind you” and then is sure to be standing right behind you when you play the message. He has lots of bizarre surgical tools (some of his own design) but I’d argue his best move is wrapping a blood pressure armband around a guy’s neck and pumping it to suffocate him. That’s more effective than his second best move: grabbing a human heart out of his buck of human hearts, throwing it at a guy and saying “Have a heart!”

Another colorful part is this cool shot from inside a mouth: 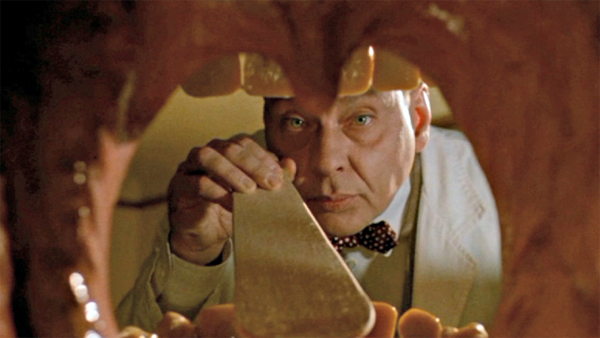 The doctor theming also extends to non-murder scenes. A neighbor is seen watching Ben Casey. A kid is seen playing Dr. Mario. There’s an awkward moment when Jennifer is looking pensively out the window eating an apple just so dad (Cliff DeYoung, THE SUBSTITUTE) can question why she’s snacking right before dinner and she can say, “You know what they say, ‘An apple a day keeps the doctor away.’” (This is before anyone knows there’s a killer doctor on the loose. I wish it was an actual thing where apples ward him away like garlic to vampires.)

I think maybe the best joke is when he removes a bullet from himself like Rambo and so many before him, except he does it laying down with all the surgical blankets laid out and says “Forceps,” and what not to himself as if he’s working with an assistant. (Of course he does drop the slug into the traditional metal canister.)

But the best scare, or at least gross out (because this is legitimately disgusting) is the flashback to the cop watching over the bodies of the senior doctor’s victims and seeing seven year old Dr. Giggles tear out of the stomach of his dead mom, where his dad had sewn him in. Jesus christ, DR. GIGGLES!

Drake was still doing his Emmy-winning and Golden Globe nominated role on L.A. Law, as the lovable, developmentally-disabled Benny. Playing against type had recently hit paydirt for DARKMAN (where he played the sadistic crime boss Robert E. Durant) and the pilot for Tales From the Crypt (where he was an escaped mental patient turned ax-murdering Santa). But this was the one attempt to turn him into a marquee name, and a horror icon. And it kind of worked! It seems to have been a flop, at least in theaters, and never got the long line of increasingly ridiculously sequels it deserves, but I think anybody of a certain age familiar with horror movies thinks of him as Dr. Giggles. I certainly did and I never saw the movie until now.

It has one of the last few scores by the great Australian composer Brian May (MAD MAX, ROAD GAMES, TURKEY SHOOT, STEEL DAWN, HURRICANE SMITH). It’s not his only horror movie though – he also did FREDDY’S DEAD: THE FINAL NIGHTMARE.

There are other ways it has an unusual pedigree for a horror movie. It’s produced by Dark Horse Entertainment, the Portland based comic book publisher turned movie production company behind THE MASK, TIMECOP, BARB WIRE, MYSTERY MEN, HELLBOY, R.I.P.D. and POLAR. I almost watched it when I did a piece on ‘90s comic book movies for Polygon, but I determined that (like VIRUS) they made it a comic book after the movie was already in the works. It’s written and directed by Manny Coto (COVER-UP, STAR KID) with co-writer Graeme Whifler (who must be an interesting dude because he wrote SONNY BOY and directed videos for The Residents, Snakefinger, Renaldo and the Loaf, Oingo Boingo and Red Hot Chili Peppers).

Cliff DeYoung Dark Horse Comics Doug E. Doug Glenn Quinn Holly Marie Combs Keith Diamond Larry Drake Manny Coto slashers
This entry was posted on Monday, November 18th, 2019 at 12:49 pm and is filed under Horror, Reviews. You can follow any responses to this entry through the RSS 2.0 feed. You can skip to the end and leave a response. Pinging is currently not allowed.