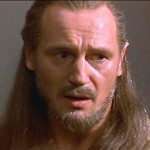 I believe you’re all familiar with the director Sam Raimi. You know – kind of a smart ass, wears a tie, master of energetic camerawork, loves the Three Stooges. These days I guess people just think of him as the guy who did the three Spider-man pictures. Nerds curse his name because although the first two touched their hearts and moved their souls the third one was kind of dumb and had a part where he did an evil dance, and apparently in the comic book it is made very clear that the whole point of the Spider-man character is that he would never do an evil dance like that. The Punisher or Blade maybe would do one under the influence of sorcery or an alien ray, but Spider-man – never. So even if Sam Raimi did direct THE EVIL DEAD, EVIL DEAD 2, ARMY OF DARKNESS, SPIDER-MAN, SPIDER-MAN 2, THE QUICK AND THE DEAD and A SIMPLE PLAN it doesn’t matter, that’s all moot now, like Michael Richards’ comedy after he used the n word.

But with this review we gotta transport ourselves back to the early 1990 when Raimi was an underdog, a cult director who had done two drive-in masterpieces and one disowned comedy, and here he was trying to break into the post-BATMAN studio game with a movie that was big budget for him but small compared to the movies it was gonna be held up against. It’s kind of like a comic book movie: a super hero origin story, with music by Danny Elfman, and with ‘man’ in the hero’s name. It’s also kind of a horror movie: he’s a mad scientist and a burnt up Phantom of the Opera type freak whose scarring turns him crazy and murderous. But mostly I think it’s like an action movie: it has R-rated violence, he’s getting revenge one-by-one on the criminals who wronged him, there’s explosions and stunts, and one of the screenwriters is Chuck Pfarrer, the ex-Navy SEAL who wrote NAVY SEALS and HARD TARGET.

Future Academy Award nominee Liam Neeson plays Dr. Peyton Westlake, a scientist working on a liquid skin substitute for burn victims. When his girlfriend (future Academy Award winner Frances McDormand) discovers proof that her sleazy boss (Logie award winner Colin Friels) is making bribes Westlake gets caught in the crossfire and a gang of criminals blows up his lab with him inside. Everybody thinks he’s dead but his burnt near-corpse winds up a John Doe in a hospital where the doctors take the liberty of giving him an experimental surgery that severes his nerve endings so he won’t feel the burns. The only negative side effects are that he has lost the sense of touch and that he has very sensitive emotions that can cause him to fly into a blind rage with an adrenaline rush that gives him the strength of ten men. Otherwise everything is fine.

Well, I guess the world’s worst ever living burn victim is lucky that he also happens to be the world’s foremost authority on replacement skin. But not that lucky, because he never perfected the formula, the skin melts after 99 minutes in sunlight. At this point, Westlake has a decision to make. He could tell the doctors look, I remember who I am, I’m Dr. Peyton Westlake. I happen to be an expert in liquid skin. Maybe you could help me to perfect it. If not well, let’s see what we can do here. Put me in rehab, help me to heal. Get me a psychiatrist because the healing on the inside will be even harder. Please, contact my girlfriend. I just proposed to her. She thinks I’m dead.

That would be hard work but you would think that’s what you’d have to do. But Westlake is stubborn. Instead he escapes the hospital ODB style, carts his damaged lab equipment to a condemned building and sets up shop. Later he’ll make himself a mask of what he used to look like and go to his girlfriend and not tell her about his burns. But first to get his confidence up he’ll stalk the thugs who attacked him, disguise himself as them and play elaborate tricks to set them up against each other.

When not disguised Darkman has an iconic phantom kind of look – bandaged face, black hat and trenchcoat. And Neeson does a great job bringing the freak out. With the fake Liam Neeson face he’s sensitive and wounded, in the lab out of disguise he loses it, grunting to himself and his cat, sarcastically dancing like the freak he thinks some imaginary oppressor sees him as. I guess he’s kind of like the Hulk, whoes super power is that he has a short fuse. But Darkman’s catchphrase would be “you wouldn’t like me when my feelings are hurt.”

When he does lose it Raimi lets loose with the visuals he was known for back then. Darkman’s world explodes into a psychedelic collage of flames, smoke, the firing of his own synapses and abstract, traumatic imagery, both real and imagined. Then he can toss people around or break the fingers of an unfriendly but otherwise innocent carnival worker. But to tell you the truth the super strength and lack of pain are not that big a part of what Darkman does. He gets more use out of his masks and his deviousness. And he has the balls to impersonate major crime figures while only knowing how to mimic a few phrases in their voices. And there are always unforeseen complications. He keeps coming mask-to-face with the people he’s disguised as, sometimes on accident, sometimes to fuck with their minds, once in a revolving door so nobody knows which is which.

There’s a great action movie type opening, throwing you into the world of two hardnosed crime bosses having a confrontation that turns into a tribute to the HARD BOILED warehouse shootout and involves a machine gun hidden inside a dude’s wooden leg. It’s quite an introduction for the secondary (but most memorable) villain, Larry Drake as Robert G. Durant. That guy was best known for playing a retarded guy on LA Law, so it was pretty cool to see him playing this arrogant asshole who cuts off fingers with a cigar cutter and collects them in carefully sorted display cases.

When the action comes up it’s good shit. There’s lots of jumping across roofs and fire escapes. In my opinion Dr. Westlake was not only a pioneer in skin replacement technology but also in parkour. The showstopping chase with Darkman hanging from a cable attached to a helicopter keeps switching distractingly to greenscreen-type closeups, but still, these days you watch those other shots and you can’t help but be awed. Holy shit, they really did that! Now they’d have some showoffy digital shot with the camera flying through or around the artificial action, but in 1990 they just filmed a real guy hanging off a real helicopter. And there’s a great part where Durant starts busting off explosive shells trying to hit Darkman and doesn’t give a shit that they’re blowing up cars on the highway below. Darkman doesn’t care too much about collateral damage either judging by his decision to hook the helicopter to some poor schmuck’s semi. Luckily the guy doesn’t seem to notice. He doesn’t even slow down when the chopper crashes and explodes.

Let me describe a shot that sort of sums up what was cool about Raimi back then. Darkman and his girl’s boss face off high above the city in the girders of an incomplete skyscraper. The bad guy mentions how many stories they are up, and the camera does a high-speed pan down the (miniature model) structure, all the way down to the ground – where it shows a cluster of rebar spikes sticking out of the ground ready to impale whoever falls. It looks cool and it’s totally excessive because who gives a shit if you get impaled, you just fell down like a hundred stories and probaly bounced off at least 75 different metal girders. Raimi knows the rebar is unnecessary and he knows that we know it’s unnecessary, but we all have an unspoken agree that it should still be shown. Because that’s how we like it.

DARKMAN has just the right balance of cartoonish over-the-topness and serious melodrama to make the phony bits part of the fun. For example I don’t mind accepting that he can scan any flat photograph to make a 3-D model of somebody’s head, and somehow finds the right clothes to wear with the disguises. If you or I were Darkman we would probaly figure out how to do those things too. This is a great movie of its type. It mixes so many of the best types of stories and gimmicks – the tragic monster, the super hero, the master of disguise, the avenger – into such a unique combination. It’s loaded with clever ideas and imaginative visuals, it has an energetic pace, it even has good acting. I like those SPIDER-MAN movies, I even enjoyed part 3 (sorry everybody), but DARKMAN is way more my speed.

Liam Neeson revenge Sam Raimi
This entry was posted on Friday, February 27th, 2009 at 12:08 pm and is filed under Action, Reviews. You can follow any responses to this entry through the RSS 2.0 feed. You can leave a response, or trackback from your own site.