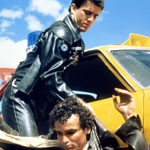 The other police can’t keep up with the cop-killing Nightrider. It’s Max, sitting patiently on the side of the road ahead, who comes in for the close. Since the Rider and his girlfriend end up in a fatal, explosive crash, the Toecutter blames Max and comes after him for revenge. So, if you thought Nightrider was a real charmer and wondered who else he was close with, Toecutter is the answer.

There’s a funny joke where Max goes home after the chase, there is some saxophone music playing and it seems like maybe he’s drinking alone and contemplating life or something. But a change of camera angle reveals that his wife Jessie (Joanne Samuel) is there and she’s the one playing the sax. (There’s sort of a new spin on that in BEYOND THUNDERDOME when Auntie Entity has a personal saxophone player to score her meetings.) It’s hard to think of this as the same Max of legend, who travels around having badass adventures and missing this life. He actually takes the family on vacation. He has friendships and stuff. He has a partner named Goose (Steve Bisley, RED HILL, THE GREAT GATSBY), the inspiration for the movie TOP GUN. Officer Rockatansky has seen some crazy shit, obviously, but I doubt he expects to ever meet a Master Blaster. 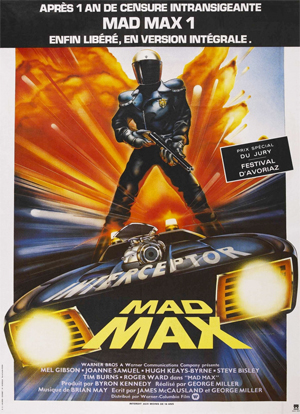 I always forget that his wife lasts most of the movie. It’s not the usual normal life/tragedy/frustration/plot-and-execute-revenge type of story set up. The part where he loses everything and comes up with the premise for the movie SAW is only at the end. In my opinion it is not as well constructed of a story as the sequels. It’s all over the place.

It may be a rudimentary version of first time writer/director George Miller’s eventual mastery of the filmatic storytelling language, but it’s pretty obvious why it caught on: because holy shit these crazy Australian motherfuckers are doing car stunts that you’re not supposed to be able to do. Cars are flipping and skidding out and rolling and exploding, crashing through other vehicles, popping out the other side like a football team through a paper banner. You can’t believe these rookies with no money or local film industry figured out how to do this shit and get it on film and not kill like 50 people. Plus Miller knew how to capture high speed propulsion through editing, sped up film, low angles that make cars look cool, windshield POV shots of roads passing by, vibrating cameras, etc. It’s intense.

It also starts off with a bang because it has probly the most drama-heightening score of any low budget debut (thanks to Brian May, the George S. Clinton of Australia), and then the metallic logo zooms in with a sound effect and slams onto the screen. With lightning bolts! I wish action movies still had this kind of opening credits swagger. I guess THE EXPENDABLES movies gave it a shot. But come on, guys. We all know you’re not MAD MAX, but pretend you think you are. Have some confidence. Just strut onto the screen. Impress us.

I have to admit due to honesty that on this latest viewing MAD MAX was very enjoyable but didn’t quite live up to its legendary status in my memory. The more elaborate design, fantastical world and tight, simple storytelling of the sequels has captured my imagination so much, while also topping the insane stuntwork and crazed characters here, that it seemed like a step back to watch this one again. This time. Please forgive me, my friends. These things can happen, what’re you gonna do?

But also I kept thinking something felt wrong about it. And then I realized it’s because I was watching the real, original version of the movie, which is not what I’ve been watching all my life. I kinda forgot about this, but when the movie came out in ’79 the American distributors condescendingly had the whole movie dubbed so the accents weren’t as thick. I think it’s still Mel and most of the actors, but with the accents toned down. Radio voices sound American and some of the bad guys sound different, exaggerated. Even when the movie first came to DVD if I remember right Americans had to get a PAL import to hear the original soundtrack.

I always thought (well, knew) that that was ridiculous, but I never realized I would end up wanting to keep the bastardized version around. The redubbed voices add a heightened quality that seems fitting, and even catalyzing, for the insane world of crumbling civilization that it takes place in. I had to go back and rewatch some of the scenes in that version.

When I brought this up on the “Twitter” social media platform, Panos Cosmatos (namedrop) put it best:

That’s what it is. It’s not how the movie was meant to be, but it feels like it could be. In a Leone movie or even an Argento you’re used to the voices feeling a little off, a little otherworldly, and it keeps you off balance. That’s what it’s like here too. Good job accidentally adding something interesting, cynical American movie releasers.

Anyway, I am sorry for what I have said here. MAD MAX is still amazing. And in a way the fact that it’s not after an apocalypse – nobody has reached the stage of deciding “For now on I’m a guy that wears a Kabuki mask on a pole above my head” – but it’s still so bad that the roads are completely unsafe for non-crazies, makes it more frightening. It’s a classic, but it’s merely a first taste of greater things to come.

Australian cinema Brian May car chases George Miller Hugh Keays-Byrne Mel Gibson Steve Bisley
This entry was posted on Wednesday, May 13th, 2015 at 7:15 am and is filed under Action, Reviews. You can follow any responses to this entry through the RSS 2.0 feed. You can skip to the end and leave a response. Pinging is currently not allowed.