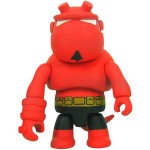 Actually come to think of it it’s based on a comic strip so I would not be surprised at all if you boys heard of it already. This is NOT the Punishing guy, this is a different guy, named Hellboy. 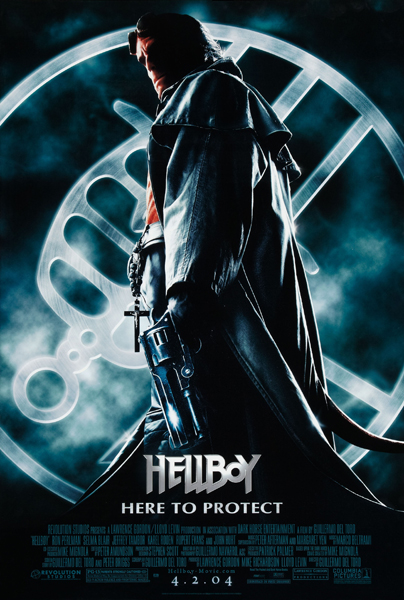 What I liked about this movie was the character of Hellboy, who is played by Ron Perlman (BLADE II). He is a guy from Hell who decides he’s not into being evil. So he does other stuff. I always thought Perlman was funny when he was on that Beauty and the Beast show with the gal from TERMINATOR. Because he is this scary lion man and the women loved him because he was sensitive and wore a blouse and because it was only a TV show so they didn’t have to face the reality of what a guy smells like if he lives in the sewer. Believe me man, you ever spend more than two days in a sewer, hiding out or whatever, it’s curtains for your love life for at least a year. Not to brag or nothin. I guess that is not a brag though. Just my 2 cents.

Anyway the point I was getting at was that when he took the makeup off, he still looked like a fuckin beast. This is a grizzled looking dude. He plays in makeup all the time so I guess it’s no big deal for him to be painted red and have a tail and horns and a giant hand and whatever other shit they pasted onto the dude. He doesn’t even notice, to him it’s just like wearing pants. So he is able to give a real acting performance and make this a great character.

He goes around with his giant hand and he punches through things and gets thrown through things and blows things up. He makes some smartass comments occasionally. It’s real good to see such a combination of makeup and acting to make a classic monster character, like Frankenstein’s monster meets Dirty Harry.

Perlman has made some bad movies before, in my opinion. In this category I would include OPERATION SANDMAN, POLICE ACADEMY: MISSION TO MOSCOW and SLEEPWALKERS. When Mario Van Peebles and Ice-T are put into the Straight to Video Hall of Fame, Perlman will probaly be invited. But I also think he was truly great in CRONOS, CITY OF LOST CHILREN, ALIEN RESURRECTION (as the dumb tough guy) and of course BLADE II. So as long as he’s working with a French or Mexican director he’s good. This one will obviously be one of his signature roles. I hope we get to see him in this makeup again.

Seriously though about that sewer thing, there were legitimate reasons to stay out of sight, I know it sounds paranoid. This was a long time ago when I was young, I would not usually have to do that kind of thing now.

There was nothing I really hated about this movie, but I was not as crazy about the world around Hellboy as I was Hellboy himself. They spend alot of time trying to explain who he is and how he is hidden from the world and what not. My one question about that would be, who the fuck cares. So he is a demon guy – lay off. He doesn’t really look THAT weird. Michael Jackson, for example, is a weirder looking dude than Hellboy. Also, those freaky “chicks” in the trailer for WHITE CHICKS that played before HELLBOY. Thay are WAY scarier looking than Hellboy and nobody locks them up in a room and goes on talk shows to try to create a smokescreen. Just let the dude walk around and fight monsters and shit. He’s obviously good at it.

The director is Guillermo del Toro (BLADE II) and I would HIGHLY recommend checking out this guy’s work. CRONOS and DEVIL’S BACKBONE proved that he was a genius. MIMIC was his worst movie and I still liked that one. And obviously we all agree on BLADE II, except for a couple hotshots in the talkbacks. I would not say that HELLBOY is Mr. Del Toro’s best movie. I don’t think it has quite the crowdpleasing action, asskicking and oneliners that BLADE II did. But that’s not a fair comparison. It is a lot of fun and also has a little bit more emotion in the nice love subplot. And kids will definitely like this movie because it is about a cool monster who fights cool monsters. Plus the bad guys are Nazis, and everybody hates Nazis, except Nazis. And Nazis don’t deserve this movie anyway. I don’t want to be controversial but I hate fucking Nazis. Fuck ’em.

Like the Nazis though, if you are a comic strip guy you might have some trouble with this picture. I talked with my geek culture correspondent, a guy in my Wednesday night creative writing class. I’m not sure what the guy’s spy name would be, maybe Darth Superman. Or Harry maybe you could make up some stupid Dungeons and Dragons type bullshit like Gandalf the Elfmaster or Attack of the Hobbits or something like that, this guy would eat that shit up.

According to my notes here, he has some complaints. He says that in the comics Hellboy is more of a detective who travels around to little European villages, going to old churches, castles and graveyard to investigate ghosts and werewolves and shit. He says there is alot more mythology and ghost stories involved. More atmosphere. Not as much American cities and bureaucrats and product placement. He doesn’t get locked in a room and have agents following him around unless he needs them for the mission.

Also this guy says Abe Sapien (the fishman) should walk around in regular clothes and a fake beard, he should not be locked up in a fish tank. And Kronen is just a scientist in a mask, he is not made of sand and windups (Vern note: who fuckin cares). Also it says something here about pancakes. Can’t read my handwriting.

I guess this guy is probaly right, they could probaly do up a better story if there is a part 2, where Hellboy just steps on and you already know who he is and what he’s gonna do to the stupid tentacled or ghostly motherfucker that gets in his way. None of this explaining bullshit. But still I enjoyed this picture and I got a hunch you might like it better, wetting your pants right and left over this thing, or at the very least wetting them in the front. Good job Ron Perlman and Guillermo Del Toro keep it up fellas.

Guillermo Del Toro Jeffrey Tambor John Hurt Ron Perlman Selma Blair
This entry was posted on Friday, April 2nd, 2004 at 3:56 pm and is filed under Action, Comic strips/Super heroes, Fantasy/Swords, Reviews. You can follow any responses to this entry through the RSS 2.0 feed. You can skip to the end and leave a response. Pinging is currently not allowed.