Sonny Boy (Michael Griffin) is a young man who lives in a metal shed, raised by a small town crime lord named Slue (Paul L. Smith, Bluto from POPEYE) and his lady Pearl (David Carradine – I think he’s playing a transvestite but maybe it’s gender-blind casting). Pearl has been protective of Sonny Boy ever since he was a baby. But obviously not protective enough, since they cut his tongue out (as a birthday present, they say), torture him with fire to give him tough skin, and train him to bite the necks of their enemies.

You know how they used to have stories they told kids about where babies came from, like a stork brings them or they find ’em in a cabbage patch or whatever? Well, in this fucked up family they find ’em in a convertible Brad Dourif stole from a couple he killed at a motel. There are other family members and associates: a weird effeminate guy in charge of disposing vehicles (Sydney Lassick from SILENT MADNESS), a corrupt sheriff (Steve Carlisle), an underworld doctor and Slue’s favorite, the cannon that he uses to fire explosives at his cars or attackers.

Slue is pissed when Dourif accidentally comes home with a baby, but he wants to sell it. Pearl begs him to keep it – I think this is the indication that Carradine is playing a man, because it implies that Pearl has a mothering instinct but no way to give birth. Slue is an asshole but can sometimes give in to the nagging wife, so they keep him and give him a challenging childhood. 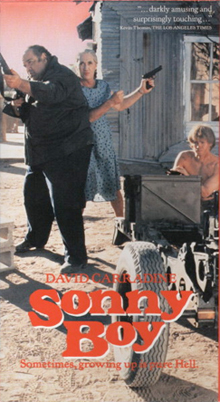 Once he’s grown up the family starts using Sonny Boy as an enforcer, sending him into people’s houses to attack them, like Jet Li in UNLEASHED but without the collar or the kung fu or Bob Hoskins. On the other hand they do have a weird pyramid thing built on their property which is a good place for a climactic shootout to take place. UNLEASHED doesn’t have a pyramid.

Then Sonny Boy figures out how to sneak out of his shed and explore the world. He doesn’t understand the birds and the bees/the motels and the convertibles, and he’s curious. He has major encounters with three women:

1. The lady with the braces. He escapes and ends up in her house stealing cookies and chips. She rightfully chases him off with a rifle, but then holds a grudge and leads the mob of crazed locals trying to hunt “the monster.”

2. The lady he sees having sex in an abandoned house. He smells her panties, she spots him, then her and her boyfriend chase him on a motorcycle and slash him. Not a good early sexual awakening, in my opinion.

3. The girl who discovers him locked in the back of an ice cream truck. It must not smell like piss in there like I’d guess, because she thinks he’s cute and tries to flirt with him. She doesn’t get that he’s a Feral-American, she thinks he’s not talking to her out of snobbishness. But she ends up being the only sane person to stick up for him.

Carradine plays the role pretty much like Divine would: as a woman. The only concession to “don’t worry folks, I’m actually a man” is that he sings the theme song. He’s kind of an interesting character because he seems convinced that he’s a good mother to Sonny Boy, but he’s fuckin blowing it. He says he loves him but jesus. Get that kid out of there if you love him. It’s pretty clear that’s what you gotta do.

Although it’s from 1989 (filmed in ’87), SONNY BOY reminds me most of weird ’70s movies like BAD RONALD and WILLARD. Or also like that ’80s movie WILD THING with the urban Tarzan type guy. But like some of those it’s kinda dry and not as compelling as it oughta be considering all its strangeness. I think to become a great movie it would need a much more magnetic lead performer. Whatever it takes to have a great presence while playing a mute beast-boy, this guy doesn’t have it. And he doesn’t have that lovable maniac side of Tiny from the Rob Zombie movies or Part 2 Leatherface or some of the Hills Have Eyeses, ’cause they’re going for more of an Edward Scissorhands innocence.

He’s not a monster, he’s a blandly good looking dude, and his first person narration doesn’t make him any more interesting.

So it’s not great, but gets by on weirdness. Makes me want to see an epic mini-series from the POV of one of these crazy Texas Chain Saw type families, how they evolve from a family of semi-civilized sickos to total unregulated madness.

I mean, I’m glad they’re accepting of each other’s eccentricities, but somebody should’ve drawn a line at some point.

Additional dialogue is credited to Peter Desberg PhD. If it’s this Peter Desberg PhD then he seems to be an expert on public speaking, an author of children’s books about scary riddles and interactive joke writing software, a composer of songs about computers and accordions, and a black belt in Tae Kwan Do. I like him.

Director Robert Martin Carroll has only done 3 movies, each about a decade apart: PALE HORSE RIDER starring Charlene Tilton in 1980, this in ’89, BABY LUV in 2000. That one sounds like more of a comedy, but also involves somebody who wants to sell a baby. Hopefully they don’t cut its tongue off, or I’m gonna start worrying about this guy.

Brad Dourif David Carradine feral child Paul L. Smith Sydney Lassick
This entry was posted on Tuesday, September 4th, 2012 at 12:30 pm and is filed under Drama, Reviews. You can follow any responses to this entry through the RSS 2.0 feed. You can skip to the end and leave a response. Pinging is currently not allowed.