NOT QUITE HOLLYWOOD is a pretty good documentary with a really good subject: the history of exploitation movies in Australia. Of course, this is a talking heads and film clips movie, that’s about the only way they could do it. And it tries to cover a broad range of movies over many years, so it doesn’t get real deep into anything. It’s more like a real good TV special than a great movie. It’s a primer, an overview, a sampler to get you started. It gives you a taste of a whole bunch of strange movies you might not have heard of before, points you in some interesting directions, tells you a few good stories. And for that sort of thing it’s very good. 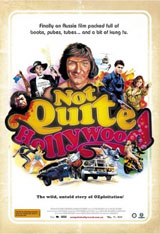 Apparently alot of Australian cinema is built on the success of a whole bunch of sexploitation movies and broad comedies about puking. So the first half of this is mostly movies I wasn’t very interested in. It does show alot of naked ladies though, in my opinion, for what that’s worth. And a few dudes I think too.

The movie is divided into different categories with colorful, stylized intros made by re-coloring and animating stills from the movies. So the look is pretty cool. Also alot of the footage just jumps off the screen with vivid, feverish colors, even those sexplo movies. Not sure but I suspect they digitally enhanced the colors to make the clips look crazier. But I think that’s fine, it just makes you want to see the movies.

Eventually it starts getting into the cars and the giant crocodiles and what not. They talk about pretty much every Australian movie I’ve seen in the last few years: RAZORBACK, DARK AGE, ROADGAMES, WOLF CREEK, ROGUE. Of course they talk about George Miller doing MAD MAX (the guys who did the first SAW and DEATH SENTENCE talk about hearing legends of this doctor who went out and illegally shot car crashes) and even get into him adding the car chases to THE CHAIN REACTION. And they get heavily into Brian Trenchard-Smith. (The DVD has his conversation with Q. Tarantino, not surprisingly a big fan.)

The best part of the movie is the stories about THE MAN FROM HONG KONG and what a dick Jimmy Wang Yu was. Every single person they talk to seems to think Wang Yu was an asshole of such epic proportions they just have to laugh about it or bite their tongue. They say he was such a bastard and hated actresses so much that right before he had a kissing scene he caught a bunch of flies and ate them! In my opinion that’s not cool. Above average martial arts star, but definitely not a courteous man. Let’s see some manners next time, pal.

They also talk about George Lazenby catching on fire, how he did the stunt himself but burnt his hand, then decked Trenchard-Smith for having convinced him to do it. Lazenby is interviewed and doesn’t believe he really did that, but apologizes in case he’s remembering wrong. You see that Jimmy Wang Yu? That’s how a gentleman acts, you fly-breathed prick.

To be fair, we don’t know Jimmy Wang Yu’s side of the story, maybe he had to eat the flies for health reasons or something.

For all the movies they talk about they edit together all the craziest shots and make them look just incredible. Of course, many of them are gonna seem kind of boring when you actually see the whole movie and have to see all that stuff in context. But I think MAN FROM HONG KONG comes close to living up to the impression its clips make. You’ll definitely want to see it after watching those and hopefully you’ll enjoy it.

There are some pretty good insights into the mindset of these filmatists. They seem very self conscious about how the rest of the world perceives Australian film. They keep mentioning PICNIC AT HANGING ROCK bitterly and talk about struggling with their Australia-ness – sometimes not wanting to mention kangaroos or any other cliches of what Australia is like, other times being more wise about trying to take advantage of the unique qualities of their culture and landscape. 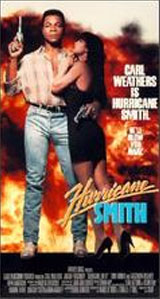 This might’ve been a little more exciting if I’d seen less of the the movies discussed, but I still wound up with a list of at least 7 or 8 titles I want to check out. One of them was HURRICANE SMITH starring Carl Weathers. They don’t really talk about it but its poster is shown in a graphic about a wave of Australian movies that were failures. I always wanted to see this one but was afraid to because I knew it could never live up to the half-rhyming power of ACTION JACKSON. I never knew it was Australian either though so this finally gave me an excuse. It’s part of my Australia studies.

Weathers plays Hurrican Smith (usually not called Hurricane), a dude looking for his sister who went to Sydney and disappeared. He hooks up with a prostitute who was her roommate and the prostitute’s America-hating grandpa. He gets in fights with pimps and other criminals using unconvincing moves like knocking a guy out by punching him in the back. He takes part in some Australian activities like some kind of gambling-on-coin-flipping game. Is that a real thing, Australians, or are you just fucking with Carl Weathers?

See, if that guy in WOLF CREEK had picked up Carl Weathers, I think things would’ve turned out differently. I’m sure they would’ve had a hell of a fight and would’ve had a begrudging respect for each other at the end.

It’s a watchable movie and not really bad, but definitely not memorable. In fact I’ve already forgotten most of it, including the explanation of why he’s occasionally called Hurricane. It’s always nice to see Weathers in a lead role, obviously. But that’s the main thing it’s got going for it. The most NOT QUITE HOLLYWOOD moment is a stunt where he jumps a speed boat through a house. That was cool. But I can see why this wasn’t a smash hit.

Australian cinema Brian Trenchard-Smith
This entry was posted on Thursday, July 2nd, 2009 at 11:53 pm and is filed under Documentary, Reviews. You can follow any responses to this entry through the RSS 2.0 feed. You can skip to the end and leave a response. Pinging is currently not allowed.

16 Responses to “Not Quite Hollywood + Hurricane Smith”