Our heroes are naive Olivia Hussey, sexy Lynda Stoner, and defiant Steve Railsback. Railsback gets a pretty badass setup because the headmaster, Thatcher, lists all the different camps he’s escaped from, and you know he’ll be adding Camp 42 to the list soon. I love Railsback from ED GEIN, LIFEFORCE, etc. but to be honest he doesn’t have that great of a character in this one. He mostly just runs around. Not that he’s not good at running around, it’s just not that memorable a part. 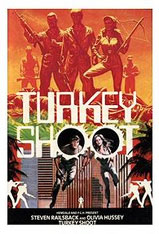 The weirdest moment in the movie is when you first see the wolfman. For some reason one of the hunters has a pet wolfman that he got from a circus. He wears clothes like a pilgrim and likes to eat people’s toes. I guess the guy pretty much uses him as a hunting dog, if a hunting dog could wrestle people and snap spines over his knee.

I mean that’s a pretty big shift in perception, you’re watching a movie thinking “okay, here is this movie, TURKEY SHOOT” and then out of the blue you realize “this is a movie that has a wolfman in it.” It changes everything, you have to adjust every assumption you made back when you thought it was a regular non-wolfman type of movie. 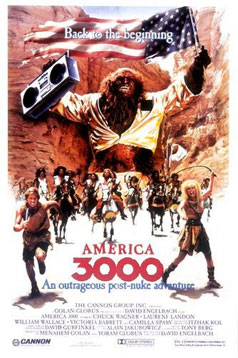 I’ll have to check that one out, because this wolfman was pretty cool and he didn’t even have a boombox or American flag. So it is possible that the AMERICA 3000 wolfman will top this one due to those two props.

Anyway, maybe it’s because of the lack of boombox, but somehow even with a wolfman the movie seems a little bland. I mean, the bad guys are pretty colorful – a cool bald guy with a mustache, a lesbian with a bow and arrow. They get some mileage out of them, they’re more memorable than the heroes. There’s some pretty good gore here and there – an exploding head, an amazing shot of a wax dummy getting machine gunned. And you gotta admire any movie where a character says “Oh shit!” and the reason he says it is because he accidentally cut his pet wolfman in half with a bulldozer and needs to hurry up and fire his bazooka or Steve Railsback will get away. That is obviously a great moment in the history of cinema, but for the most part TURKEY SHOOT still has the lifeless feel of many ’70s sci-fi movies in the SILENT RUNNING vein. Something seems missing.

The DVD extras helped me put my finger on it. They explain that the budget got cut at the last minute, they had to tear out the beginning of the script, cut a helicopter chase, have less extras, less stunts. Trenchard-Smith seems to have only stayed on out of professionalism and not a belief in being able to still pull the movie off. He mentions not being able to have stuntmen fall out of towers, and Anchor Bay cuts in a shot of a watch tower shooting sparks, and that’s it. Nobody falls out and it doesn’t tip over or anything. And I realized that’s it, it just never is able to go that extra distance Trenchard-Smith would’ve in the days of his Grant Page movies (or later in DEAD END DRIVE-IN).

They interview Lynda Stoner, who gets upset talking about it, calling it “juvenile garbage.” It surprised me she talked about it with such disgust because she is strangely un-exploited in the movie. There’s foreshadowing that the guards will manhandle her, or worse, that she’ll mandhandle them. But it never happens. All the manhandleship is saved for Olivia Hussey and her boob double. There’s even an “ogling Lynda Stoner as she bathes in the river” scene where she’s fully clothed!

Her beef is not with her character. She seems upset that the setup of the world – the “1984 scenes” Trenchard-Smith says – were cut out of the script. But I wonder if they were really necessary. We get the idea that people who don’t fit into society’s norms lose their human rights, and aren’t allowed to reproduce. I guess it’s hard to judge without seeing what was in the script, maybe it was some seriously deep shit. But I suspect they were able to imply the important stuff in a simpler way. Why do you need more than that?

You don’t. But you do need guys falling out of towers. So this one’s not that great. Come to think of it, this guy’s made more interesting curiosities than he’s made actual good movies. But oh well, that’s better than most people. Or at least more curious.

Brian Trenchard-Smith dystopian futures Steve Railsback
This entry was posted on Thursday, May 14th, 2009 at 11:41 am and is filed under Action, Reviews, Science Fiction and Space Shit. You can follow any responses to this entry through the RSS 2.0 feed. You can skip to the end and leave a response. Pinging is currently not allowed.