One complaint: why no headbands? I have rarely seen two dudes more worthy of cool headbands. 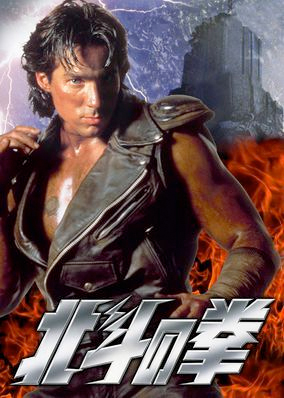 Anyway, Kenshiro refuses the call to heroism, instead continuing to pursue his personal hobby of desert wandering. That asshole Shin murdered his dad Ryuken (Malcolm McDowell, TANK GIRL), kidnapped his fiancee (Isako Washio) and left him for dead after stabbing his fingers into his chest, unintentionally giving him stars in the pattern of the Big Dipper.

(I was gonna joke that it should be called FIST OF THE BIG DIPPER and some of the fight moves should involve dipping people into stuff, but then I read that that really is the direct translation of the original Japanese title.)

The thing that’s great about being The Fist of the North Star, besides being able to walk in the acid rain and make a little blind girl see by shadowboxing next to her (long story) (actually, no, that’s pretty much the whole story) is a secret fighting style that can horribly mutilate bodies or, better yet, cause their heads to bulge and then explode with a bunch of light pressure point hits. He does this trick on Nils Allen Stewart (THE SHADOW, THE MASK, BARB WIRE), first seen in this cool shot through a peephole: 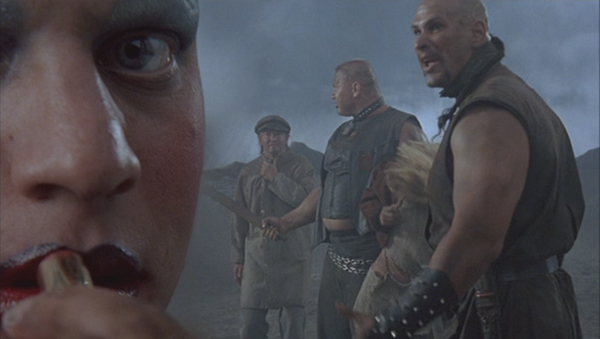 Stewart’s character Zeed asks “What are you trying to do, tickle me to death?” after he does a bunch of rapid air-punches around his head. He just turns to walk away. 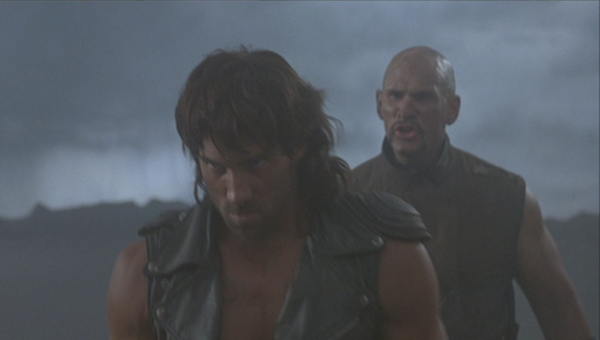 I bet he’s had alot of practice to time that shit correctly.

Kenshiro is haunted by the voice of his father trying to get him to take up the fight against Southern Cross. At one point, dad even possesses a rotten corpse to come out of the ground and talk to him. Kinda more extreme than the ways, say, Mufasa or The Phantom’s dad do it. 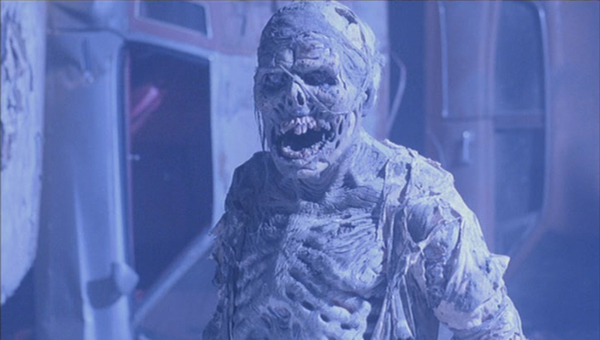 This might be a good time to mention it’s from HELLBOUND: HELLRAISER II director Tony Randel (his followup to TICKS) and writer Peter Atkins (before WISHMASTER). And also a good time to remind you that Atkins appeared in HELLRAISER III: HELL ON EARTH as my favorite character, Kool Aid Man Cenobite. 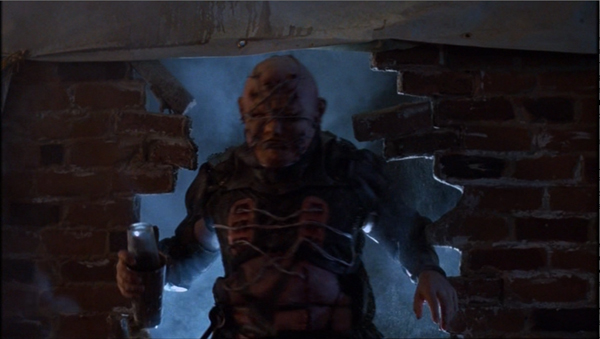 Maybe this doesn’t sound cool enough yet? Well, did I mention that it has a post-apocalyptic settlement where Melvin Van Peebles and Downtown Julie Brown are prominent members of the community? And that Downtown Julie Brown is indeed credited as Downtown Julie Brown? Also Dante Basco (Rufio from HOOK, and Pinball from BLOOD & BONE) is a hyperactive dude who does somersaults and helps train everybody to fight. And sometimes Shin’s gang of “Crossmen” marauders ride in on motorcycles and terrorize everybody, and one of them is Clint Howard so there are a bunch of shots of a camera attached to the handlebars looking up at him as he drives around making his most DELIVERANCE or TEXAS CHAIN SAW worthy faces. 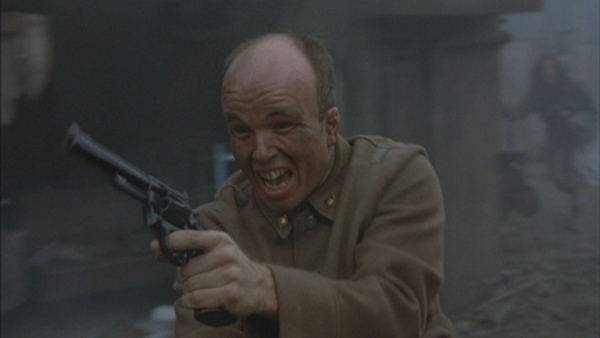 Also the wrestler Vader and Chris Penn (BEST OF THE BEST 1-2) as Jackal, who has a lumpy head like Jason or The Toxic Avenger, but with a bunch of leather belts strapped around it. We learn in a flashback that yes, he put those things on because he got North Starred and the second they come off his head is gonna finish exploding. I mean, you cannot dismiss a movie that offers such possibilities.

There are other weird touches, like when Shin is wounded and the blood not only drips into the form of the Big Dipper, but then catches fire. Is the guy just cursed to always be reminded of his enemy? I bet there’s a deleted scene where his Spaghetti-Os do the same thing.

Mandylor is less exciting than Daniels, but he’s convincingly despicable. I like the part where he makes a musclebound follower (David “Shark” Fralick, BEST OF THE BEST 4) fight him. The guy looks so tough and then he talks in a goofier voice than I expected. I liked that guy.

I mean, the fights could be more elaborate, but Daniels is obviously good, and sometimes they’re shot with cool scenery like this. 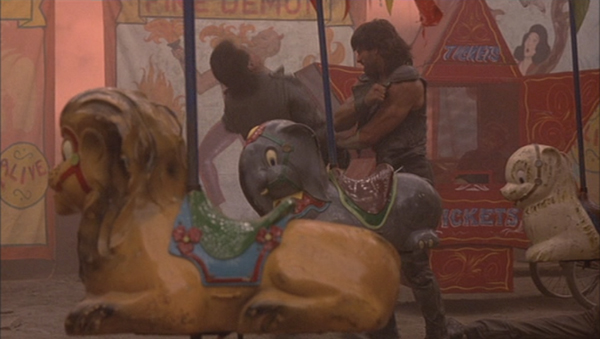 The super powered punches make them fun. I only wish that stuff increased towards the end instead of completely tapering off. Fight choreographer Winston Omega only has a few IMDb credits, but one is CROSSCUT starring Mandylor.

It’s a solid b-movie production with some cool model shots, cinematography by Jacques Haitkin (A NIGHTMARE ON ELM STREET, BLOODSPORT II) and a score by Christopher L. Stone (PHANTASM II–RAVAGER). Apparently the anime is much gorier, and maybe if they’d stuck to that, at least to add an exclamation point on the finale, it would’ve caught on. But the movie was not popular with fans, critics, or other. The DVD has a commentary track with Randel and Daniels, who are good sports about that, and share some good trivia. The banner that says “There’s still time brother” is a reference to Stanley Kramer’s 1959 post-apocalypse movie ON THE BEACH. Julian Sands and Viggo Mortensen turned down the role of Shin. Etc.

Daniels seems very proud of the role. He talks about having recently seen the animated series, as opposed to just the animated movie, and learning things about the character he wishes he’d known at the time.

Within a few years Randel was directing episodes of Power Rangers in Space and Beyond Belief: Fact or Fiction. His most recent film is last year’s A DOGGONE ADVENTURE, scripted by Jim Wynorski. “A telepathic dog enlists a group of fun loving kids to help him solve a mystery. The K-9 detective leads the children down a road filled with action and adventure.”

For Daniels, though, it was a bigger budget than usual, and a cool showcase of his skills, that did not slow a prolific career in low budget western martial arts films. I don’t think it’s anything to be ashamed of. It’s a pretty cool movie.

16 Responses to “Fist of the North Star”