So this is DTV through and through, but the things I liked about it won the fight with the things I didn’t. And the main thing I liked was Eric Roberts. 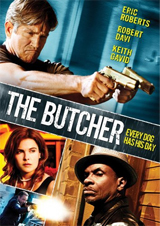 Roberts plays Merle, the ol’ boxer turned aging mob enforcer who the boss thinks is losing his touch because he decided to let some guys go with a threat. A younger guy in the gang tries to set him up for a robbery of one of their rivals. He gets away with some of the loot and tries to plan his retirement while navigating threats from all the involved parties.

Robert Davi (R-Hollywood) plays his boss, Murdoch. Keith David plays his old bookie friend. Michael Ironside makes an appearance, plus Vernon Wells, Jerry Trimble and Duane Whitaker. And good ol’ Geoffrey Lewis has some nice scenes as the guy at the gun shop (an important neighborhood business when you’re in the Butcher’s line of work). I’m surprised they didn’t get Danny Trejo or Lance Henriksen in there, but oh well. The presence of all these beloved veterans brings some gravity to the movie’s main theme of people starting to think they’re too old to do what they wanted to do with their lives, that they’ve let it slip away. And now they’re trying to figure out if they’re fucked or if there’s some move they can pull to change their fate.

For Merle that move is to take off with the money, and he makes the romantic gesture of inviting the waitress he always flirts with to go with him. She’s already discussed with him her depression about her dead end life, and you can see both fear and mischief on her face as she decides to say yes because she’d always regret saying no. Even though she’s the female lead she’s mostly a blank, but it almost works better that way because it makes you fear for her. You have no idea if she understands what she’s getting herself into. For a long time it’s unclear how scared she is or how much she wants a do-over on her decision.

It’s weird, but Eric Roberts really reminded me of George Clooney in this one. He’s a real charmer with a gentle smile, a knack for smooth talking and a confidence that he knows what he’s doing. It was cool seeing him in DARK KNIGHT, but this convinces me he’s got a THE WRESTLER-sized comeback role in his future. (In fact, didn’t Mickey Rourke pretty much say that in his acceptance speech at the Golden Globes or somewhere?)

When Merle decides to make his move he finally cashes in his chips and buys his “babies,” the two gold-plated .45s that Geoffrey Lewis usually lets him look at when he comes in to the shop. Lewis has a look of awe on his face, an almost worshipful excitement that “You’re gonna do it, aren’t you? You’re gonna go out with a bang!” The guns are so perfect they make a vibrating metal sound when you fire them, same as unsheathing a Hatori Honzo sword.

He looks cool with those things strapped to him, especially driving in his badass black Charger. Sometimes I was more afraid for the car than for him, didn’t want to see that thing get the Swiss cheese treatment.

You know how you know Merle is old school? Because his name is Merle. Also at one point the movie uses the song “Tramp”, and I thought that was another good symbol for Merle’s O.G. status, because that song is sampled in several beloved ’90s hip hop anthems including “Jump Around” by House of Pain, “Protect Ya Neck” by Wu-Tang and “How I Could Just Kill a Man” by Cypress Hill. Merle doesn’t listen to those songs, he listens to the source, because he’s a veteran. But upon further inspection I realized that the version that was sampled in those songs was the original by Lowell Fulsom, but the one in the movie is the more famous cover by Otis Redding that came out a couple months after Fulsom’s. So I’m not sure what that symbolizes. Probly something deep.

This might be too much corny cliche bullshit for some of you, but some of it worked for me. I especially liked seeing Lewis playing another great action movie best-friend. I also liked the old-friend talk between Merle and Murdoch even after they’ve shot each other. There’s a moment where Merle is bleeding from a gunshot wound and he’s trying to shake it off, then he just spits on the floor. That’s one I haven’t seen before but it seems right. And the one thing that didn’t seem predictable is that at the end (SPOILER) you find out he did all this because he hated that nickname, The Butcher. That’s a nice touch. The hero is haunted by the title of his own movie.

The filmatism is very classical in style, but unfortunately there’s alot of greenscreen driving shots because of the low budget. Too bad because otherwise it’s a raw ’70s feel, not at all the cheesy trying-too-hard-to-be-modern style that most DTV action adopts.

The director is Jesse V. Johnson, a stuntman going back to TOTAL RECALL, but since ’98 he’s been directing low budget movies like PIT FIGHTER and GREENSTREET HOOLIGANS 2. I know one of you told me I should check some of these out. Let me know which ones are the best.

DTV Eric Roberts Geoffrey Lewis Jesse V. Johnson Robert Davi
This entry was posted on Wednesday, March 31st, 2010 at 1:58 am and is filed under Action, Reviews. You can follow any responses to this entry through the RSS 2.0 feed. You can skip to the end and leave a response. Pinging is currently not allowed.

20 Responses to “The Butcher”