This isn’t a full-on martial arts movie or even on par with a JCVD. This is one of those mainstream-trying-to-come-to-grips-with-something-they-don’t-understand pictures, like a breakdancing movie. While it was written and co-starring the Korean-American martial artist Phillip Rhee, everybody else is a white American (Eric Roberts, Chris Penn), or a respected actor (James Earl Jones). Jones plays the coach and the rest play the five elite martial artists recruited for the U.S. National Karate Team to compete against The Koreans in Tae Kwan Do. 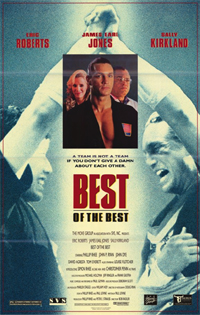 This was 1989, and I got a hunch it was inspired by THE KARATE KID. I think it’s supposed to be THE KARATE ADULTS. They’re all from different backgrounds and have to stop hating each other and become a family. They bond by getting in bar fights and getting worn out in training and eventually become fight brothers as these under-trained, under-funded underdogs head for their match against Korea.

It’s weird – bearded white guys like Chuck Norris and Stephen Hayes created Americanized versions of martial arts, but they at least paid lip service to Asian mentors, teachers, traditions and philosophies. BEST OF THE BEST acts like karate is just a sport like baseball or football. It shows a karate as separated from its roots as American pizza. The character Virgil (John Dye) meditates, but they make a joke out of it, portraying him as an eccentric, tie-dye-wearing new age goofball who might just do that shit to get a reaction out of people. Travis Brickley (Penn) is a cowboy-hat-wearing redneck karate champion who makes racist comments to the one Japanese character in the movie and can’t remember the word for “that raw fish shit” they eat. Later the two shake hands to show that they’ve been through so much together that all hatchets are automatically buried, but it’s kinda bullshit because Penn hasn’t actually paid any penance at all for being a racist asshole.

This team doesn’t have Mr. Miyagi, but they have James Earl Jones as Couzo, a tough coach who yells at them and pretends not to have any type of human empathy. For example he kicks Alex Grady (Roberts) off the team for briefly leaving to see his son after the poor kid got run over by a car. He’s not Pai Mei cruel though, just basketball-coach-who-seems-like-a-real-asshole-but-he-forces-you-to-dig-down-deep-and-discover-your-inner-champion-and-then-you-realize-you-love-him cruel. He says he’ll make them “eat, sleep and shit competition.” If I were them I’d try to impress him by also pissing competition, but they aren’t specifically commanded to do that. The coach seems like a jerk but of course we eventually realize he has a heart of gold and is only an asshole because he thinks he allowed Tommy’s brother to die when he coached that team and “didn’t have the heart to give them rules and drive them to the edge to the point where they hated my guts!”

Couzo’s training methods are mostly making them run laps, sitting in a class room studying files and using Ivan Drago style high tech equipment to measure the strength of their kicks. That’s the way he likes it. But after some initial rejection he’s convinced the team will need to learn some Asian philosophy in order to have the concentration to win. So he begrudgingly takes on a brilliant assistant trainer to get their minds and spirits in shape:

That’s right, it’s the one and only Toshiro Mifune. 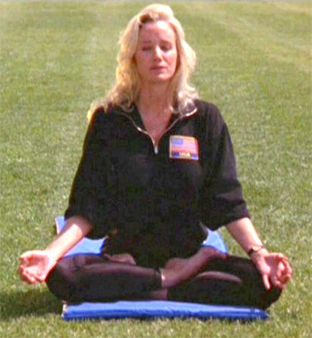 I know, I thought the same thing, but don’t worry, guys. She can help ’cause she was “raised in the far East.” So she hangs around looking serene and calmly recites fortune cookie advice like “Center yourself. Thought and action must be one. There can be no hesitation,” and promises she’s gonna give them “a spirit of peace and clarity.”

At first it seems like Grady is the main character. We see him at home and saying goodbye to his son. Roberts gets most of the melodramatic parts and the crying, but to make him feel better about it he also gets the most macho part, when his arm is dislocated from the shoulder socket and he demands that his people “POP IT!”  back in, then finishes the match basically held together by tape. And no, he doesn’t do a crane kick. He’s not a kid, he’s an adult.

But Tommy Lee (Rhee) also gets some attention as we learn about his brother who was killed in competition by the eyepatch-wearing Korean Dae Han. So Tommy’s here for revenge, but he freaks out when he finds out he really does get to fight Dae Han. Couzo keeps yelling at him for allegedly “holding back.” The movie acts like this is a huge problem for martial artists, this plague of Holding Back their true power. When he finally doesn’t Hold Back he knocks the guy holding the training pads unconscious, and his kick measures off the charts.

I’m gonna not Hold Back myself, I’m gonna go ahead and spoil the whole ending here, so use your own judgment. In the final match Tommy gets into the position of needing 1 point to win the whole competition for the team and having Dae Han in his sights… but Grady and Couzo both see in his eyes that he’s in Not Holding Back mode, and with the benefit of computerized measurements of his kick power they know for a scientific fact that if he kicks this guy he will for sure kill him. So they yell for him not to do it, to not not hold back. And sure enough Tommy manages to hold back and lose the competition. So the lesson is to stop holding back for the beginning of the competition, but start holding back at the end because it’s not worth somebody getting killed.

But BEST OF THE BEST itself cannot be accused of Holding Back in the end, at least in the melodrama department, and that’s why it ultimately won me over. You know me, I’m a sucker for sincere I-need-time-to-change style corniness. So I love that this Dae Han, who we assumed to be evil because he killed Tommy’s brother, not only notices that Tommy just lost the match to spare his life, not only hands him the medal and publicly acknowledges his debt to him, not only sincerely apologizes for killing his brother long ago, but also offers himself up as a new brother. I never saw that coming, and I don’t think I would’ve even if I knew Dae Han was played by Philip Rhee’s actual brother Simon.

So this is some pretty cheesy shit, but if you want to see a long-haired Eric Roberts and the late Chris Penn playing karate experts this is one of your top two choices. I can admit that it’s not as good as THE KARATE KID, but for me its ending has some of the cheesy heart-warming power that one has for you guys. 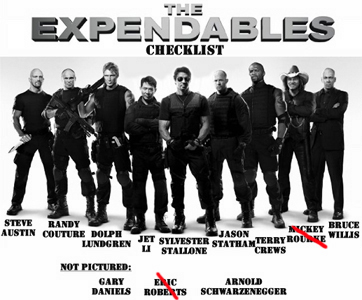 pedigree: I think this passed for a respectable drama. Jones was an Academy Award nominee for THE GREAT WHITE HOPE, although that was back in 1970. But Kirkland had been nominated best actress for ANNA just the year before. Roberts had been nominated for best supporting actor in RUNAWAY TRAIN three years before. Director Robert Radler… well, he never got to go to the Oscars I don’t think. But he later did parts 3 and 4 of the THE SUBSTITUTE series, and I thought those were surprisingly enjoyable.

programming note: I will be reviewing all the sequels, so please don’t use up all your discussion of those in this thread

Chris Penn Countdown to The Expendables Eric Roberts James Earl Jones Phillip Rhee Robert Radler Sally Kirkland
This entry was posted on Tuesday, July 27th, 2010 at 10:03 pm and is filed under Action, Martial Arts, Reviews, Sport. You can follow any responses to this entry through the RSS 2.0 feed. You can leave a response, or trackback from your own site.

30 Responses to “Best of the Best”