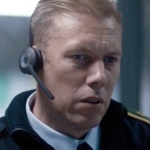 The visuals take place entirely inside a small call center at a police station. The beautiful thing is that it neither feels like a gimmick or a thing they could’ve changed if they’d had a bigger budget. No, it just feels like the natural, best way to tell this particular story.

Asger Holm (Jakob Cedergren, STEALING REMBRANDT) is not normally a dispatcher. He’s a cop who’s gotten into some trouble for something and got temporarily stuck on phone-answering detail as a punishment. He talks loudly about how shitty it is and his hopes to be back on the streets after a court appearance tomorrow morning, an obnoxious thing to do while sitting next to others who do this job for a living, on purpose. 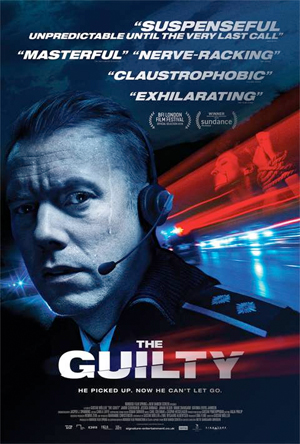 He’s equally dickish to some of the callers, being accusatory and judgmental when, say, he figures out from the details of a robbery call that the victim must’ve been there to pick up a prostitute. He’s basically scaring people away from asking for help from the police.

But in other ways he’s good at the job, and passionate about it. So when he gets a call from a scared female voice (Jessica Dinnage) that seems to have been abducted, he really latches onto it. She can’t talk openly, so he tries to get her to tell him things in code. She has to hang up, but he uses what little information he got to try to piece together what’s going on, what addresses they might be coming from and to, what type of vehicle they might be in. He tries to call the woman’s kids and estranged husband, contacts various related jurisdictions, even gets a friend to go somewhere and break some rules, all in the name of saving this woman.

Is he trying to atone for something? Not at first, I don’t think. But the situation forces him to acknowledge some of his mistakes and flaws. It changes his world view. Like a clever play, it’s impressive how much they can get out of this simple approach. A mystery, riveting tension, twists, a character arc. I don’t really want to see more movies like this – especially because I’m struggling to squeeze a full length review out of this one – but they did a good trick here. THE GUILTY is a THE GUILTY pleasure raves outlawvern.com.

I have a family member who’s a 911 dispatcher. I remember when that Halle Berry movie THE CALL came out – which is also about a call from a kidnapped person, but it shows both sides of the call, and the police response, and the operator eventually goes after her on her own – I asked her about it. She said her co-workers had laughed at the trailer and talked about going to see it together, but it didn’t happen. I thought about recommending this one as a less ridiculous version, but there’s one part where the call gets so bleak I wouldn’t want to recommend it to someone who might have to go through something like that.

But the rest of you, check it out! This is the first feature for director/co-writer Gustav Möller. I rented it after hearing the premise on some random horror podcast. Afterwards I found out that William Friedkin had already raved about it on The Movies That Made Me and that they’re planning an American remake with Jake Gyllenhaal. “We are thrilled to acquire this great IP for Jake,” said Bold Films chairman Michel Litvak (producer of NIGHTCRAWLER). “It’s a terrific vehicle for him to craft a super taut, elevated thriller.” I might have to make that one my first 4DX.

The end. Sorry guys. That’s all I got. More reviews soon.

Gustav Moller Jakob Cedergren minimalistic
This entry was posted on Tuesday, March 26th, 2019 at 11:36 am and is filed under Reviews, Thriller. You can follow any responses to this entry through the RSS 2.0 feed. You can skip to the end and leave a response. Pinging is currently not allowed.

6 Responses to “The Guilty”