You know, in the first UNDISPUTED the Ving Rhames character was clearly inspired by Mike Tyson. I think he was the current-champ, not the former-champ, but he was in prison on a rape charge that he denied. I’m not sure if I thought about it before that when Michael Jai White took over the character for part II it was the same guy who played Mike Tyson! This movie ends with him about to go to prison, so for a real weird experience I challenge somebody to watch TYSON, then UNDISPUTED, then UNDISPUTED II all in a row. 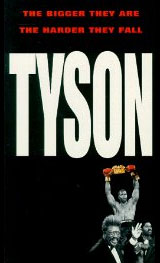 It’s a tough job but I think White does good, somehow changing his gravelly, deep voice into the high pitched Mike Tyson lisp without it seeming laughable. He masters an open-mouthed, dead-eyed look that at times seems kind of blank for the star of a movie but at the same time is very Mike Tyson. The movie starts with him as a little kid shooting at people on a basketball court and ends with him about to go to prison for rape, and he never seems to really mature or learn anything during that time. He’s kind of like a big child who’s just really good at boxing.

George C. Scott plays Mike’s mentor Cus D’Amato, who yells at him for stealing his ice cream but also sides with him when the other people at the gym get pissed at him for dispappearing, getting into trouble and hitting on underage girls. It’s arguable whether this version of D’Amato is a good role model (he does get him off the streets, but also says he should leave school because it’s a bad influence). But this is the best part of the movie, the relationship between the growly old white man and the boyish, muscular punching machine.

Paul Winfield plays Don King as an over-the-top cartoonish supervillain – in other words, he underplays it. But it’s pretty good casting. Robin Givens (Kristen Wilson) is instantly hatable even before she’s supposed to be – talking to Mike on the phone the first time she keeps asking, “To whom am I speaking?” in a fake aristocratic accent. Again, almost too subtle for the real person.

Like any TV biopic it mostly plays as a runthrough of the famous events in the guy’s press bio. There’s even a montage with the newspaper headline “Respect For Tyson Grows and Grows” in order to communicate that in this point of the story respect for Tyson grows and grows. Whenever he’s on TV for a press conference or interview it seems to cut to his family or friends sitting around in a big group watching. That way when he just sits there while Robin tears him up in that Barbara Walters interview we get to see Malcolm Jamal Warner (who plays his best friend by the way) saying they must’ve drugged him. I learned from Wikipedia that there was an episode of THE COSBY SHOW called “Theo and the Older Woman” where the real Robin Givens was the older woman. I wonder how he felt about doing that scene?

Tyson mostly seems like a victim or at least passive witness to the events of his life. He has this talent but he doesn’t really know anything else and therefore people take advantage of him and push his true friends out of the way. The most dramatic scenes are a couple that show him as not just angry but downright crazy. In one he starts berating his sparring partners and beating them to a pulp, in another he’s following some girls and somehow ends up running into the back of a convenience store and getting into a racial conflict with the owners. Malcolm Jamal Warner doesn’t even know what got into him. That was a pretty good scene.

But more often it suffers from the old based-on-a-true-story curse: they don’t really know for sure what happened, and they don’t want to get sued, or look stupid by being wrong, or piss people off by portraying it in a way that they think is wrong. So in most of the controversial areas they imply one way and then don’t set it in stone. Don King comes across as a sleazy con artist, but it never says he’s ripping him off. Robin Givens and her mom seem to be golddiggers (and faking a pregnancy and miscarriage for his benefit), but if so Mike never admits it. We see him just before picking up girls, just before going into the hotel room with Desiree Washington (looking up to no good)… not that I necessarily want to see these things play out, but in every case where the movie has a tough decision to make it chooses the path where it runs away like a sissy.

Another problem is not the fault of the movie, but it’s obsolete now because Mike Tyson got much more interesting after this was made. In prison he converted to Islam, got some crazy communist tattoos, he got the title again and then got far more washed-up before. Plus he got his face tattoo and, most important of all by far, bit off Evander Holyfield’s ear. And a Mike Tyson biography without ear-biting is like NORTH BY NORTHWEST without the cropduster. Maybe they should add some text at the end: “In 1997, Tyson bit off a chunk of Evander Holyfield’s ear.”

Even the earlier events are kind of obsolete now because they’re more interesting told in Tyson’s point-of-view in the TYSON documentary. In fact, this movie is easier on him than that one is, glossing over his extramarital affairs, his crimes when he was younger and his eventual laziness. That one shows more of his flamboyant side too, with all the clips of him saying crazy shit at the ringside. In this one he’s kind of bland.

But don’t worry, if you are disappointed in the movie and it is not yet 1996 there is an offer at the end of the video where you can send in to be reimbursed up to $2.50 for your rental. When I watched it it was 2009 so the offer was no good, but I probaly wouldn’t have sent in anyway. It was about as good as I figured it would be.

boxing George C. Scott Michael Jai White Paul Winfield
This entry was posted on Thursday, May 28th, 2009 at 8:25 pm and is filed under Drama, Reviews, Sport. You can follow any responses to this entry through the RSS 2.0 feed. You can skip to the end and leave a response. Pinging is currently not allowed.