Recently I was reading last month’s Rolling Stone article about the Democrats caving on all the meaningful parts of health care reform. It paints a convincing picture that if they give up on the public option then the plan won’t help much, could even make things worse, will hurt the Democrats politically and hurt the chances of real reform happening any time soon. I thought jesus, what is wrong with these people, we elected them for “change” and now the opportunity to do what we asked them to do makes them run around in a panic, peeing on the floor like a dog on the 4th of July. (Another American reference for you there.) Are they really all in the pocket of insurance companies? They have the majority, they have the majority of the people. You really worried those dumb fuckers at the town hall meetings are gonna be mad if you give them cheaper health coverage? I don’t think that’s worth losing sleep over.

You flash back to a few years ago when the Republicans controlled everything, had everything they wanted, including two wars and all kinds of rampant butt play in their overseas prisons, and still saw themselves as victims. They overplayed their hand. The Democrats are doing the opposite, they have the chance to do something great for their country and their children and grandchildren, they would rather do nothing at all. They’re folding their cards too early. Fuck you motherfuckers. Why can’t somebody cut the shit and stand up for what is obviously right? 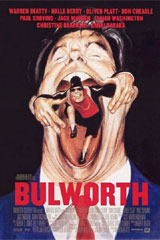 All that was on my mind but also I had recently watched SOUL MAN so my solution was to watch another well-meaning but racially questionable satire, BULWORTH. Starring and written and directed by Warren Beatty, BULWORTH speaks to alot of this anger I have, but it does it in a way that makes me cringe. And I don’t think this is supposed to be uncomfortable comedy like THE OFFICE or something.

Beatty plays Senator Jay Bulworth, a Democrat who’s on the eve of his re-election campaign and hasn’t eaten or slept in days. When an insurance lobbyist (Paul Sorvino, KNOCK OFF) bribes him to kill a reform bill, Bulworth takes out a huge life insurance policy and hires an assassin to kill himself. He’s stressed and has nothing to lose so he just starts Telling It Like It Is at his campaign stops. For example at a black church he tells them that the Democratic Party doesn’t care about them because what are they gonna do, vote Republican? At a Hollywood industry party he says “my people aren’t stupid, they always put the big Jews on the schedule,” then starts flipping through his notes saying, “They must’ve put something bad about Farrakhan in here somewhere.”

In South Central two young (very stereotypical) black women are so impressed by his candid statements that they volunteer for him, which means they follow him around cheering him on, snapping at people and gossiping. He goes to a club with them and, unfortunately, learns about rapping. And starts doing it. Throughout the rest of the movie.

Most of the ideas behind the movie are admirable, and there are other things I like about it, which I’ll get into. But there is no way to get around the rapping. He freestyles horrible nursery rhyme type lyrics and says them slowly, syllable by syllable, in a bizarre style that’s part out-of-touch-white-guy-attempting-to-co-opt-what-he-believes-to-be-black-slang, part speech impediment. He makes Vanilla Ice seem like Rakim or Slick Rick.

Late in the movie, after Bulworth rhymes to Don Cheadle and a gang of underage crack dealers in South Central, one of the kids asks, “Is that how white people rap?” It’s the movie’s only acknowledgment that he’s horrible at it. I mean, I never thought we were supposed to think he was good, but his entourage acts like he is, and nobody ever cringes or runs away like you want to do at home watching the fucking thing. The main joke, definitely, is that all these stuffy white people have to hear rap, and listen to The Truth from this guy, who by the way is on a spiritual quest assigned to him by a homeless street preacher played by the controversial poet Amiri Baraka.

But I guess if you look at ISHTAR (to be honest I’ve never seen the whole thing) it’s clear that Beatty finds something really funny in people performing awful songs. Still, I’m not sure he understands just how painful it is to watch this one.

I remember I read somewhere that Warren Beatty was hanging out with Suge Knight when he made this movie, as research. But I’m not sure he found the authenticity he was looking for. He kind of makes it seem like most black people are selling crack or working for crime lords, but have the potential to do good if only they would decide to get it together. Perhaps when nudged to do so by a white politician. And it’s a little painful to see Halle Berry trying to act “street,” saying “yo” and acting tough. She does look good with dreadlocks though. I can see why Bulworth goes for her. I would think the rapping would actually be a dealbreaker though. This was before Eminem raised people’s standards for white rappers, but I still don’t think anybody is gonna forgive how this guy raps. I sure won’t. Ever. Never forget.

What I do like about the movie is that it comes from a left wing point of view but criticizes the Democratic party as compromised and sold out. From my point of view most Democrats are too centrist, but the mainstream media usually doesn’t acknowledge that point of view. They offer Democrats as the furthest left you can get without being a communist (or sometimes they consider them actually to be communists). Senator Bulworth has sold out his values, promoting himself as more conservative to try to get votes. With Halle Berry he talks reverantly about the Black Panthers, but on TV he complains about welfare being “out of control.”

Usually in a political movie you’re either gonna have one side as the good guys and one side bad, or all politicians bad. In this one Republicans don’t even really figure into it. It’s not about the right wing at all. The blame is on the Democrats, arguing that they are the ones who believe in health care as a right, they’re the ones that should be doing something about it, but they never do because they’re more worried about campaign money than about their constituents and their country and the human race and things that are good. And that’s why BULWORTH is relevant now (despite the rapping), because we have the same thing going on now. Republicans just want to stop health care reform because they want to make Obama look bad, and as a bonus they get to cause the deaths of many poor people, which is a hobby many of them enjoy. But it’s not in their court, it’s up to the Democrats. They could and should do it and would do it if they weren’t mostly a bunch of dumb assholes.

The opening scene is actually a really good one. It’s a montage of Bulworth in his office watching all the different variations on his new TV spots, repeating the same bullshit about welfare and “the new millennium.” And then he just starts to cry. It’s a really effective scene because the commercials seem pretty real and you just have to hear the same phrases over and over and over, not only showing you what empty slogans they are but showing you how he must feel having to say the same shit every time. He just feels like a phony. Because he is a phony.

Believe it or not the movie is scored by the great Ennio Morricone. But then it also uses some great hip hop songs like “100 Miles and Runnin'” by NWA and “The N**** You Love To Hate” by Ice Cube. It’s a bizarre combination, but strangely appropriate. When I reviewed ORCA a few months ago I talked about how Morricone’s music seemed to infuse the whole thing with depth, make it seem profound and poetic. Here’s an even better example of how fucking good the guy is. At the end, Bulworth embraces gorgeous young Halle Berry. As a viewer I’m still thinking this movie is ridiculous and what the fuck would she see in him and no way would this ever happen and neither of them (especially her) are particularly three-dimensional characters, but somehow, with the music, it seems kind of touching, like we have watched these two teetering on the edge of falling in love and invested ourselves in them and now we are relieved to finally see it coming to fruition. Completely unearned by the movie, but collected in full by Morricone.

And the end credits are really cool – a suite of Morricone music with hip hop songs by Ol’ Dirty Bastard and others occasionally fading in and playing for a bit and then drifting away as the orchestra continues.

Yeah, I guess I mainly just like the opening scene and the end credits.

Don Cheadle Ennio Morricone Halle Berry interesting failures politics questionable racial politics Warren Beatty
This entry was posted on Wednesday, September 9th, 2009 at 1:42 am and is filed under Comedy/Laffs, Reviews. You can follow any responses to this entry through the RSS 2.0 feed. You can skip to the end and leave a response. Pinging is currently not allowed.