Surprisingly, Lee’s jazz movie just replaces heroin with other vices. Washington’s quintet-leading trumpeter Bleek Gilliam is some kind of womanizer who tries to have two girlfriends at the same time, med student Indigo Downes (Joie Lee) and aspiring singer Clarke Betancourt (Cynda Williams in her first role). His childhood friend/terrible manager Giant (Spike himself) has a dangerous addiction to sports gambling and is in debt to his bookie (Ruben Blades, SECUESTRO EXPRESS, COLOR OF NIGHT). But these troubles are kind of woven into a casual and down to earth story about Bleek’s fairly minor struggles doing shows at the Beneath the Underdog jazz club, during a slow-brewing musical and love rivalry with his saxophone player Shadow Henderson (Wesley God Damn Snipes, BLADE).

Yes, like all Spike Lee movies, the characters have Spike Lee character names. But this might be the ones that fit the world of the movie most naturally. You also have Bottom Hammer (Bill Nunn, CANDYMAN 2: FAREWELL TO THE FLESH) on bass, Left Hand Lacey (Giancarlo Esposito, FRESH) on piano, Rhythm Jones (actual drummer Jeff “Tain” Watts) on drums, and comedian Butterbean Jones (Robin Harris, HOUSE PARTY) opening. And the doormen played by Charlie Murphy and Steve White are named Eggy and Knowledge Born.

Because of Lee’s objections to BIRD, I figured the stereotype of drug-addicted jazz geniuses didn’t reflect the experience that he saw through his father, but reading up on it now I learned that in 1991 the senior Lee was arrested with a bag of heroin, causing a falling out that ended their relationship. Still, I think Lee’s argument with those other movies might be partly generational. His jazz movie is contemporary, so it’s an entirely different world. In period pieces, jazz musicians are a hip underground subculture demonized by racists and harassed by cops. In MO’ BETTER BLUES they’re well dressed middle class grownups wishing they got more respect from the young people. One of the best scenes in the movie is the drunken conversation between Bleek and Shadow quoted in my LA LA LAND review and sampled as the opening to my favorite album by The Roots, Things Fall Apart. 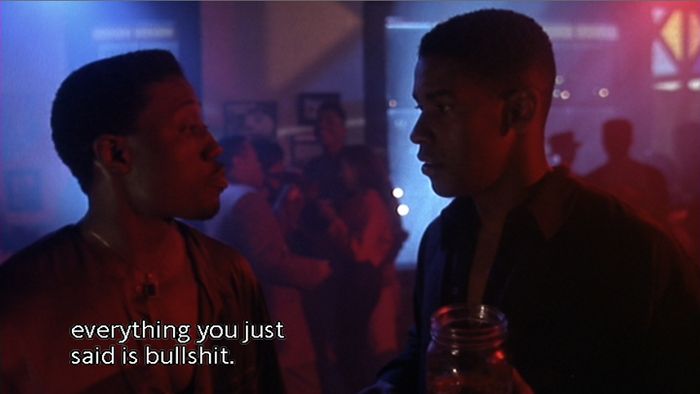 That’s one thing that was really missing in LA LA LAND. When Sebastian complains about people not supporting traditional jazz he could’ve used Shadow Henderson to tell him “That’s right, the people don’t come because you grandiose motherfuckers don’t play shit that they like.”

This is a nice fantasy ’90s where handsome Denzels and Wesleys in colorful suits and hats have nice art deco clubs to have a residency at, and even if the crowds are whiter and more Slabobic than some of them want, they seem to fill the place up every night. Bleek seems to write new songs all the time, inspired by his experiences and conversations. “Pop Top 40,” the one where he does spoken word making fun of love songs on the radio, is the most unique, but putting on a sideways baseball hat and talking in a sarcastic “street” accent verges on turning him into a fuddy duddy, Bill Cosby, pull-your-pants-up-young-man type of guy.

The title song, though, an instrumental tune we see performed in full, is beautiful and catchy.

Bleek is only a small time big deal. Nobody treats him as a celebrity, though he can afford a great loft and we later see that he’s released at least four or five solo albums. His two girlfriends don’t seem to worship his music – Indigo doesn’t like to go out to clubs, and Clarke is introduced interfering with his daily practice routine. She’s the sophisticated, always-dressed-up one, so I was surprised when we saw her at her job at Tower Records. That probly is more of a statement about the cultural importance of record stores at the time than about the character. 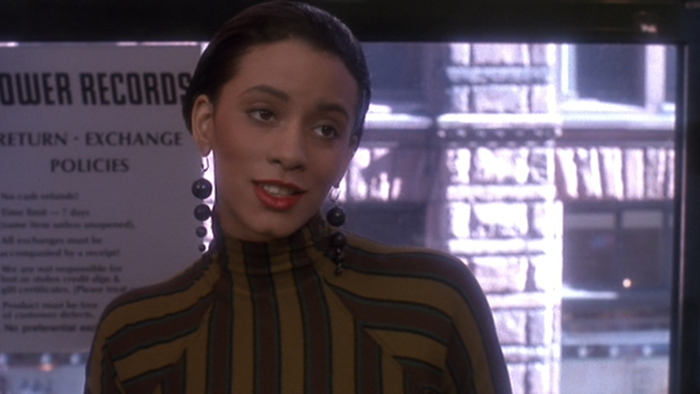 Note: This is when CDs still came in the long boxes! 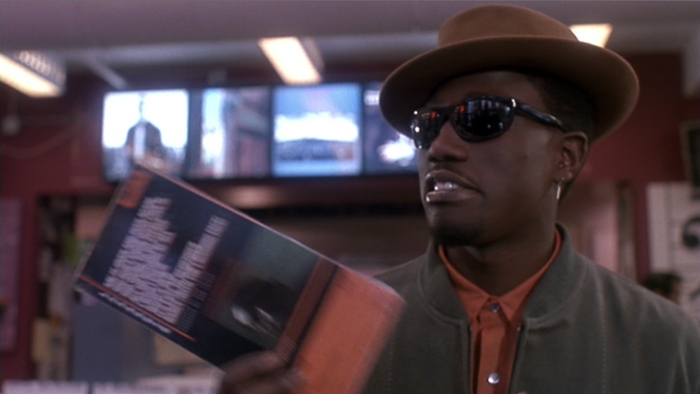 Spike and cinematographer Ernest Dickerson (director of TALES FROM THE CRYPT: DEMON KNIGHT and BONES) go even more colorful and show-offy than in DO THE RIGHT THING. They fetishize Bleek’s lips, fingers and the parts of his trumpet. The opening credits are tinted in different colors like jazz album covers. Colored lights in some locations have a similar effect. 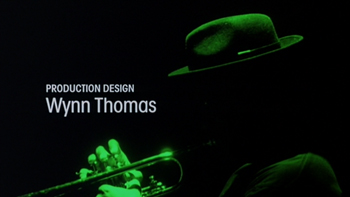 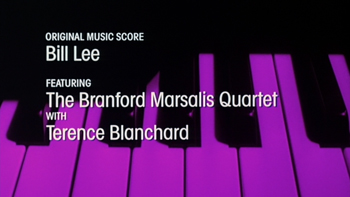 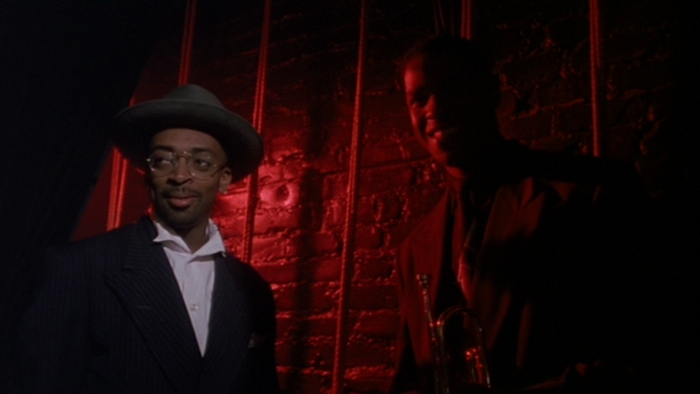 There are multiple instances of one of Lee’s favorite shots, where a camera stays on someone’s face as they are rotated so it looks like the room is spinning around them. In one case it represents Bleek’s mental focus as he air-fingers and hums a trumpet solo to himself – the rotation stops and the lighting changes when a doorbell breaks his concentration. The technique is used even more powerfully for a dizzying sex scene/argument where he can’t keep track of which girlfriend he’s with. (Credit also due to editor Sam Pollard, beginning a long collaboration with Lee. He also did STYLE WARS, JUICE and SURVIVING THE GAME, and actually got his start as an assistant editor on GANJA & HESS, which Lee remade as DA SWEET BLOOD OF JESUS.) 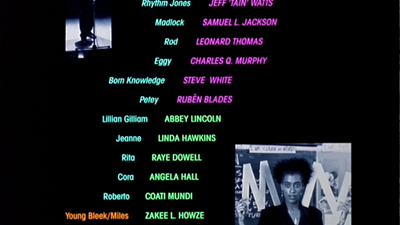 A random, playful touch: Flavor Flav’s voice is heard talking over the Universal logo. “Yo Spike! Start the movie, G!” It’s like when the Gremlins take over the projection booth. He’s credited as “Impatient Movie Patron.”

And I don’t know, do you think you’d be able to guess that these end credits (right) came from a Spike Lee movie? I feel like maybe I could figure it out.

Also, the end title could be considered sort of a reference to the DO THE RIGHT THING poster: 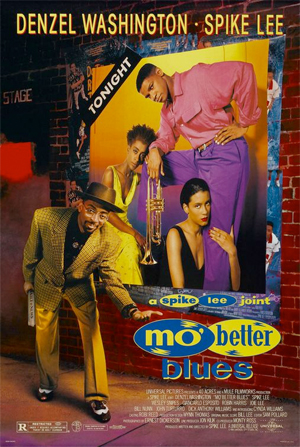 And while we’re on that topic, hats off to the distinct style of poster and logo design for Spike Lee’s joints. How many other directors have a specific, original style of poster art for most of their movies? Wes Anderson is the only one that jumps to mind. Most of Lee’s (including both DO THE RIGHT THING and MO’ BETTER BLUES) were designed by a guy named Art Sims.

MO’ BETTER’s has so much going on: the garish primary colors, the gig-poster-within-a-movie-poster, the fact that Spike Lee’s character Giant is sort of presenting Bleek Gilliam to us, but also the famous director Spike Lee is presenting his new movie to us. And you probly already noticed this, but Bleek’s poster is plastered over a bunch of DO THE RIGHT THING posters. Movie posters don’t usually get that meta in my opinion.

There’s another DO THE RIGHT THING connection in the movie when Bed-Stuy neighborhood DJ Mister Senor Love Daddy is heard on the radio… but then all the sudden Samuel L. Jackson shows up in the same scene, playing a very different character (a loan shark who beats the shit out of Giant).

Lee also gets Denzel into a Yankees uniform, though not from Jackie Robinson’s era, and number 24 instead of 42.

There are a few uncomfortable-and-not-in-a-good-way elements in here. First of all, John and Nicholas Turturro’s characters Moe and Josh Flatbush, the moneygrubbing Jewish cartoon characters who own the club. Lee understandably wanted to make reference to the history of exploitation of black artists, but to do it through these painful stereotypes is embarrassing.

Second, it’s kinda weird to imagine Lee directing the scene of his own sister being almost raped. It’s actually a very effective scene of Bleek at his lowest moment, knocking on Indigo’s door late at night, crazed, having ditched her and not spoken to her for over a year, now he tells her he wants her to have his son and he’s grabbing her and shit, a horribly upsetting turn. And she sees through him and tells him to leave repeatedly but then she looks into his eyes and, shit, it’s Denzel, so she changes her mind and lets him carry her upstairs and (SPOILER) it turns into a skillfully constructed, rapid-fire montage of marriage and graphic birth and happiness and everything set to A Love Supreme.

I also have a suspicion that Spike agrees with his character’s belittling of Left Hand for having a French girlfriend (Linda Hawkins). Most of the band treat her as a trespasser in the dressing room, and scoff at them for saying it’s because she’s white. She may be intended to fit the Yoko-Ono-broke-up-the-Beatles stereotype, but (like Danny Aiello in DO THE RIGHT THING) these actors invest their characters with a humanity that transcends that role. Left Hand’s outrage gets less traction than Buggin’ Out’s, but is generally more reasonable.

The arguments between the band members – with Bottom Hammer usually trying to make peace – are some of the most fun in the movie. Murphy and Harris get some probly-improvised laugh out loud shit talking in, and White (who you may remember as da-Mayor-hassling Ahmad in DO THE RIGHT THING) is really funny preaching his 5% stuff while letting people into the club. But my man the Daywalker definitely steals the movie. He’s a little devious but alot cool.

Like many of Lee’s movies, I’d like MO’ BETTER BLUES to be more thematically focused, but I enjoy going through these experiences with these characters, some laughs, some tragedy, painted with such distinct visuals and sounds. I love that when (SPOILER) shit turns serious, Shadow – who has finally gotten fed up with Bleek and come to blows with him – immediately abandons the feud, calls him “my friend” and goes to bat for him. And man, the scene where post-injury Bleek sits in with a now-more-successful Shadow, really gets to me. It’s a great moment of friendship and growth and fight brotherhood, but Lee goes for heartbreak instead of triumph.