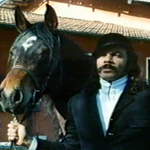 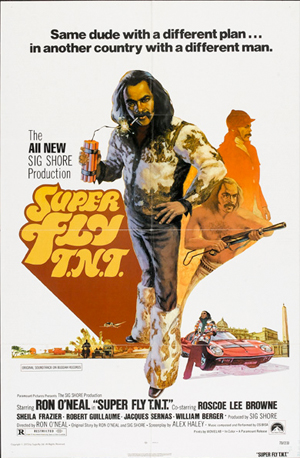 In SUPER FLY, when he talked about retiring, his partner was skeptical, asked him what the fuck he would do with his time if he wasn’t pushing dope. He said pimping was the only other thing Priest could do, and that he didn’t have the stomach for it. Well, T.N.T. answers the question of what he’d do: he’d drive around Rome in a Lamborghini, play poker with other rich guys (at least one of them an exiled criminal like himself, and another one Robert Guillaume), take horse riding lessons. That last one is played for laughs, with Priest resorting to threatening the horse with a brick, telling it to “get it together, baby.”

I think it’s also a symbol of his emasculation. He has to chase down a guy he catches tailing him, but he’s wearing his riding outfit so he just looks like a complete jackass. Not quite as menacing as when he chased the junkie mugger in the first one and beat him until he puked in front of his wife and kids.

Now days Priest doesn’t have to do shit like that. He just lives a life of luxury with his girlfriend Georgia (Sheila Frazier, returning from part 1). When he’s not in the riding outfit, though, he doesn’t tone himself down. You won’t believe this outfit he wears at the beginning, looks like it’s made out of cow fur. A bold choice. The kind of flamboyant that’s almost like a fuck you. He wants our attention but doesn’t need us to be impressed by what we see.

T.N.T. is like MAGNUM FORCE in another way: it questions the values of the first one, or at least clarifies them. Believe it or not the screenplay is by Alex Haley! This was before Roots (his book or the mini-series), but he was no up-and-comer. He had interviewed Martin Luther King, Jr., Muhammad Ali, Miles Davis, Quincy Jones. He’d sat down with Malcolm X and written his autobiography with him, that’s something. Eight years after the publication of that book he’s writing his only screenplay. Just as he told us the story of how the street hustler Detroit Red became Malcolm X and then El-Hajj Malik El-Shabazz, he tells us how the cinematic symbol of amoral success that is Youngblood Priest could possibly grow a conscience. The director is Ron O’Neal himself, so I’d guess that was a journey he felt the character needed to take.

In SUPER FLY there’s a scene where black militants ask Priest to “invest in the community.” It seems like a shakedown and he chases them off with a fiery speech about how when they’ve got guns and they’re ready to go shoot Whitey, then come talk to him. In T.N.T. his bluff gets called because he meets Dr. Sonko (Roscoe Lee Browne, the narrator from BABE) of the Liberation Forces of Umbia, apparently a country in Africa although I really don’t remember them mentioning it in that Stetsasonic song.

It’s supposed to be a poor African country run by white colonialists, and this guy wants Priest’s help in an actual honest to God revolution. Okay, so the doctor doesn’t actually have the guns to shoot Whitey with yet, but that’s what this is all about, the doctor thinks Priest can use his underworld connections to get him the weapons they need.

Now the opening scene makes sense – Priest driving his Lamborghini through Rome was intercut with the Umbian rebels’ struggle, as if to say this is all going on in the Motherland while Priest lives high on the hog. Dr. Sonko lectures Priest about his responsibility to the people of Africa, about how he forgets that “we are not free,” and that he’s “the worst kind of slave.” He lays it on real fuckin thick, and Priest still doesn’t go for it. “Look, don’t start giving me that brother shit. Not today, all right?”

But it gnaws at him. He wants to take off before he’s asked again. The hero refuses the call. They’ve tried living in New York, France, England and Norway, and he wasn’t happy in any of them. Georgia wants to stay (and drive his car) and she’s tired of running. So instead of moving again Priest decides to take a vacation. You know, somewhere nice. Perhaps a small war-torn African country.

This is a great musical montage in the tradition of the first SUPER FLY, but instead of the underbelly
of New York we see the working people of Umbia (filmed in Senegal), fishing, weaving, boating, carving wood, carrying goods in baskets balanced on their heads, playing, reading. And no one can match Curtis Mayfield, but somebody had the legitimately great idea of hiring Osibisa, a Ghanian band who fit right into the tradition of blaxploitation funk, but with extra tinges of African pop horns and acid rock guitars.

This is like Malcolm X’s pilgrimage to Mecca, it’s the moment when Priest sees how life is in another part of the world and his whole context changes. He comes back and tells the doc he’ll do what he can to stop so few white people from keeping so many black people poor.

Like the first SUPER FLY there are definitely some slow parts. In fact the big action centerpiece is a really long poker game that he has to win to get the guns. (Good thing he had a good hand. Spades, by the way. I gotta assume that was intentional.) And I was surprised when it ended – it feels like it’s gonna have another part about fighting the revolution, but it’s really about this one mission of getting the guns there. (Maybe this is where they got the structure for HUNGER GAMES 2). Alot of it reminds me of that great movie HIT!, with alot of intense recruiting and planning leading up to a big covert action, but admittedly this one has less of a payoff.

At the beginning it feels like it might be more of a genre formula than the first one, but it ends up being less. Still, it is very successful as a portrait of this guy being put through the ringer and achieving some sense of enlightenment and redemption. He’s captured by racist white colonialists, they try to break him down by keeping him in a dungeon, whipping him, beating him. But he endures and escapes, we assume the rebels got their guns, and he can go back to his girl and his expensive car in peace.

Of course, this introduces a different type of moral ambiguity than in the first one. Because of how the world is now I at first assumed those rebels were the bad guys, the doctor some kind of warlord. I hope those Umbians got out from under white minority rule, but it’s hard to believe the next regime pulled the people out of poverty, or kept the peace. We’ve given enough guns to enough rebels to see enough ways that can go bad. Priest may feel he did his good deed for the day, but let’s hope it didn’t turn out to be his RAMBO III.

Ah hell, it’s a fictional country in my opinion. Let’s all agree that shortly after the movie concluded there was a revolution and it turned into an African utopia. This is a uniquely thoughtful sequel that truly progresses and responds to the first story. I guess I can understand why it doesn’t have a great reputation: it asks you to question what you liked about the first one, and it gives you something very different in its place. It’s not what you expect, it’s not more of the same. But that’s why I was so impressed.

Now that I’ve seen it I have to say that this is a chapter of the SUPER FLY saga well worth remembering. Put this shit on disc, you guys.

Alex Haley blaxploitation Robert Guillaume Ron O'Neal Roscoe Lee Browne Sheila Frazier Zero External Reviews on IMDb
This entry was posted on Tuesday, April 22nd, 2014 at 2:14 am and is filed under Crime, Reviews. You can follow any responses to this entry through the RSS 2.0 feed. You can skip to the end and leave a response. Pinging is currently not allowed.