None of this is relevant here though because this is part 3 in the ART OF WAR series. 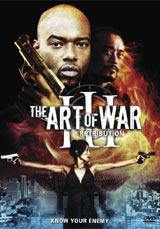 Remember, there was a movie called THE ART OF WAR. I’m a huge Wesley Snipes fan and even I don’t give a shit about THE ART OF WAR. It’s not even that bad, it’s just completely bland. Now somehow here we are with part three. “Agent Shaw is back in this new action-packed international thriller!” says the back of the screener, reminding us that apparently Wesley’s character must’ve been named Agent Shaw. Now, like James Bond before him, Agent Shaw is being re-interpreted by a new actor. After a lengthy international casting call they remembered that Treach from Naughty By Nature was down with O.P.P., other people’s parts, in this case Wesley’s part from parts 1 and 2.

This is not your father’s Agent Shaw. This is an Agent Shaw for a new generation. (It is your father’s rapper-turned-actor though if you didn’t get that “O.P.P.” reference.) The new Agent Shaw is less of a smooth operator and more of an ebonics-speaking, running in half-cocked shit talker type of secret agent. He doesn’t seem as smart as the old Agent Shaw but he must be because he manages to take care of business in the end (SPOILER).

Here’s what I remember from the other chapters in the series:

Part 2 – his sensei was a transvestite, he fought a guy on a boat

I’m sure part 3 will soon join its ancestors in the memory hole, but for a while it’s kind of more fun than those. Treach is no Wesley either as an actor or a martial artist, but I enjoy his earnest performances in above average DTV movies like LOVE AND A BULLET, TODAY YOU DIE and CONNOR’S WAR. Here he’s extra corny with his GHOST DOG style Sun Tzu voiceover interludes. Of course he’s an opinionated agent at odds with his superiors who gets sent on a dangerous mission monitoring an arms deal in South Korea. His whole team gets killed except for the white guy rookie he has taken under his wing. He absconds with a hot Korean lady and has to stop nuclear weapons from getting to a UN summit while the authorities are on the lookout for the black American they think murdered a prominent businessman. There is kicking, shooting, chasing, hiding, sneaking, etc. They steal a car with flames on the side, which seems like a weird strategy, but it works out okay.

The action is competent, without many Avid farts. I like the cartoony bit where you see Shaw with two guns, then he looks at something, then there’s a shot of a “flammable” symbol on some barrels, then a shot of his adversary looking at the barrels, then saying “Oh shit!” and running away as the barrels get shot and explode.

Unfortunately the filmatists (director is Gerry Lively, DUNGEONS & DRAGONS: WRATH OF THE DRAGON GOD) seem to blow most of the good secret agent tricks in the opening. Shaw manages to foil a suicide bombing before I even realized he was in the movie. Then he assassinates the same guy the bomber was after, tells the bomber “not on American soil” and stabs him to death. I guess he was there to kill this guy but happened across a suicide bomber? I’m not sure. The writer is Joe Halpin, long-time Seagal collaborator and specialist in these convoluted cloak and dagger tales. At the end it gets kind of complicated, which isn’t really what I’m into for DTV action, but it’s appropriate for a secret agent series like this I guess.

Missed opportunity: there’s a shootout on a driving range, but nobody hits any golf balls at anybody, or even swings a club. No, it wouldn’t be an efficient way to fight, but it would be a cool way.

If you plan to see this then stop reading, but if not I guess I’ll tell you the best line. Agent Shaw kidnaps that lady and she becomes an informant for them, and he ends up sleeping with her. (Kind of sleazy because he sends his partner on a risky mission to get equipment, then stays at the hotel and gets laid.) At the end she turns out to be a bad guy, so he says “I liked you better with your mouth full.”

Now, if the women’s studies class is reading this I should say in his defense that this lady had a gun on the UN Secretary General – a woman, by the way. If she shot her they’d probaly just get a man in there again. So cut Agent Shaw a little slack for that comment, maybe.

This one was actually made before part 2, but when Wesley agreed to do a sequel they bumped Treach to part 3. That’s known as the “Larry Drake in DARKMAN 2 Precedent.”  I have no idea why it’s called “Retribution” though, that doesn’t really fit the story.

It does seem like they want the series to continue. Shaw quits (you know how secret agents are always fed up and want to quit, maybe they should unionize I guess) and it’s implied that if he doesn’t come back they’ll have to kill him. So it leaves it wide open for a sequel – he could be pulled back in and go on another mission, or he could be on the run. Or he could be recast as Mario Van Peebles or Michael Jai White or somebody.

DTV DTV sequels Joe Halpin Treach
This entry was posted on Monday, August 10th, 2009 at 12:56 am and is filed under Action, Reviews. You can follow any responses to this entry through the RSS 2.0 feed. You can skip to the end and leave a response. Pinging is currently not allowed.

6 Responses to “The Art of War III: Retribution”