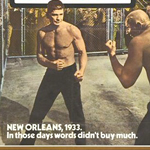 We don’t know what his deal is, but he approaches Speed (James Coburn), the manager of the losing fighter, and convinces him to get him a fight. Speed has no faith in him, but he’s got nothing to lose because Chaney has a little wad of life savings to put up the bet himself.  There’s a big buildup as everyone scoffs at him and then, as in so many of this genre later on (BLOOD AND BONE, NEVER BACK DOWN, DIGGSTOWN, ONG-BAK, LIONHEART, UNLEASHED [suggest others in the comments and I will add them to the list, I know there’s a million of ’em]), he K.O.s the guy in one blow.

Have you guys ever seen this Youtube video? This is pretty good here.

When I first saw that I wasn’t sure if it was real or not. I didn’t realize it was somebody recording the filming of a scene I’d already seen in NEVER BACK DOWN.

Actually, this could be instructive. Let’s do a comparison for you film school students. Let’s see what happens when you do it more professionally with a camera swooping around on a crane, a  bunch of edits and whooshing and speed ramping and rock ‘n roll and what not.

It’s way better in the one shot, no edits version, right? Not that I’m always against a bunch of flashiness (and Hill uses similar techniques in his much later fight circuit movie UNDISPUTED) but the timing of the joke is perfect in the other one. Some asshole flipping around, it gets so over the top you’re wondering what the fuck this guy’s deal is, and then BAM!

Well, HARD TIMES isn’t as minimalistic as a cell phone recording, but I think the lesson here does apply. It benefits from simplicity in story, character, dialogue and style. It doesn’t do a flip and a one-armed hand stand for you. It just waits for its moment and then it strikes.

Anyway, Chaney pulls one of those punch outs, and now all the sudden Speed gets excited about his prospects. The fun of the movie is in the contrast between these two characters. Chaney only talks when necessary. He won’t commit to a career or even the next fight. Coburn is a chatterbox who wants to go all the way with this. He brings in an opium-addicted otherwise-would-be doctor named Poe (Strother Martin, TRUE GRIT, ROOSTER COGBURN) as part of the team, and he borrows the seed money from dangerous gangsters. He’s basically living off of credit card debt, but there’s a noticeable lifestyle gap between these two. Chaney stays in a dank hotel room and seems half-surprised when the sink works. Speed lives in an apartment that’s a little spare compared to actual rich people today, but he has a balcony with a nice street view and big enough to hang out and have a leisurely breakfast. He sleeps in late and has a bathrobe and everything. Livin it up.

There’s zero talk of fighting skill, style, strategy or training. There’s no appreciation for sport. It’s only about winning the money. The fight scenes are of course not up to modern choreography and stunt standards, but they are well done. Reflecting the style of the time they are mostly boxing matches, but they sometimes kick or do a headlock or something. Some of them go on for a while and get pretty grueling.

The story is mostly dealing with the problems surrounding the fights. When they go out to a Cajun crab bake/fight out in the booneys the losing promoter refuses to pay up and pulls a gun on our guys. Chaney plays “it’s not worth it” peacemaker and gets everybody to back down and leave without the money. But then he takes them to a bar that the welch owns, humiliates him in front of everyone and shoots the place to shit. Speed and Poe giggle in delight as they watch it go down. They can’t believe their luck being in with a guy this awesome.

That’s the other thing about this movie is its worshipful portrayal of Bronson. Obviously we’re all watching a Charles Bronson movie because in our opinion he’s Charles Fucking Bronson, and first time director Walter Hill is on the same exact page as us. When Chaney decides he’s done, gives Speed and Poe most of the money (and his cat) and walks off into the sunset, they’re disappointed but also in absolute awe of his perfect state of manliness. They could not have possibly encountered a more inspirational specimen of an honorable drifter badass. The last scene is a mundane conversation about their plans for the day, but they’re both sitting there with eyes wide, their thoughts clearly not on the topic at hand but on this amazing dude they got to work with briefly. They kinda look like they just came one inch from being crushed by a train and the adrenaline rush was glorious.

Bronson was in his early 50s in this movie, fighting shirtless, and it doesn’t seem phony when he beats up bigger guys. For him times aren’t that hard, because he’s Charles Bronson. He can handle it. For us it’s alot harder. He’s alot to measure up to. But we can try.

Bronson’s opponents in the movie include Robert Tessier (THE LONGEST YARD, HOOPER) and Bob Minor (COMMANDO, ACTION JACKSON). It was Roger Spottiswoode’s last movie as an editor before graduating to directing movies like TERROR TRAIN and TOMORROW NEVER DIES.

It was a solid directing debut for Hill. At that point he’d written several movies including HICKEY & BOGGS and THE GETAWAY, and did you know he was second assistant director on THE THOMAS CROWN AFFAIR, BULLITT and TAKE THE MONEY AND RUN? But this a pure vision of sparseness and masculinity that got the ball rolling for his next two movies, THE DRIVER and THE WARRIORS.

Bob Minor Charles Bronson James Coburn Robert Tessier Roger Spottiswoode Strother Martin Walter Hill
This entry was posted on Wednesday, March 11th, 2015 at 9:32 am and is filed under Action, Reviews. You can follow any responses to this entry through the RSS 2.0 feed. You can skip to the end and leave a response. Pinging is currently not allowed.