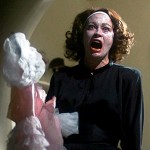 The first thing you’ll notice about the movie is that it’s very stylish. The opening and various other scenes use split-screen up the wazoo, splitting the screen into something like six different little boxes to show the different people intersecting for a heist. The cinematographer is Haskell Wexler (see TELL THEM WHO YOU ARE above for more on him) so despite all the showoffery in the editing alot of the footage is very handheld, documentary looking, like you’re there. Alot of the scenes are just dialogue-free footage of Steve McQueen as Thomas Crown fucking around. For example he flies in a glider or drives around really fast in a dune buggy. The dune buggy footage is pretty spectular, it seems like he’s about to flip over at any moment and you can’t help but notice he’s got no roll bars above his head. 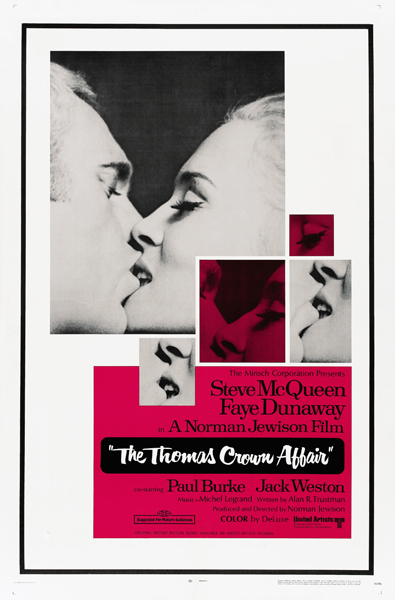 After the opening heist, the rest of the movie is about a hot insurance investigator (Faye Dunaway) tracking down the mastermind Thomas Crown and seducing him, toying with him, falling in love with him and finally realizing maybe she doesn’t want to bust him. It reminded me a little bit of OUT OF SIGHT and the whole romance between bank robber and federal marshall.

My biggest problem with the movie is that Steve is not playing a badass. He’s playing Thomas Crown. Thomas Crown is some rich fuck from Boston, an upper class businessman type. Highly educated, never worked a day in his fucking life. I don’t mind Steve McQueen stretching and getting to wear nice suits, in fact I think he does a good job playing this suave and charming type. But the character just doesn’t have what we as Americans look for in a Steve McQueen character, or in any anti-hero. He doesn’t even take any part in the heist, he just tells other people to do it and then picks up the money afterwards. Then he goofs around on a beach and chases pussy for most of the movie. If he ran from the cops or punched a guy at any point in the movie, I already forgot about it.

There’s a commentary track with director Norman Jewison on the dvd, and he says that Thomas Crown is some kind of anti-establishment type fighting the man by stealing money from instituations. But I didn’t get that out of the movie. He seems more like part of the establishment seeing as how he tells other people what to do then takes the money and lives like a king. You gotta feel more for the hardworking lower rung individuals in the Thomas Crown robbery organization. You got Yaphet Kotto in there for a little bit. You got a fat guy driving the money away in a station wagon, he gets some good scenes with his family after the heist.

But it’s still a watchable movie with some good touches. My favorite is the scene where Thomas Crown gets all the money from the robbery, then he sits down in his office and just starts laughing. Another part I liked is when the insurance agents call in Thomas Crown and the getaway driver at the same time and spy on them in the waiting room through a two-way mirror. Since Crown went great lengths to hide his identity from his guys, they don’t show any sign of knowing each other. That part kind of reminded me of DAY OF THE WOLVES.

Anyway, THE GETAWAY is more my speed for Steve McQueen bank robbery movies. Do what you want, though.

Faye Dunaway heists Norman Jewison Steve McQueen Yaphet Kotto
This entry was posted on Saturday, February 25th, 2006 at 7:05 am and is filed under Crime, Drama, Reviews, Romance, Thriller. You can follow any responses to this entry through the RSS 2.0 feed. You can skip to the end and leave a response. Pinging is currently not allowed.