I believe come this Fall many of you will agree with me on this, and even for those already on board his status in your internal action hero rankings will be elevated. In October you’ll get to see him in the very entertaining blaxploitation homage BLACK DYNAMITE, where he gets to show both his badass presence and his previously untapped comedy chops. That’s a long time from now but you’ll only have to wait until September 15th to see him in a serious DTV action vehicle called BLOOD AND BONE. 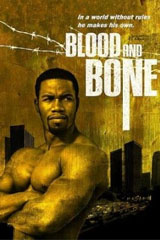 Okay, that’s a few weeks away. I’m jumping the gun on this review. But that’s because this is the best DTV movie I’ve seen in a long time – in fact one of the best I’ve ever seen. If it wasn’t MJW I wouldn’t have known to watch it because it’s yet another underground fighting movie with a bunch of mixed martial arts star cameos listed on the back. These things are spreading across the DTV world like tent caterpillars and they’re usually unwatchable. I don’t know about you but I’m not entertained by 90 minutes of strobelight, guitars and shirtless giants behind chain link fence. But that’s not what this is, and it doesn’t really have much to do with real “MMA,” it’s about flying kicks. It’s more like Van Damme’s LIONHEART, and on par with many of the movies from that era that we still e njoy.

MJW is introduced in a prison bathroom. He stands with his back turned to Kimbo Slice and a gang of rapists. He’s so unconcerned that he rinses his shirt in the sink while they threaten and berate him. Then he turns around and gives them until the count of five. Of course they try to laugh it off so he fights them and within seconds he has Kimbo on the floor whimpering and clutching the shank in his chest. MJW says, “I want you to tell every motherfucker behind these bars that if they get the notion to fuck with me – don’t.” And then BAM, the title slams on the screen.

That’s what I call the declaration of badass intent. You immediately know the movie is serious about delivering. It’s like Seagal throwing that pimp through the windshield in OUT FOR JUSTICE. If a movie has a badass opening and then the title strikes like a flash of lightning that’s usually a good sign.

Out of prison, MJW (who says to call him “Bone” but never says it’s his name) finds a place to stay and quickly shoves his way into a circuit of underground fighters. He clearly has his eye on a rival fight manager named James (Eamonn Walker) and his lady (Michelle Belegrin). James is a great villain. He’s a cruel pimp, he loves his pitbulls, he doesn’t drink or do drugs but keeps his women hooked on heroin so he can control them. He doesn’t believe in cursing (“Remember, profanity is a brutal vice. He who uses it is no gentleman”) so when he starts to swear toward the end you know Bone is getting to him.

He also has the best “Just How Evil Is He?” killing-a-henchman scene I’ve seen in a long time. It takes place at a dinner party where he entices a white guy into a singalong of Wang Chung’s “Dance Hall Days” to lower his guard before chopping him with a fuckin sword and then kicking him to death. And I know it’s only Wang Chung but I’m surprised they were ab le to get the rights to that. I’m glad they did, so everybody could have fun tonight, etc.

Another thing: I like an action movie villain to be a westerner who loves swords, especially when this is established at the beginning to set up a sword fight at the end. James and Bone also share an interest in Genghis Khan, so there’s some quoting that goes on. (Surprisingly there’s no mention of Sun Tzu in this one.)

As evil as James is, there are times when you kind of like him. He has a goal of infiltrating an elite consortium of international rich assholes who bet on the highest stakes underground fighting matches. His connection is Julian Sands, who bluntly tells him that he doesn’t want to hang out with black people. He makes “African-American” sound like a racial slur. So James tells him his theory of how big dicks caused slavery.

He’s a menacingly intelligent and cold-blooded villain and it’s a real “I gotta look this guy up on IMDB” performance from Walker. I cannot emphasize enough how rare it is for a DTV action movie to have a really good and memorable villain. Or a modern action movie in general – anybody remember who the bad guy in TRANSPORTER 3 was?

And the hero is just as good. MJW seems just as deadly and vicious as he was in UNDISPUTED II, but not an asshole. Actually he’s a sweetheart, he looks after women and keeps promises and what not. It’s kind of a Seagal approach in the sense that he’s indestructible, he defeats almost every foe he encounters without getting hurt. He’s outnumbered but I’m not sure if you can call him an underdog. There’s no training (well, he does some tai chi). The appeal is not in seeing him improve but in seeing people shit their pants when they realize their ten giant musclemen can’t take this guy and that he will stop at nothing.

But his background is even more mysterious tha n a Seagal character. We hear about a guy who was framed for murder, and I assumed that was Bone, but it turns out to be somebody else. So at the end you realize that you don’t know how Bone learned to fight, how he learned to shoot, why he was in prison or even what his name is. And then he says “I got some business to take care of” and walks off into the sunset.

MJW is on a roll because his last DTV movie was Isaac Florentine’s UNDISPUTED II: LAST MAN STANDING, the only DTV sequel I like better than the theatrical original. The director is Ben Ramsey, who wrote the recent DRAGONBALLS movie which I haven’t watched but I’m familiar with his previous directorial work, LOVE AND A BULLET starring Treach. I consider that one of the better DTV movies because it’s a pretty clever take on the “hitmen as working professionals” cliche. That was a good-for-DTV script but it was lacking in the action scenes. This one has really good fights and a slicker look than that one.

Credit is due to J.J. Perry, listed as stunt coordinator here, and he was the fight choreographer for UNDISPUTED II and THE SHEPHERD. I also want to acknowledge the writer, Michael Andrews, who did a great job with the underappreciated art of the action script. He follows the formula the right amount to give you all the types of thrills you hope for, but also puts in enough subtle tweaks that you know you haven’t seen one exactly like this before. The story is good enough to take seriously but then you get some crazy moments like when James attacks Bone with a sword, Julian Sands watches for a little bit and then yells “Ohara!,” at which point some dude throws Bone a sword. As if he’s been holding it at the ready until Sands calls him to action. I think we could all use an Ohara standing by for situations like this.

Another crazy touch: the villain gets raped du ring the end credits. No bloopers, no singalong, just prison rape. People who write these types of movies usually get shit on for supposedly being unoriginal but I think it takes a special talent to play an old song this well, so hats off to Andrews.

I demand BLOOD AND BONE 2. There are so many directions it could go. We don’t even know where this guy lives or what kind of life he left behind. They could reveal why he went to prison and have him get revenge on some motherfucker for that. Or he could stay mysterious and his business could be some other revenge. He’s serious about keeping promises, and you never know how many other people he promised to get revenge for. It could be a whole series, a guy who travels around getting revenge on behalf of various dead people. As long as they can get more great villains like James I know Bone will know what to do.

I declare BLOOD AND BONE probable best DTV of the year (although I’ll have to see Seagal’s THE KEEPER, Lundgren’s ICARUS and Adkins/Florentine’s NINJA before I can be sure). If you’re a fan of the early Van Damme movies and that type of thing I think you should definitely see this. And if you get the notion to fuck with it – don’t.

Ben Ramsey best DTV movies DTV Eamonn Walker Gina Carano J.J. Perry Kimbo Slice Michael Jai White MMA underground fighting
This entry was posted on Sunday, August 16th, 2009 at 10:38 pm and is filed under Martial Arts, Reviews. You can follow any responses to this entry through the RSS 2.0 feed. You can leave a response, or trackback from your own site.