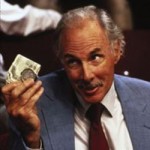 The movie starts out with a robbery sort of like the dog race robbery Hill wrote for the remake of THE GETAWAY, except that the movie rushes through the robbery part and focuses on the escape. Right away you know you are in for a treat with this movie, because it’s some of the most intense car chases I’ve ever seen. Lots of car’s–eye-view shots as the driver swerves through oncoming traffic, red lights, parking garages, narrow alleys… he’s got 2 or 3 cops right on his ass everywhere he goes but he keeps managing to run them off the road or fake them out and leave them in the dust.

When the POV is not on the hood of the car, most of the time it’s inside the car, with the Driver staring ahead emotionlessly and the two gunmen sitting in the backseat, watching the cops through the rear window. You really feel like you’re inside the car, not sure you’re gonna get away with this, but hoping you will. I love when he cuts through parking garages and you hear the sirens echoing all over the place.

It occurred to me while watching this that alot of the time in movies when there’s a car chase, you are with the cop car that is trying to catch the other car. This one puts you firmly in the getaway car and you’re definitely rooting for them to get away. And they do.

Watching this movie, you really come to appreciate the skills of a high level getaway driver. I’m sure they get paid about the same price as those NASCAR fuckers, but what they do is so much more challenging. They are dealing with unpredictable terrain and obstacles, and also they get shot at alot. If they were shooting at each other in NASCAR then maybe I’d watch it, but probaly not unless they dropped all the corporate logos and maybe went off a few jumps or did some side wheelies or something. I mean those fuckers with the patches and the mustaches, they may be good at driving around in a circle but I bet you put them in a getaway car they’d turn into a timid 15 year old with a crisp new learner’s permit. Getaway drivers are the real talents of the racing world, and yet they almost NEVER get their picture on mugs at AM/PM. It’s bullshit, man.

The Detective knows exactly who the Driver is, he just hasn’t been able to pin anything on him yet, and when he finds a witness, she pretends she can’t identify him. So he ends up busting another crew after they knock over a grocery store, and makes them a deal: they can do a ten year bid, or they can set The Driver up by hiring him for a bank job.

The best scene in the movie is when these knuckleheads drive their orange Mercedes into an empty parking garage to meet The Driver. They scoff at his price, asking how they know he’s worth it. So he hops in the driver seat and demonstrates – tearing through the garage, spinning out, slaloming through the concrete pillars, tearing through the place in reverse, practically making these guys shit their pants. Or maybe he does make them shit their pants, if so Walter Hill did not make it clear enough that they shit their pants. Anyway after they tell him he’s made his point, he starts intentionally crashing into things, ramming into the walls, taking off both the bumpers by hitting corners at the right angle. Then he stops, opens the door — but instead of getting out he backs up and takes the door off on a pillar.

(Maybe they tricked me on this one – I didn’t rewind it to check – but I could swear the way they shot it, it had to really be Ryan O’Neal driving for this shot.)

Then after he’s completely destroyed their car he tells them, “I don’t work with people like you.”

There’s one chase scene that’s on foot, that involves two characters, a bag of money and a train. That also reminded me of THE GETAWAY, although in this case it’s a scene that comes from Jim Thompson’s novel and not just Walter Hill’s two screenplays for the movies starring Steve McQueen and Alec Baldwin, respectively.

Speaking of great crime writers, I first heard about this movie on a fellow geocities web sight, The Violent World of Parker. It’s about Richard Stark’s Parker novels (that’s the character Lee Marvin plays in Point Blank, Mel Gibson plays in Payback, Robert Duvall plays in The Outfit and Peter Coyote plays in Slayground). The author of that sight considers The Driver to be a “Parker-like” movie, if Parker were a getaway driver instead of a thief. I think it’s a good comparison. This is a straight up tough guy movie, very low on dialogue, high on action and scowling and authentic detail. It’s very simple in its plot and characters, so it’s appropriate that none of the characters have names. (I coulda sworn Bruce Dern called the Driver “Carter” near the end, but the Norwegian DVD I was watching didn’t have English subtitles so I couldn’t verify it. [Come to think of it, I should’ve turned on the Norwegian subtitles. God damn it Vern, you really fuckin blew it.])

This is definitely one of the best not-very-well-known crime movies I’ve come across in a long time. Now that you know about it, you should see it.

Bruce Dern car chases getaway driver Isabelle Adjani Ryan O'Neal Walter Hill
This entry was posted on Sunday, September 5th, 2004 at 9:49 am and is filed under Crime, Drama, Reviews, Thriller. You can follow any responses to this entry through the RSS 2.0 feed. You can leave a response, or trackback from your own site.

3 Responses to “The Driver”