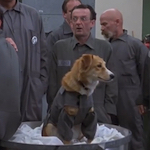 You may have thought I was done with the weird dog movies of summer ’91 after the ROVER DANGERFIELD (plus 101 DALMATIANS re-release) review last week, but if so you forgot all about the live action division. August 9, 1991 also saw the release of BINGO, a pretty odd movie about a kid whose family moves, leaving behind a dog he had secretly befriended, E.T. style.

It’s directed by Matthew Robbins, who as a writer contributed to George Lucas’ original THX 1138 short and Spielberg’s SUGARLAND EXPRESS and CLOSE ENCOUNTERS OF THE THIRD KIND, and as a director gave us CORVETTE SUMMER, DRAGONSLAYER, THE LEGEND OF BILLIE JEAN and *batteries not included. He doesn’t have a credit on the screenplay here – that went to newcomer Jim Strain.

Bingo is a dog who lives with a circus. One day he has to fill in for an injured poodle, but he freezes when he’s supposed to jump through a flaming hoop – a flashback tells us that his mother was killed in a pet store fire. (I sincerely love the shot of puppy Bingo mourning at his mother’s grave [with flowers!] like he’s Bruce Wayne or somebody.) His trainer Steve (Simon Webb, one episode of MacGyver) tries to shoot him, but Bingo escapes because Steve’s Peg-Bundy-looking-wife Ginger (Suzie Plakson, MY STEPMOTHER IS AN ALIEN) at least briefly sympathizes with him, telling him to run away and “Do whatever makes ya happy!

Meanwhile, some dorky kid named Chuckie Devlin (newcomer Robert J. Steinmiller Jr.) is being teased by the other kids and then crashes face first in a creek after going off a jump on his bike. Bingo (who apparently was camped out in the woods with a mini-tent and everything?) drags him out of the water, performs CPR, dries his clothes on a clothesline and catches him a fish. (But when a bear arrives he doesn’t know how to fight him, just how to climb a tree. What a worthless dog!) 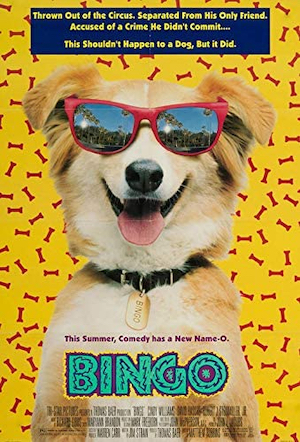 Chuckie takes Bingo home, but has to hide him because his dad Hal (David Rasche, Sledge Hammer!) hates animals. But they sneak around and play together. Like DON’T TELL MOM THE BABYSITTER’S DEAD, SUBURBAN COMMANDO, SCANNERS II and TERMINATOR 2 this has a scene at an arcade. The joke is that Bingo is really good at some game I didn’t recognize.

Hal is a Denver Bronco, and we see that the entire bathroom, bedroom, welcome mat and station wagon are Broncos themed. Even the garden is planted in strictly Broncos colors. This amount of company pride is funny because he gets traded to the Green Bay Packers.

So Chuckie suddenly has to move, and can’t find Bingo to hide him with his belongings because the dog is off Rover Dangerfielding a neighbor dog. He finishes up in time to chase the car T-1000 style, but he can’t keep up. So the conceit is this is a road movie where Bingo meets different people and has various hi and low jinks as he tries to follow the family via a trail of pee Chuckie leaves at each stop.

PEE-WEE’S BIG ADVENTURE seems like an obvious influence, though this is not nearly as funny or stylish, and composer Richard Gibbs (keyboard player for Oingo Boingo who had already done SAY ANYTHING…, A GNOME NAMED GNORM and a couple other movies)’s country/bluesy score is a little too wacky (though thankfully not imitating Elfman). Tim Burton regular Glenn Shadix (HEATHERS) shows up as the owner of a famous hot dog restaurant that actually steals dogs and uses them for meat. Bingo ends up locked up in the back, where little dog paws pop out of the cages holding mirrors to see each other like it’s prison. Bingo leads an escape and crashes a truck into the side of the place – more proof that he’s more capable than Lassie or somebody.

My favorite section of the movie happens after Bingo discovers two criminals, Lennie (Kurt Fuller, MIRACLE MILE) and Eli (Joe Guzaldo, CODE OF SILENCE), who have taken a family hostage. He reports the crime via Morse Code over a pay phone, and ends up testifying against them in court. At one point the defense lawyer has the court reporter read back some of his testimony, so she barks. After being falsely accused of robbing an armored car, Bingo is imprisoned for contempt of court.

So this dog is dressed in a dog version of prison clothes and sent to human prison. And some of the things that would happen in a normal prison movie happen to him, like Lennie and Eli are there and they keep threatening him and try to stab him in the laundry room. (He is not pressured to join a white supremacist gang, unfortunately.)

You can look down on me for this, that’s fine, but I really think it’s a funny joke when the screws come in and break up a scuffle and one of them yells “If I ever find out who’s doing all that barking…” And anyway he befriends his cellmate (Wayne Robson, POPEYE, PARENTS) and they plan an escape, which of course involves digging.

Bingo manages to find Chuckie, but sees him walking another dog and is too heartbroken to reveal himself. He finds a depressing job as an assistant dishwasher. You know, he comes in there, card in his mouth, and punches in.

I can’t defend it but there’s lots of stuff in here where people treat a dog as a person and it’s amusing to me. Or where the dog is amazingly smart but the people are too stupid to pick up on it – like when Bingo shows up at the family’s door to try to tell them Chuckie has been kidnapped, but Chuckie’s mom (Cindy Williams, MORE AMERICAN GRAFFITI) doesn’t recognize him and says, “Who are you?” and “We don’t want any.”

In the end Bingo survives an explosion and wakes up surrounded by all the characters he met throughout the movie (another PEE-WEEesque touch). The good news is that it’s amusing that he’s being treated in a human hospital, the bad news is that it ends on a freeze-frame/iris-in/mugging-at-the-camera joke about Hal saying he’s gonna get neutered.

BINGO opened at #10 at the box office, well below other new releases DOUBLE IMPACT and PURE LUCK, but at least above the John Candy movie DELIRIOUS – and on fewer screens. But it did not make back its $10 million budget at the box office. 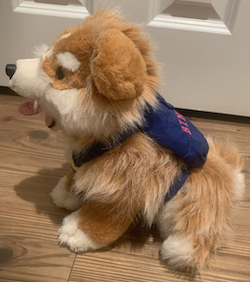 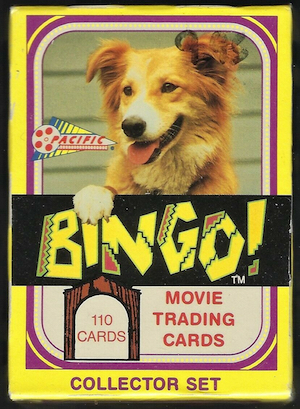 I didn’t realize it at the time, but as a kids movie BINGO did have some merchandising. On ebay you can find tons of the trading cards, a coloring book, a picture book, a junior novelization (by Saddle Club creator Bonnie Bryant under her married name B.B. Hiller), an “illustrated rhyme book” (by screenwriter Jim Strain) and a “rare” plush doll that does kind of look like the dog in the movie and wears a backpack that says BINGO! on it.

According to American Humane (who say that “Bingo will steal your heart away”), Bingo was played by a female border-collie mix named Lace, who was adopted from a shelter. Her stand-in was Maui and her stunt double was Max. They go into detail about how various scenes were done without harming the animals, under the observation of American Humane or British Columbia SPCA.

Hal Hinson of the Washington Post actually raved about BINGO, calling it “a flat-out hoot” and saying that “Jim Strain’s script is wiggy and off-the-wall; he’s the writer equivalent of a knuckle-baller, and his jokes keep breaking off in weird directions. And Robbins directs the film with a straight-faced style — call it the Green Acres touch — as if there were nothing at all unusual about a dog who dials 911 and barks out his message in Morse code.”

But Clifford Terry of the Chicago Tribune said “the movie succeeds neither as a snappy spoof nor as a canine caper,” and Chris Hicks of Deseret News suggested that “The filmmakers here would have been wise to take a look at the recent Disney pictures SHIPWRECKED and WILD HEARTS CAN’T BE BROKEN for examples of how to make movies for young audiences without offensive material.”

From what I can find, critics were not fond of BINGO. Tom Jacobs of The Baltimore Sun derided it under the unconscionably bad headline “‘Bingo’: doggedly dull despite dunning din of kiddie ditty,” saying that Robbins “fails both his potential audiences” of kids and adults and arguing that “Mr. Robbins and writer Jim Strain think that if you simply take a familiar movie scene — say, a courtroom or an operating room — and include a dog as a central character, it automatically becomes hilarious. Wrong.”

I kind of disagree, though. I was one of the small group of weirdos who saw BINGO in the theater and thought it was funny. I was not a little kid, but did not think it was the sincere kids movie it was marketed as – it seemed to me more like a parody of the Benji and Lassie type dog characters who don’t talk but are humanized in that they can rescue children and stuff. Watching BINGO now I appreciate its absurdity, but it’s not as fun because I had remembered most of the funny parts but not all the cheesy shit in between that’s not as distinguishable from a regular not-good kids movie of the era. And Jacobs was right that it’s annoying to hear multiple people sing that “B-I-N-G-O” song throughout the movie. Still, it’s an unusual enough movie that I recommend it to the curious.

A kid says “Cowabunga!” while jumping his bike, Chuckie’s brother reads The Punisher. The mom saying “No more chainsaw videos before bedtime, okay?” may lend some credence to the Entertainment Weekly and LA Times reviews’ suggestion that the hot dog place is some kind of TEXAS CHAIN SAW MASSACRE parody.

Wayne Robson (Bingo’s cellmate Four Eyes, who tries to escape prison with him) later played an escape artist in CUBE. Surely he was cast because of this.

Robert J. Steinmiller Jr. (Chuckie) was later in JACK THE BEAR, RUDY and THE REF, and composed the theme song and other music for EVIL BONG, DOLL GRAVEYARD and I AM NANCY. He is currently filming BOOTYOLOGY.

Since BINGO, Robbins has only directed a Paul McCartney video, but he’s become one of Guillermo del Toro’s trusted collaborators, writing MIMIC, DON’T BE AFRAID OF THE DARK, CRIMSON PEAK and the upcoming PINOCCHIO. He’s also written a few Indian and Brazilian productions.

Screenwriter Strain later had a screen story credit on JUMANJI.

Cindy Williams David Rasche dog movies Glenn Shadix Jim Strain Joe Guzaldo Kurt Fuller Matthew Robbins Richard Gibbs Robert J. Steinmiller Jr. Summer of 1991 Suzie Plakson Wayne Robson
This entry was posted on Tuesday, August 17th, 2021 at 7:04 am and is filed under Comedy/Laffs, Family, Reviews. You can follow any responses to this entry through the RSS 2.0 feed. You can skip to the end and leave a response. Pinging is currently not allowed.