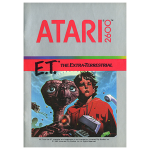 This goes into the Star Trek category where the individual who made it (Steve Spielberg) gets old, forgets everything that made him vital when he was young, and decides to change things, but claims it’s actually perfectionism. The most infamous thing here is that he wanted no guns in the movie at all. Which is kind of weird for a movie where the main characters get chased by a mob of cops. So there they are, a bunch of fuckin cops and government spooks, running around all holding a walkie talkie with their trigger fingers poised to, I don’t know, hit the little beeper button that you use for Morse code.

What they didn’t pussy out on was the language, because there is a bit of cussing from out of babe’s mouths and shit. The famous one is the little boy, Elliot, yells “SHUT UP, PENIS BREATH!” to his brother. Congratulations to Steve Spielberg for leaving that in, although I would have liked him to update it to the more common “COCKSUCKER!” 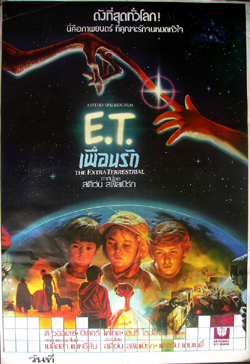 I don’t know what it is about the mentality of these hollywood people that they think something that is already universally loved by parents and children needs to be toned down for their sensibilities. According to my Nerd Issues Correspondent, the same thing was done with the Henry Porter movie. They followed the book very faithfully on a scene by scene basis, but not in its spirit. They removed almost all references to rule breaking and illegalities (like in the book, I guess owning a dragon was a crime, in the movie owning a dragon was really cute). They also took out a joke about a kid being nailed real hard in the face, then cheering for Henry while blood sprays out of his nose.

I mean what are they thinking – ten billion kids read these books obsessively, all parents who are not some kind of christian nut love the books and are so happy to have something to capture the imagination of their little crumb crushers, etc. etc. BUT, we gotta tone it down for the children. Same thing with E.T. The kids all loved it, the parents cried – they’ll never see it again unless we clean it up! I’m surprised they didn’t put pants on the little fucker.

To be honest though all that shit wasn’t that distracting. I never memorized the movie anyway, I probaly wouldn’ta noticed if I hadn’t read about it. But touching up the effects using computers was just a bad idea. The effects in the movie ALREADY LOOKED REAL. When you see the new shit, you see what is obviously computer animation. What’s the difference? It doesn’t look more real, it doesn’t look like it should be there. It’s just a waste of money and time for the haitan refugees they have animating in the ilm sweatshops.

Those were great effects before. The only parts that look phoney are the parts they left in, where E.T. is a midget (or emperor penguin?) in a rubber suit instead of a puppet, and he looks really bloated. All the stuff they changed was the stuff that already looked perfect. Why would you want to take out such great effects just to make something look more modern, and not as good? Would you do that to King Kong, you hollywood fuckwipes?

I got an idea for you little shits. Why don’t you make a special edition of PLAN 9 FROM OUTER SPACE. Use digital technology to fix those little imperfections that they didn’t have the money or technology to avoid. Make it stop switching from day to night randomly, to capture Ed Wood’s true vision from the time. Make the space ships and aliens really spectacular. Clean up the shots of the cemetery, so the tombstones don’t wobble. Create a Final Fantasy style computer double of Bela Lugosi and dig up Mr. Wood’s handwritten notes to piece together the performance he might have given had he not passed away.

Otherwise the E.T. movie is pretty okay. It’s about this little kid that finds a weird alien dude in his yard. He keeps it as his dog and then it drinks beer. Later they have some kind of weird psychical connection, as if they were twins. So the boy kisses Erika Eleniak, and lets the frogs go. Then the government sends a bunch of astronauts to his house, the alien dies and comes back to the life, and ascends to the sky. This story is very similar to the New Testament as well as the end of Michael Jackson’s Moonwalker.

At the end the boy’s dog Harvey almost runs onto the spaceship. I thought that woulda been a pretty good ending.

Also I mean what would happen? Have you ever tried to take a dog on a car ride before? I mean Harvey probaly woulda gone ape shit and started shitting all over the place. And that was not a big spaceship. Can you imagine how far they probaly had to fly? And there’d be this dog shit in there the whole time. Or who knows even if he didn’t shit all over the place, that dog could just start trying to eat the E.T.s or something. I mean they do it to babies sometimes, who knows. I don’t think E.T.s carry laser guns. Jesus this shit is just freakin me out man, some dog takin a big bite out of an E.T., and what the fuck are they gonna do about it? Except keep healing each other, and the dog keeps eating them again and again, all the way back to their planet.

Man now that I think about it those E.T.s really lucked out that the dog didn’t get on the ship.

Anyway what works in this picture is the kids, they are real little but they’re good. Elliot and Gertie act more like real kids than like movie kids. Like when Elliot shows off his toys to E.T., or Gertie says “I don’t like his feet.” Drew Barrymore is really good and she seems almost the same now. Man Drew Barrymore must be pretty young. I’m gonna feel guilty if I think she’s hot next time I watch Charlie’s Angels.

That said there is alot of magical shit that doesn’t make any damn sense. I mean how come E.T. has to run away from guys that are trying to catch him but when he’s trying to impress Elliot he can make bikes fly? It’s ridiculous. I believe in the magic of a young boy’s dream as much as the next guy but jesus, Spielberg, give us a fuckin break.

Also, with the new computer animated chase at the beginning, E.T. hops like a limber bunny, but at the end when he’s gettin back on the ship he still waddles like an elderly penguin. Maybe it’s all that beer and candy he’s been living off of.

But enough of that review bullshit. The real reason I wanted to Write about this movie was to tell you about this dude that was sitting in front of me at the theater. He kept talking to himself, but then would turn around and shush the kids that were whispering in the back. He would clap during any famous scene in the movie. When the music swelled, he started to wave his arms around pretending that he was conducting. Then he calmed down a little for the sad part and I heard him blowing a wad of snot out. I mean he really had an attachment to E.T., but he hated kids. He perked up for the ending, applauded, loudly hummed along and pretended to conduct the orchestra for the entire end credits, with the exception of a small break to put on his jacket. This is the type of dude you usually see on the bus, but apparently they also like E.T.

aliens Dee Wallace-Stone Drew Barrymore Henry Thomas Peter Coyote Steven Spielberg
This entry was posted on Wednesday, October 23rd, 2002 at 11:06 am and is filed under Drama, Family, Reviews, Science Fiction and Space Shit. You can follow any responses to this entry through the RSS 2.0 feed. You can skip to the end and leave a response. Pinging is currently not allowed.

20 Responses to “E.T.: The Extra-Terrestrial”