MIRACLE MILE is a really good and unique movie that would be better if you just saw it not knowing anything about it, which is how I first saw it. So here, let me just give you the quick sales pitch and then you can bail out if you want: Anthony Edwards hears a payphone ringing, decides to answer it, on the other end is a panicked guy apparently calling from a missile silo to warn his dad that a nuclear war has started and he needs to get as far east as he can before we get hit in an hour and a half. It sounds real, so he has to decide what to do with that information, how to escape, who to tell. 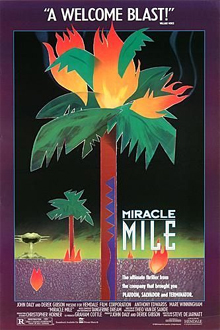 It’s a tense thriller but it first comes up to you like a friend before it slowly tightens its grip on your throat and never lets its fingers slip. Writer/director Steve De Jarnatt (who wrote STRANGE BREW) diabolically begins it as a quirky romantic comedy. Harry is our nerd hero, so he’s played by avenging nerd Edwards. By day he’s a museum guide who likes to dorkily joke around with kids, by early evening he plays trumpet in a big band trying to be “the king of the Glenn Miller impersonators” according to his narration. Then he meets his “dream girl,” Julie, played by Mare Winningham. On their first date they free some lobsters, he meets her grandparents and they have so much fun they plan to meet up again after she gets off her waitressing shift at midnight.

If all had gone as planned they would’ve gone dancing and remained blissfully ignorant of possibly impending nuclear holocaust. They probly would not have gotten laid, if that’s any consolation, because she already scheduled that for the third date. But nothing goes as planned because the power goes out and Harry overnaps and shows up at the diner hours late. He misses the girl but he catches that phone call.

Harry’s first move after hearing about the war is to appeal to everybody in that diner in the middle of the night. At first they think he’s a nut, eventually they hatch an escape plan together. I wonder if De Jarnatt came up with that idea while eating hashbrowns one night, looking around at the other diners and imagining what good they’d be in a pre-apocalyptic scenario. If so he must’ve decided they were mostly useless, ’cause these people don’t offer much. One exception is Landa (Denise Crosby), the mysterious stock broker (or something) with a satellite phone briefcase and connections to verify some of the information and charter a helicopter to the airport. But she’s such an overachiever she already has the waitress and some dude compiling the list of important people to bring to their Antarctican compound. Oprah is mentioned, which was a different joke in 1989 than it would’ve been more recently.

The outlook is good all things considered, but Harry has to split from the group because he’s got to get his girl. I’ve read some internetical commenters who don’t understand why he would risk it all for a girl he just met – but of course he would. The movie really captures the giddiness of a brand new relationship, a super-crush, a first date that turns into non-stop time together. In the long term, if there was a long term, maybe he’d look back and say “Ha ha, I was so into her I thought we had to be together for the end of the world.” But in the million degree heat of the moment she’s all he cares about. He’s not gonna say “Well, I really like her, but I don’t know her that well. I’m gonna leave her behind to die, just to be safe.” Hell, if anything the situation is gonna cause him to make even more rash and emotional decisions than he normally would. So that is not far-fetched that he would go back for her. I have no doubt in my mind that he would do that.

The movie is a series of attempts to get where he needs to go, to find the things he needs (the girl, a ride to the helipad, a helicopter pilot) to get out of the new problems that arise. And the more time passes the more the rumor spreads and more people are in his way. At one point there’s an amazing shot where he’s trying to cross the street but it’s total mayhem. There’s a crazy bike crash right in front of him, cars skidding out, panicked people running around. A little later he climbs up on top of a van and looks out at all the madness. People and cars everywhere, things crashing and blowing up. And he’s in awe because either the world is about to end or he started all this by misunderstanding a phone call.

It’s a great suspense movie because it has the deadliest possible threat hanging over and yet the guy just can’t catch a break. It’s like meeting the girl he likes so much used up all his good luck and now he’s getting it back hard. It reminds me of a stress dream where you’re trying to get to work or something and you’re just going around in circles. I remember the first time I saw this having to yell “Get out of there!” at the TV screen more than once. After a bunch of false starts and set backs he ends up back at the cafe, and the big spinning digital clock rubs it in his and our faces that an hour has passed and he’s in the same damn place where he was when he found out he had to get the hell out of there.

Of course there’s something morbidly ironic about the setting. The poor guy works at the La Brea tar pits and is having a hell of a time getting away from there – looks like humans might go the way of the dinosaurs. The movie actually begins with a video from the museum where he works, an animation that shows the evolution from single-celled organisms to human beings. All that just to be ended by some asshole president we never even see in the movie. “I think it’s the insects’ turn,” Harry says. 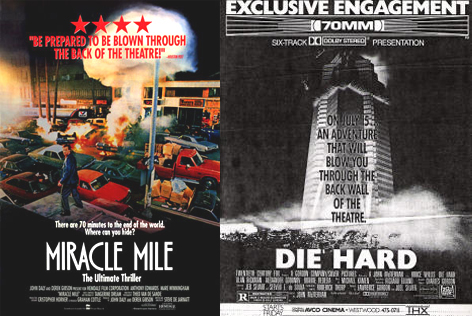 One thing I like is that this makes an incredible time capsule for the end of the ’80s. These days nuclear war seems like kind of an abstract threat. If anything we’re concerned about some fanatics stealing a bomb and setting it off somewhere. That’s a terrifying idea but back then “mutually assured destruction” was pretty much assumed – if one went off then a whole bunch went off, fired back and forth between two sides until everybody’s dead. We would talk about which leaders had “their finger on the button.” TV movies like THE DAY AFTER were advertised as important issue movies that everybody had to have an opinion on. In Seattle people would talk about how we would be one of the first targets because we had the Trident submarines here. So this was very much a movie about a major universal fear of the ’80s.

But alot of ’80s movies pretend like everybody has money dripping out their assholes, they all wear expensive suits and live in penthouse apartments and have big cocaine parties and shit. Not here. Harry lives in a pretty shitty apartment that gets the power shut down by a crazy dude burning shit. His job at the museum is not exactly glamorous. And Julie actually works two jobs – she’s a teacher and a waitress. How often do you see a movie where somebody works two jobs unless it’s making a big deal about how hard it is? Here it’s just a fact of life. But I’m sure if the world doesn’t end the trickle-down economics thing will start working eventually.

Okay, so the end of the world is looming over our heads and we gotta work two jobs, but there are some things we can be excited about – I am speaking of course about fitness. I’m gonna take it as a joke about exercise-crazy L.A. in the ’80s that the gym Harry follows some people into is packed even though it’s about 4:30 am. There’s even an aerobics class in session.

One thing that’s not typical of the ’80s, but is really cool, is that Brian Thompson has a bit part as a gay bodybuilder helicopter pilot. And it’s non-judgmental about him being gay. In fact, he asks “Any problems?” and Harry says “No.”

One thing that is kind of typical of the ’80s and also is really cool is that the score is by Tangerine Dream.

Anyway, as you know if you’ve seen it (IT DOESN’T MATTER THAT THIS END SPOILER IS NOT VERY SPECIFIC, IT’S STILL A HUGE SPOILER) it’s got a pretty dark ending.

And you know what? So much for saving the lives of those lobsters. I doubt they got very far.

Anthony Edwards Brian Thompson Mare Winningham Mykelti Williamson nuclear war Steve De Jarnatt Tangerine Dream
This entry was posted on Wednesday, November 2nd, 2011 at 2:08 am and is filed under Reviews, Thriller. You can follow any responses to this entry through the RSS 2.0 feed. You can skip to the end and leave a response. Pinging is currently not allowed.