500 years later young Raya’s dad Benja (Daniel Dae Kim, HELLBOY), the chief of the Heart tribe, trains her in martial arts and acrobatics to protect the orb. She also has an adorable animal pal called Tuk Tuk (voice of Alan Tudyk I, ROBOT, but don’t worry, he doesn’t talk) who’s like a cross between some furry marsupial and a potato bug – he folds into a ball and rolls around to help her.

All the tribes resent Heart for having the orb, but Chief Benja invites them for a feast to make peace. Raya hangs out with Namaari (Jona Xiao, Halt and Catch Fire), daughter of Chief Virana (Sandra Oh, Craig R. Baxley’s UNDER PRESSURE) of the Fang tribe, and they bond over their interest in dragons, but Namaari turns out to be using her to find where the orb is hidden (not cool) and the visiting tribes storm in and fight over it until it breaks. Each tribe ends up with a piece, which sounds nice and all, but breaking it brings back the fucking Druun, who completely fuck over the world, turning most people, including Raya’s dad, into stone.

Hey thanks for coming over for dinner guys, so glad you could make it! 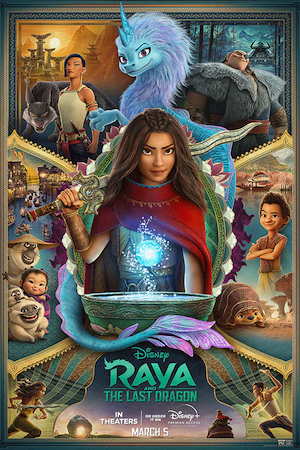 So when the main story starts it’s got the vibe of a post-apocalypse movie. Grown up Raya wears a cool hat like Ogami Itto and roars around the wasteland on a large rolling ball that acts as a motorcycle but is in fact full grown Tuk Tuk. They’ve spent years searching Kumandra for a way to summon Sisu, the legendary dragon who created the orb, hoping she can locate the pieces, fix the orb and save humanity.

When she does meet Sisu, of course, Sisu turns out to be a goofball voiced by Awkwafina (OCEAN’S 8), who always makes me laugh, so I appreciate her comical antics more than some of the other Disney comedy characters. Raya gives Sisu, who looks like a cross between Falcor the Luck Dragon and a My Little Pony, her hat and robe to pass for human during the quest, and later she gains the power to look human. Since she’s never been human before she flops around bizarrely beneath oversized clothes and a mess of hair. Disney’s most unkempt (least kempt?) heroine to date.

It’s a good adventure setup because they travel across the map to each of the geographically and culturally different kingdoms, facing different problems to solve in each. And with each fragment of the orb Sisu gains the power of one of her siblings who helped her create it. The first is the power to glow, which she calls “The Glow,” and that’s the one part in DISNEY’S RAYA AND THE LAST DRAGON that I think might be an intentional reference to the similarly titled BERRY GORDY’S THE LAST DRAGON.

They have to look out for the Druun as well as Namaari (now voiced by Gemma Chan, TRANSFORMERS: THE LAST KNIGHT), who on the negative side is still a jerk, but on the positive side still has cool hair shaved on one side. They make new friends, including an orphan kid named Boun (Izaac Wang, GOOD BOYS), who runs a shrimp restaurant on a boat that they use for transportation (see also SUMMER RENTAL), and a burly Spine warrior named Tong (Benedict Wong, GEMINI MAN). The most pushing-the-weirdness-envelope-for-a-Disney-movie subplot is when they get robbed by a baby who lives on the streets with three monkeys pulling scams. They’re anthropomorphized in the sense that they can run around and plot schemes and stuff, but they don’t talk, and there’s something darkly comic about this little asshole orphan baby who does’t give a fuck.

As much as I would like to see Disney and others bring back 2D/hand drawn animation, the combination of artistry and technical achievement in these things has gotten so mind-boggling that even if the story wasn’t this good I’d be reasonably interested just being able to stare at it. Like with FROZEN II I was marveling at the detail of the clothing, in awe of the fact that these digital characters have costumes designed with different fabric textures, stitches, embroidery, something that I assume they must’ve had to design and physically create and then figure out how to simulate digitally. In this one I also really noticed the hairstyles representing fictional tribal traditions. They’re so elaborate and made more real by little imperfections – in close ups I noticed stray hairs here and there.

And then of course it has that attention to realistic lighting that these movies can have now, including sunbeams and settings lit by flame. And I was wondering if the code crunchers rubbed their hands together for a good challenge or blew a gasket when they were told “Okay, it’s about a dragon with long, fluffy fur who likes to swim.” Was wet fur the last barrier of “shit we just can’t do in computer animation”? Is there anything else left to figure out?

I like seeing Disney apply the things they’re known for (the look of the characters, the animal sidekick, the humor, the production values) to a different type of story. If you don’t like Disney movies at all you won’t like this, but if you want to see a different spin on one, this is a standout. I’m not really a fan of the modern references, whether as jokes or as a short cut to relatability, but at least they’re pretty subdued in this one. The one that bugged me most is Raya describing herself as a “dragon nerd.” I think it bothers me because it’s such a worn out trope even in contemporary stories. “You get it? She’s like us! She’s a fan!”

I know people love the Disney movies that are like Broadway musicals, so more power to them making those, but that’s not my thing so I think having no songs is refreshing. If they had to sing they’d barely have time for martial arts. (That’s one of the reasons I like this so much more than their last animated movie with martial arts, MULAN.)

They must’ve done some mocap, because there’s a stunt coordinator credited: Maggie Macdonald (one of Michelle Rodriguez’s doubles in FURIOUS SEVEN) and also fight consultants – Lauren Mary Kim (mocap for Ahsoka Tano on the Clone Wars episode “The Phantom Apprentice”), Thekla Hutyrova (mocap on ALITA: BATTLE ANGEL) and none other than the star of LADY BLOODFIGHT and FEMALE FIGHT SQUAD, Amy Johnston.

Raya inherits a very cool weapon from her father: a sword with a segmented blade held tight by a cable that then can be loosened to use as a whip. It seems like something out of the DETECTIVE DEE movies. I actually don’t think Disney movies should be about fighting, but who am I fooling, I enjoyed that it was about fighting. And the story is very much about ending such conflicts. While many a sword-free Disney movie solves the problem by throwing the villain off of something, this is the one where the dragon convinces everybody to talk it out and make peace instead of killing each other.

(I guess that could also be said about POCAHONTAS, minus the dragon telling her to do it. I believe she does talk to a tree about it, though.)

The directors are Don Hall (WINNIE THE POOH, BIG HERO 6) and, interestingly, Carlos López Estrada, the director of BLINDSPOTTING; the writers are Qui Nguyen (playwright, choreographer and artistic director of New York City’s Vampire Cowboys Theatre Company, who produce “theatrical events based in stage combat and dark comedy with a comic book edge”) and Adele Lim (CRAZY RICH ASIANS). I think it’s worth noting that the screenwriters are Asian-American, since the ‘90s Disney movies stopped at hiring consultants from the cultures being depicted. This is another little step in the studio’s ongoing evolution, I think. American fantasy movies often depict a magical past based in Europe, but not usually Asia (THE MAN WITH THE IRON FISTS being one exception). The conceit allows them much more leeway to tell the story the way they want than in, say, MULAN or POCAHONTAS, where they were inevitably upsetting people by taking license with their depictions of cultures, stories or historical events. (I did read that there have been criticisms that the cast leans East Asian rather than Southeast Asian).

I don’t think I need to explain to most people here why representation is important, but I want to share something that highlighted that fact for me. When the Pixar movie BRAVE came out I I thought it was fine, but it didn’t make much of an impression on me (it turned out to be about bears, right?). But I went to Disneyland around then and I saw so many little girls with red curly hair wearing their Merida dresses and carrying toy bows, and I saw how exciting it was to those kids just to have an alternative to wearing a Cinderella crown or whatever. 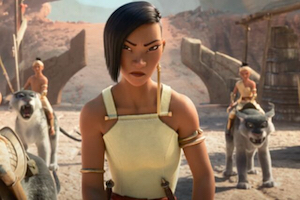 There are obviously many reasons for RAYA to be meaningful with its great, almost entirely Asian-American voice cast and the tribes modeled after several different Southeast Asian nationalities. Chief Benja is a particular type of handsome dude we definitely haven’t seen in American animation, and I think badass Namaari will, uh, awaken feelings in some young women. Or just inspire them because she’s tough and has cool hair.

Even though she’s the antagonist, I was not at all surprised when I saw this tweet about a kid getting her hair cut:

This is my friend’s daughter (posted w /permission) who loved #DisneyRaya & @gemma_chan #Namaari so much!

Now the next step is for the title character to have the asymmetrical tough girl hair. But this is good for now.

P.S. The battle rapper Dumbfoundead does a voice in this, making this his first narrative feature not directed by Joseph Kahn. And apparently Sung Kang is in there. Which character is Dang Hai? Justice for Dang Hai.

P.P.S. This is also historic as the first Disney animated feature to star a known fan of THE BROWN BUNNY.

10 Responses to “Raya and the Last Dragon”