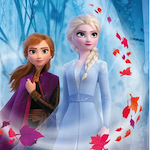 Several years went by, FROZEN’s ubiquity in pop culture (let it go, let it gooooo) sanded off much of its novelty, and much like INCREDIBLES 2 I looked at the posters and it looked like the same movie and even though I thought I should see it I felt no urgency to. Then I finally watched it on Blu-Ray and I got about two minutes before I realized that since I only saw FROZEN once, and have no kids in my life to hear obsessing over it, I had to pause and read the entire Wikipedia entry to remember what the fuck it was about. Like, oh yeah, Elsa (Idina Menzel, UNCUT GEMS) with the snow powers was kind of the bad guy at first. I forgot the main character was actually this non-snowy redhead character Anna (Kristen Bell, POOTIE TANG, SPARTAN, SCREAM 4, HIT & RUN). And I was still going, “Okay, yeah, I sorta remember that” in the last couple paragraphs.

So I don’t know if the people who are actually familiar with the movie disagree, but I think this is a pretty solid way to make a sequel to FROZEN, should you feel the need to do so. The visual palette is conservatively similar, and I prefer weirdly crazy sequels, but this is at least an ambitious one, almost by necessity, because how could they rehash the story? The sisters whose separation was the main topic of the first movie now live together as family. The one previously seen by the kingdom as a villain is now their beloved queen. They kinda had no choice but to create a bunch of new mythology to work with.

(Or not make a sequel, obviously. That was what they did with PINOCCHIO.) 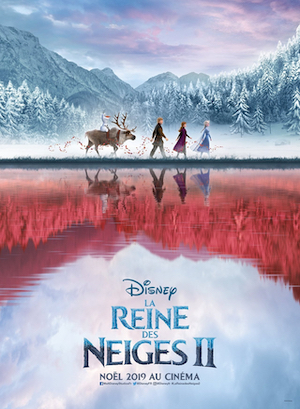 For a minute it seems laughable. There’s an opening childhood flashback where their dad (Alfred Molina [SPECIES, FRIDA] replacing Maurice LaMarche [COOL WORLD]), with little prompting, tells them a long detailed story about something that happened in his childhood, establishing an enchanted forest, an indigenous culture, a character and a mystery that they will remember as adults when they become important. And then their mom (Evan Rachel Wood, BATTLE FOR TERRA, STRANGE MAGIC) throws on her own little aside about a magic river that will also be relevant and remembered. It’s alot to swallow, but I decided to, you know… let it go.

The sisters are happy. The snowman (Josh Gad, MARMADUKE) is magically protected from melting (a running gag about him being excited about maturing after living for more than one season is kinda cute). Anna’s rugged boyfriend Kristoff (Jonathan Groff, AMERICAN SNIPER) is still around (his repeated proposal failures only happen about three more times after I said “I hope this isn’t gonna continue for the whole movie.”)

But Elsa starts hearing a mysterious voice (Norwegian singer AURORA, all caps) singing to her (does she hear the accompanying music too?) and, after some soul searching (a musical number) decides to follow it. But, wouldn’t you fuckin know it, this “unintentionally awakens the elemental spirits” (source: Wikipedia) in her kingdom of Arendelle, causing disasters like all of the water disappearing, the earth moving, etc. until everyone has to abandon their homes. So the trolls (remember, there were trolls) protect the citizens while our main characters use snow magic to travel through the mists to the Enchanted Forest, where it turns out some of their people have been trapped since the time of dad’s bedtime story.

Look, I can’t explain the whole thing, but they learn more about their parents and where the magic ice powers came from. In a very contemporary twist, they learn that the legend is a lie, grandpa (Jeremy Sisto, CLUELESS) actually fucked over the natives, and therefore their kingdom is built on a shameful history. The way they learn about these events is cool, too: a (sentient?) gust of wind mixes with Elsa’s cold powers to create ice sculptures of past events. So they get to walk in and around these temporary echoes of their family and kingdom’s history.

I’m not usually big on musicals, especially this specific style of contemporary Broadway tunes, and this is not an exception. But there are three numbers that are worth mentioning for what they’re talking about or what they show during the scene. One is the song that Kristoff sings to himself in the woods. It doesn’t seem to me to be any cornier than the other ones, but the visual gags during it seem to indicate it’s not to be taken seriously? I laughed pretty hard at a shot where he puts his hand over his ear while walking toward a pinecone and unknowingly strikes the pose of, like, somebody in the “We Are the World” video holding a headphone to their ear as they sing into a hanging microphone. Later in the song images of his reindeer’s face are superimposed behind him, mouthing backup vocals (sung by him, in the voice he uses to speak for the reindeer) in an allusion to the “Bohemian Rhapsody” video. I enjoyed the absurdity, but would’ve liked it to escalate to the point of a guitar or saxophone solo.

More significantly, there are two songs song by Elsa that are a little bit… suggestive? One is I think the main famous song from the movie, “Into the Unknown.” On one level obviously it’s about her being happy with her situation and afraid to risk it by trying something new. But it’s hard not to read more into it. She’s hearing this female voice calling to her, she tries to ignore it, tries to pretend it doesn’t exist. She wonders if it’s “someone out there who’s a little bit like me? Who knows deep down I’m not where I’m meant to be?”

When she says “there’s a part of me that longs to go into the unknown” we all agree what the unknown is that she’s longing to go into, right? Later she sings “Show Yourself” as she travels through what I think is fair to say is a more-vaginal-than-average cave. Lyrics include “Every inch of me is trembling, but not from the cold,” and “Are you the one I’ve been looking for all of my life? Show yourself, I’m ready to learn” and “All my life I’ve been torn, but I’m here for a reason, could it be the reason I was born? I have always been so different…”

Some day there will be more representation in these things, and we’ll get used to it, it won’t be a big deal, and that’s good. But will we kind of miss seeing these wink-wink, nudge-nudge, knowhutimean kind of codes? I think we might.

In between songs, it’s a pretty decent fantasy-adventure story. There’s lots of spectacle to show off the studio’s state of the art computer witchery, particularly the scene from the teaser trailer where Elsa tries to freeze the ocean waves long enough to run across them – which in the movie leads to an encounter with a stallion made of water. An heir to the water tendril in THE ABYSS. As far as the technical stuff, though, I kept being impressed by subtleties. Like, the costumes on these animated characters are incredibly detailed, with very palpable textures to the different materials. I gotta assume they hired a costume designer to make them for real and then re-created them in the computer.

And the lighting in this is stunning! (I feel the same about the HOW TO TRAIN YOUR DRAGON movies, which have Roger Deakins as a visual consultant, but sadly I found the last one boring.) It’s incredible how precisely these artists can mimic specific types of sunlight and atmosphere, and that they know when it can be effective to mute the colors a little. If I was making a cartoon I don’t think I’d know any better than to make everything look like candy at all times. But look how “live action” this cinematography looks:

There are better examples, but those are two typical scenes I was able to find stills of. Maybe it’s just me, but I’m still impressed by this stuff.

If I’m not mistaken, FROZEN II made like a billion dollars or two dollars, and that’s probly a bad thing, because I think the true tradition of Walt Disney is to find different stories and characters to bring life to, not to keep adding new chapters to the book. But, all things being what they are (because what else would they be?), I appreciate that they took their time, applied a high level of artistry to the thing, and expanded a little. I’m wouldn’t want to talk anybody into seeing it who wouldn’t normally see something like this, but if you just hadn’t gotten around to it yet, it’s pretty good.

Alfred Molina Disney Evan Rachel Wood Idina Menzel Josh Gad Kristen Bell
This entry was posted on Friday, February 28th, 2020 at 12:28 pm and is filed under Cartoons and Shit, Reviews. You can follow any responses to this entry through the RSS 2.0 feed. You can skip to the end and leave a response. Pinging is currently not allowed.