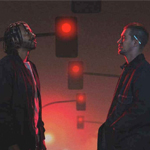 Diggs and Casal play Collin and Miles, best friends and life long Oakland residents. Collin has recently been released after an at-first-not-specified felony. The days left on his probation are used as a countdown and we watch in constant dread of some dumb thing putting him back in. The problem is perfectly illustrated in the early scene where he’s in the back seat of a friend’s car and Miles, riding shotgun, finds an actual gun between the seats and thinks it’s funny to start waving it around. Collin wants no part of it and wants out but it’s a two-seater and they ignore his pleas. He should be furious but he has a bleak sense of humor about it because Miles is as funny and charming as he is a total fuckin dumbass. But he’s kind of the Bishop in JUICE of this movie, the ticking time bomb of bad influence. And I’m sure he would take that as a compliment.

There’s a theme of gentrification. The two are constantly suspicious of “New Oakland” and white tech people and so-called hipsters who have moved there from Portland and elsewhere. There’s a funny-that-turns-disturbing incident where Miles, being white, is mistaken for one of these transplants. He’s much more militant about it than Collin because his identity is so wrapped up in Oakland being tough and him being worthy of it. And Collin is also trying to turn his life around, so he’s much more open to trying vegan burgers and expensive kale juice. 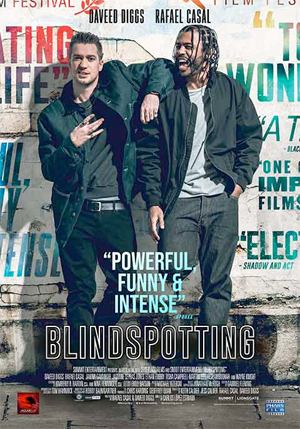 If you ever saw the trailer you know that Collin witnesses a police shooting. Surprisingly, the movie deals with this topic passionately without turning into a heavy melodrama or a thriller about the cops coming after him or any of the things the marketing made me imagine. It’s more like a poetic illustration of the fear and helplessness caused by knowing the system and many of the people in it don’t consider you life to be worth much. Collin’s activist mom (Margo Hall, two episodes of Nash Bridges) makes pamphlets full of safety tips for how to not get shot by cops. Kind of like when you’re camping and you read about what to do if you see a bear. But these are bears that you see pretty much every day if you leave the house.

I mean it’s about that, but overall I’d consider it a comedy. It reminded me a little bit of FRIDAY at times. Funny neighborhood and character stuff leading up to something a little more serious. These are low wage dudes, working for a moving company. Collin is stuck in the daily torture of trying to make a good impression on his ex-girlfriend Val (Janina Gavankar, PEE-WEE’S BIG HOLIDAY) at the front desk. Throughout the movie we piece together more about what got him into trouble and why they’re no longer together.

Collin tries to go on living his life and ignoring what he saw. Stepping forward and saying “I saw that cop shoot that guy, he was unarmed and running away” is just not an option for him right now. So he tries to not make a big deal about it, and masks it with gallows humor. He keeps saying he’s okay.

[STYLISTIC SPOILER] That his pent up feelings about this would eventually explode out in rhyme form was a big, weird surprise to me, but I went with it. I liked it. It makes it kind of like a musical.

But I think more than anything the movie is about this friendship. I heard Casal compare the duo to Calvin and Hobbes in an interview, and I later made the connection that the two had a series of Youtube videos where they re-enact some of those comic strips. But I guess adult Calvin is a more of a problem. Miles has a wife or girlfriend (Jasmine Cephas Jones, Hamilton) and kid (Ziggy Baitinger) who he seems pretty good and loving with, but the truth is he’s a bad person for Collin to be around, at least for the next few days. After all these years as best friends it’s inexcusable for Miles to even consider endangering Collin’s probation the way he keeps doing over and over again. The guy is fun to be around most of the time and I like that they stay friends the whole time, but it’s infuriating when he blows up about how hard it is to be a white person and constantly be having to prove he belongs here. Okay, sure, that does suck. Do you think it sucks as being the black guy who took the fall for the crime you did together, or who is much more likely to be shot by the cops for no reason, or by some other white person who has the wrong idea (which at one point seems like a looming possibility while they’re on the job)? I don’t think it does.

Producers Keith and Jess Calder (ALL THE BOYS LOVE MANDY LANE, BATTLE FOR TERRA, BUNRAKU, YOU’RE NEXT) approached Casal through his Youtube channel and convinced him he could write a movie. But I think Diggs is better known now. I knew his name from the credits of The Get Down but it turns out he’s in the thankless role of the adult version of the main character seen on stage in the intros – dubbed by Nas.  So I guess his more notable role is as one of the original leads in Hamilton (playing Thomas Jefferson and Marquis de Lafayette).

All the press for the movie that I’ve seen has focused on the writer/stars and barely mentioned the director, so I just want to note that rookie feature director Carlos Lopez Estrada did this samurai-themed Thundercat video:

Lopez also directed five videos for a weird Sub Pop rap group called clipping, having collaborated with one member, Jonathan Snipes, in film school. As you can see from this crazy video, Diggs is also in the group, so they’ve been working together for a while.

Though there are only a handful of flashy gimmicks in BLINDSPOTTING, it does make sense that it comes from a music video director. I really like his use of long takes with the camera panning smoothly on tracks. Cinematographer Robby Baumgartner previously shot THE GUEST and BLAIR WITCH (2016). His first feature film credit was as a best boy on the aforementioned JUICE.

I like BLINDSPOTTING’s unusual mix of tones and approaches, showcasing the unique personalities and talents of its writer/stars and their home town. If this is their one time expressing themselves through filmmaking, like Saul Williams in SLAM, I’m glad somebody thought to get them to do it. If it’s the beginning of a new path, I look forward to their next one.

P.S. This is like the third time since October that I’ve seen Ethan Embry (CAN’T HARDLY WAIT) in a movie and didn’t make the connection that it was him. (see also: DEVIL’S CANDY, FIRST MAN). See if you can do better. He’s pretty obvious but I guess you could say he’s in my blind spot.

Daveed Diggs Janina Gavankar Jasmine Cephas Jones Oakland poetry Rafael Casal Tisha Campbell Wayne Knight
This entry was posted on Monday, December 10th, 2018 at 8:07 am and is filed under Comedy/Laffs, Drama, Reviews. You can follow any responses to this entry through the RSS 2.0 feed. You can skip to the end and leave a response. Pinging is currently not allowed.