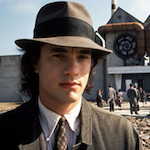 Joe’s office is grey and lit by flourescent lights, soul-deadening despite some German expressionist angles and forced perspective. His desk is tucked away in a room full of pipes and valves, but his asshole boss Mr. Waturi (Dan Hedaya, BLOOD SIMPLE, of course) won’t even let him put a hula-themed lamp on his desk to lighten the mood.

He always feels sick, but no doctor can figure out what’s wrong with him what’s wrong until Dr. Ellison (Robert Stack, a few years into creeping us the fuck out on Unsolved Mysteries) diagnoses him with an incurable “brain cloud” that he says has no symptoms but will kill him in a few months. Joe takes this pretty well and it becomes kind of a wish-fulfillment fantasy as he can finally live his life without fear.

First up: quitting his job and telling off his boss. This impresses co-worker DeDe (Meg Ryan, TOP GUN) enough to go on a date with him, which goes great until he tells her about the terminal diagnosis, and then she bails. (I mean… he’s asking alot.) Oh well, I guess Meg Ryan was just kind of a guest star in this one.

Then a goofball rich CEO guy called Graynamore (Lloyd Bridges, HIGH NOON) shows up at his house. He has one of those typical rich guy problems: his superconductors require a rare mineral found on a tiny island where he needs permission from the natives to mine. Anyway, long story short, he’ll give Joe all the money he needs to live it up for the next couple weeks if he’ll fly to this island and throw himself in a volcano for the hundred year sacrifice to the fire gods. Sure, why not?

It seems like Joe has spent so much time being crushed by his shitty job that he hasn’t put any thought into what he wants now that he’s free of it. But he has this money so he gets driven around in a limo to buy clothes and luggage for the trip. His chauffeur Marshall (Ossie Davis, following up a run of AVENGING ANGEL, SCHOOL DAZE and DO THE RIGHT THING) seems suspicious and annoyed when Joe asks him which department store to go to. His objection turns out to be philosophical.

“Clothes make the man. I believe that,” he says. “You say to me you want to go shopping, you want to buy clothes, but you don’t know what kind. You leave that hanging in the air, like I’m going to fill in the blank. That to me is like asking me who you are, and I don’t know who you are, I don’t want to know. It’s taken me my whole life to find out who I am, and I’m tired now, you hear what I’m saying?”

Of course it should be noted that the wise old Black man can be a condescending trope, especially when he’s working in somewhat of a servant role, but Davis pretty much steals the movie for a while, and in my opinion maintains his dignity when he ends trying on tuxedos with Joe but asserts his preference to return to his family for dinner instead of become Joe’s buddy for hire or something.

Joe also buys luggage from a salesman (Barry McGovern, BRAVEHEART) who takes the job very seriously and sells him huge waterproof trunks that will be important throughout the movie. And he gets a haircut (from Carol Kane in a brief, pseudonymously credited cameo). I usually don’t feel this way, but I liked him better with the mullet.

He flies to L.A. to begin the boat trip to Waponi Woo, and is met by Graynamore’s daughter Angelica (hold the phone, it’s Meg Ryan, AMITYVILLE 3-D), who I think is the funniest character in the movie. Ryan’s DeDe already seemed like a rare instance of her doing a comical shtick, but Angelica is a more extreme one with a funny voice and weird conversations sometimes involving her recitation of her poetry. When she hands him off to her half sister Patricia (Meg Ryan, “Megan Harper,” two episodes of Charles in Charge), who will captain the yacht for the actual journey (with help from Amanda Plummer, MIMIC 3: SENTINEL), I was a little disappointed to realize the one he was gonna fall for was just the normal Meg Ryan persona. I don’t know, I realize Angelica is kind of an idiot, but she’s fun. I like her. Maybe you should give her a chance, Joe.

Patricia is a normal human, hates her dad, is troubled by her privilege and trying to make it without her family’s money, and at first doesn’t like Joe but is won over, so in that sense it becomes more like a standard rom-com. But I don’t think YOU’VE GOT MAIL has them get in a shipwreck and barely survive a harrowing ordeal adrift on a raft made of luggage. I’ve still somehow never seen CASTAWAY, so this part reminded me of CABIN BOY, which upped the ante by having its protagonist hallucinate a talking cupcake puppet that spits tobacco on him. But obviously it wouldn’t be fair to expect every movie to reach those heights.

They do make it to the island and I think we can all admit that the Waponis are, at best, a condescending portrait of a fictional Pacific Islander indigenous culture. They wear facepaint and clothing made of leaves and feathers like some Amazon tribe, but their chief is played by Abe Vigoda (THE STUFF) and another more show-offy character is played by Nathan Lane (TITAN A.E.). I didn’t spot him, but apparently Branscombe Richmond is also there, uncredited. This guy, in about three years he managed to show up in this, LICENCE TO KILL, CAGE, HARD TO KILL, THE PERFECT WEAPON, SHOWDOWN IN LITTLE TOKYO, HARLEY DAVIDSON AND THE MARLBORO MAN, THE TAKING OF BEVERLY HILLS, CURLY SUE, GRAND CANYON and many other movies and TV shows. That’s a prolific period right there. Getting alot of work in to prepare him for 1992, when he would portray “Terrifying Clown #1” in BATMAN RETURNS and “Rapist” in ACES: IRON EAGLE III.

In the end when SPOILER they realize that Joe’s been taking medical advice from a phony and is not in fact close to death, it honestly seemed to me like a really sad ending for a minute there. The idea is that now he’s in love and no longer shackled to his shitty job that made him unhappy, and he gets to keep on living and it’s great. But first I thought oh no, if he’s not dying, he can’t live so care free anymore. The magic will be gone. The spell will be lifted. Maybe you need a plan of throwing yourself in volcano for corporate America if you want to really live. I hope not.

Some of the people behind the scenes are interesting. It’s shot by Stephen Goldblatt, the d.p. of THE COTTON CLUB, LETHAL WEAPON and, uh, BATMAN FOREVER and BATMAN & ROBIN. And there are some people who would work on a bunch of Tim Burton movies: production designer Bo Welch, art director Tom Duffield, costume designer Colleen Atwood, set designer Rick Heinrichs. That makes sense because, although I don’t think it’s on the level of Burton’s best, it comes from that same admirable belief that visual style, production value and a strongly controlled tone are allowed in a comedy.

I assumed JOE’s years of bad reputation was the result of poor box office, but it didn’t do that bad – made more than it cost, at least. It opened against HOUSE PARTY and made more money (but on a way bigger budget, obviously). It hung around near the top of the charts for a few weeks but when TEENAGE MUTANT NINJA TURTLES came out it pretty much was nunchakad and pizzad out of existence.

Maybe it’s because, like KING KONG VS. GODZILLA and FREDDY VS. JASON, the ending is a little ambiguous about whether Joe or the volcano technically wins. I’m sure volcano fans were disappointed at the time, but fuck ‘em. Maybe if I knew more about lava I would have more nitpicks, but this is definitely a movie with its own tone and vibe and ideas about how to stay positive in a world of unrelenting shittiness, and that’s a good thing to have in this world.

Writer/director John Patrick Shanley started as a playwright, then had quick success as a screenwriter, considering he won the best original screenplay Oscar for his second movie, MOONSTRUCK. This came three years later, and did not exactly kick off a prolific directorial career. He continued to write for the stage and screen (most notably ALIVE and CONGO) but his big comeback wasn’t until 2005 when his play Doubt: A Parable won four Tony awards and a Pulitzer. In 2008 he finally returned to directing with the Oscar-nominated adaptation of the play starring Meryl Streep, Philip Seymour Hoffman, Amy Adams and Viola Davis. Recently he shot a new one called WILD MOUNTAIN THYME, which will be only his third movie as a director.

Amanda Plummer Carol Kane Dan Hedaya John Patrick Shanley Lloyd Bridges Meg Ryan Ossie Davis
This entry was posted on Wednesday, December 9th, 2020 at 2:50 pm and is filed under Comedy/Laffs, Reviews, Romance. You can follow any responses to this entry through the RSS 2.0 feed. You can skip to the end and leave a response. Pinging is currently not allowed.

15 Responses to “Joe Versus the Volcano”