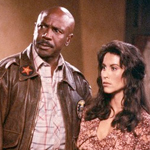 They convince their boss, (Fred Dalton Thompson, DIE HARD 2) to let them soup up their air show planes even though he says they’re “priceless antiques” – he seems less concerned that the pilots are too – and they fly into action.

The first IRON EAGLE immediately got in my good graces by using a stencil font for the opening credits. ACES does it by putting flags next to the names of the stars. Representing England is Christopher Cazenove (ZULU DAWN) as Palmer; from Japan we have none other than Sonny god damn Chiba as “Sue” Horikoshi; and for Germany we have the James Dean of Germany, Horst Buchholz (MAGNIFICENT SEVEN) as Leichmann. I felt bad for him because he’s a good guy, and his biggest obsession throughout the movie is proving that just because he’s German doesn’t mean he’s a Nazi, yet they put a swastika next to his name! 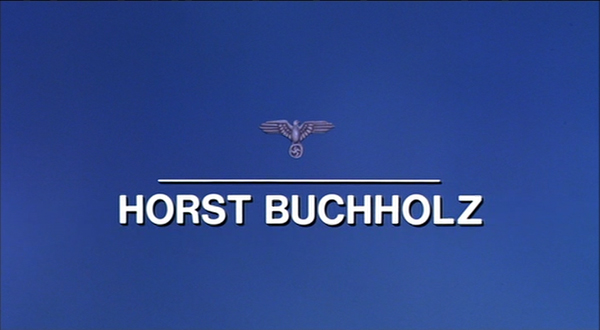 I can understand the iron cross next to Paul Freeman (RAIDERS OF THE LOST ARK), though because he plays the snide German mercenary Gustav Kleiss. That guy does have a Nazi past, which we know because of the scene where he stands and admires all the photos of his Nazi past collected on the wall in a church he took over. He’s conspiring with an American traitor (Rob Estes, PHANTOM OF THE MALL: ERIC’S REVENGE) to smuggle cocaine on U.S. military fuel shipments to fund hate groups. He also kidnaps a Peruvian mayor (David Herrera) and his daughter Anna (first ever Ms. Olympia Rachel McLish, PUMPING IRON II: THE WOMEN, RAVENHAWK). And the mayor’s son/Anna’s brother/Chappy’s old friend, a potential whistleblower, is killed while flying one of the shipments.

When they came to tell Chappy that Ramon Morales had crashed in the Gulf, I thought for a second it was following the previously established pattern of the series and this was the hero or at least a side character from the last one. But no, as far as I can tell it’s some other guy Chappy knows from his off camera adventures. I feel bad for the guy too because when they have his funeral later it’s only attended by his aunt, sister, and Chappy, padded out by the three Aces and another guy they just met.

Anna is the highlight of the movie because McLish, though clearly inexperienced as an actress, adds a great physical presence. Admittedly she never tops her entrance – chained to the rafters, she lifts herself above the ground, turns upside down, hangs from her legs, unhooks the chains, chokes a couple guards with them, and breaks them by laying them on the tracks just as a train goes by – but damned if that isn’t the coolest sequence in any IRON EAGLE. 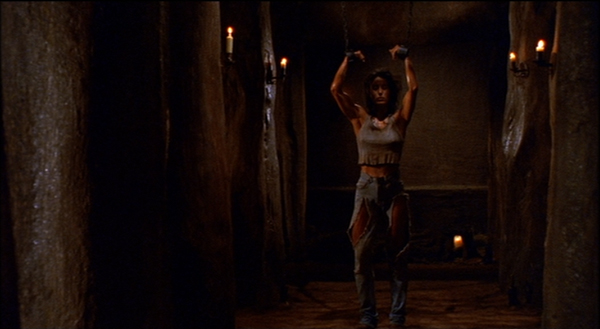 She stows away to the states and trusts no one, but eventually teams with Chappy and a random comic relief guy named Tee Vee (Phill Lewis, HEATHERS) after he helps rescue her from a biker gang (?) trying to gang rape her (?) when she stumbles into the wrong apartment in the Dallas projects. 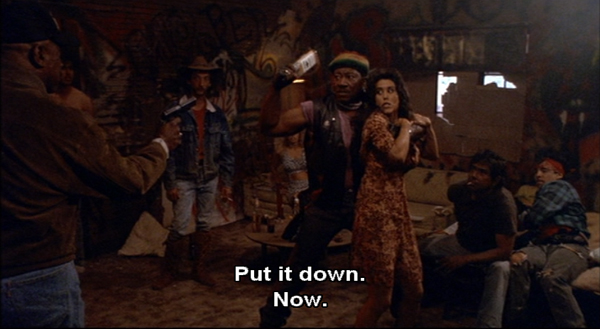 It’s kind of funny to have the coolest character in an IRON EAGLE be the one who’s not a pilot. Instead she does a bunch of running around, fighting and firing machine guns, which honestly is more interesting. I wish there were a few more feats of strength, but that’s okay. Interestingly she alternates between guns-out and nice-dress looks – well, and this one that combines both: 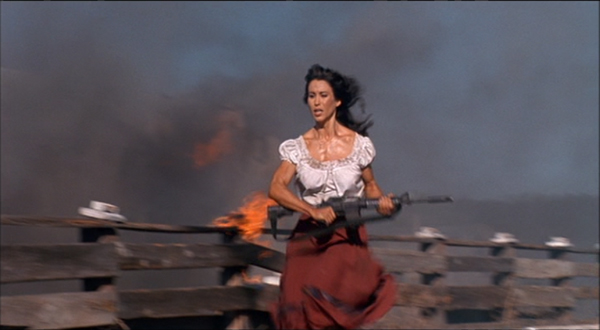 – and nobody ever comments on her strength or physique. I can’t decide for sure if that’s progressive, but I lean yes. It must’ve been so hard to keep Tee Vee from riffing on her muscles. The closest anyone comes to acknowledging her uniqueness is when Chappy is flipping through the late Ramon Morales’ wallet photos to explain to military intelligence who’s pictured in them and he says “She went to UCLA on an athletic scholarship.”

Also, I thought it was funny that he had to explain this photo was taken on graduation day: 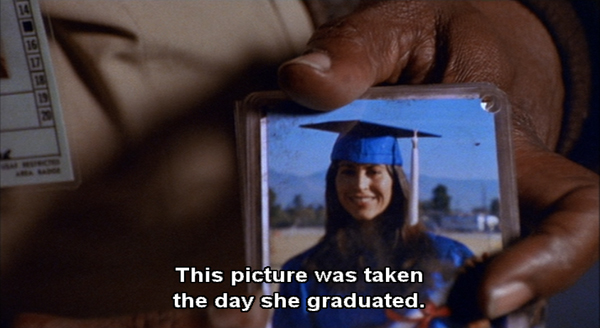 The kind of insights you could only really get from someone really close to the family.

I should mention that this air show is a pretty big deal, because afterwards they have an after party and this really is En Vogue performing at it! I didn’t realize it until I had the subtitles turned on. 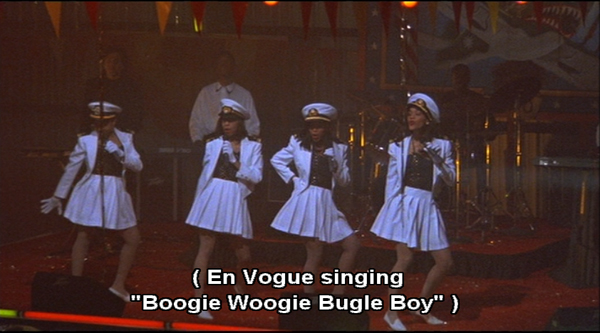 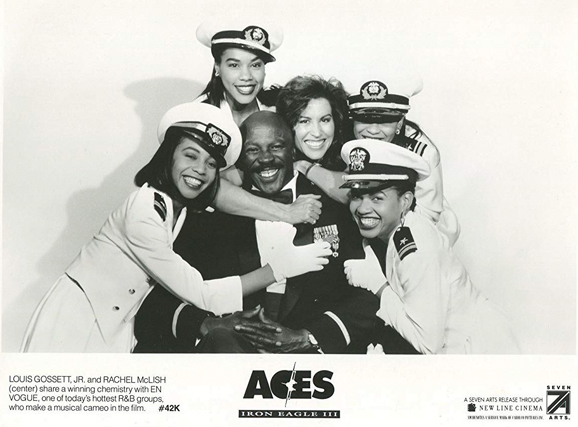 Apparently Ray “Boom Boom” Mancini is in the movie somewhere too, but I didn’t catch who he was playing. He should’ve been on the side of the stage shadowboxing.

Unfortunately, ACES has the most demeaning cultural stereotypes of the series. Sue talks so much about being honored that they treat it like his catch phrase. When he confesses that he’s lied about his history he says he’s dishonorable. Chappy jokes with him “Don’t commit harakiri” after a loss, and later he chooses to heroically kamikaze himself. Not cool. 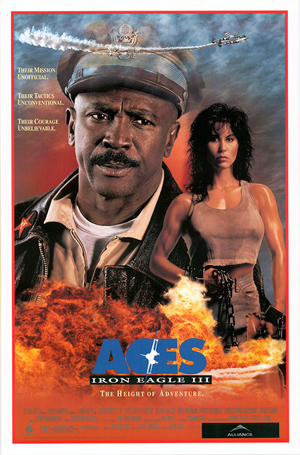 Obviously Gossett is shown great respect throughout the series, and other than his love of dancing to soul music, he doesn’t really fit racial assumptions. In this one he’s into wearing a cowboy hat and barbecuing on his ranch. When he has to go into the projects he borrows a Raiders hat, as if he needs that extra signifier to fit in. (To be fair this neighborhood seems to be multi-cultural. We know it’s bad because of the graffiti and the crowds of hookers that approach anyone who drives up.)

It’s also hard for me to get behind Tee Vee. While obviously Gossett is shown great respect throughout the series, this era really popularized the stereotype of the “homeboy,” particularly this type who is supposed to be funny because he mentions things from popular culture (rap, MTV, 2 Live Crew, Stallone), sometimes to people who he should know don’t know what he’s talking about, such as a little girl in Peru who doesn’t speak English.

More often than not I get the sense what he’s saying is supposed to be funny while not understanding why it would be funny (quoting the National Enquirer slogan “inquiring minds want to know”) or don’t even know what it’s supposed to mean (“This ain’t Pee-wee’s Playhouse“). Also he repeatedly calls Anna baby.

They sort of have it both ways, making all kinds of humor about him being a scaredy cat, but also about him being hard because he Grew Up On The Streets or whatever. Chappy and the whole crew reluctantly accept his offer to go dump the body of an attacker killed in her aunt’s apartment. Just something they know how to do around here.

One way you know this was made in the early ’90s: Tee Vee wears an Africa medallion. I noticed in one part that he was gone briefly and when he came back he had changed to a different Africa medallion. 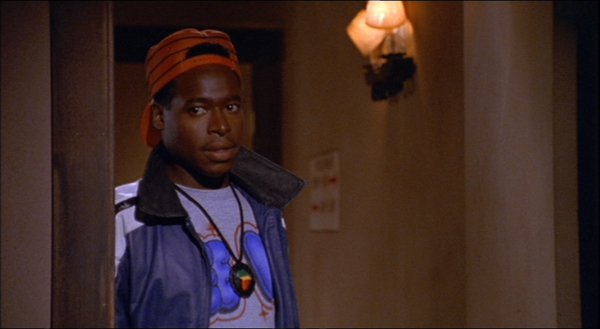 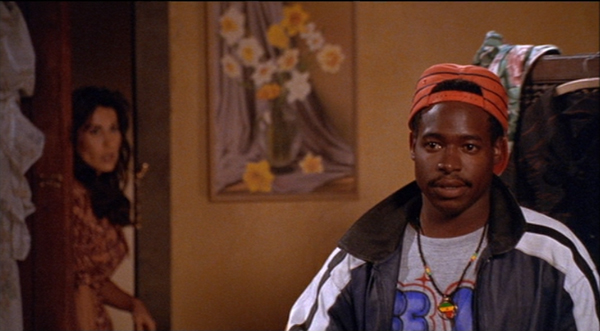 Maybe the first one was chafing his neck or something.

If you’ve seen it, did you catch this part? I mentioned the part where Kleiss is reminiscing about his old Third Reich days: 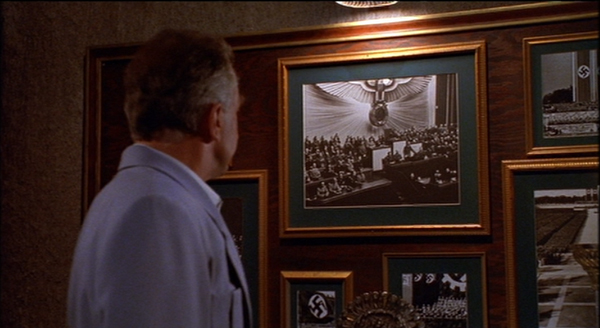 Much later after they’ve blown up the church their fleeing vehicle runs over those pictures. 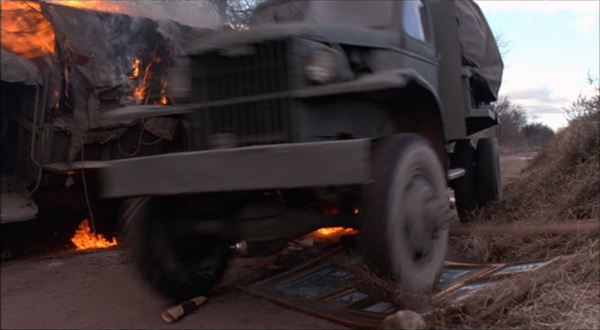 They probly didn’t sell it as clearly as they meant to, so it comes off as kind of a subtle touch. Also, the audience is kind of hyped up at this point because we’ve just seen the church bell fly off and land on the asshole that detonated the bomb.

Here’s a scene where all seven of the good guy characters are standing in one small apartment together. Not all movies do that. This one does. 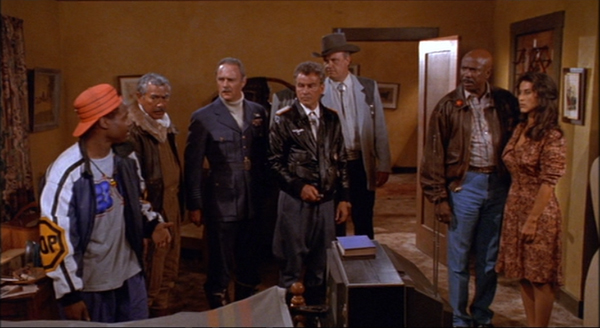 But for most people IRON EAGLE movies are not about seven people standing in a small room together talking about disposing of corpses. They’re more about jet planes doing jet plane shit. And in the first two they did it the same way with second unit flight footage, blue screen cockpits and the same stock footage of machine guns firing. This one is cool because it uses more model shots, giving it a more artificial look that I enjoy. And the plane action is much more preposterous. There’s a great scene where Palmer messes with a bad guy pilot in a really funny way but it causes his plane to flip upside down and he hangs upside down from it until Chappy comes over and pushes his wing against Palmer’s wing to flip it back over. And it works!

For that I have to credit the new director, John Glen – not the astronaut, but the director of all the ’80s 007 movies. He was also editor and second unit director on ON HER MAJESTY’S SECRET SERVICE, THE SPY WHO LOVED ME and MOONRAKER, so his Bond background is extensive. John Richardson, credited as “models and special effects creator” according to IMDb had also worked on Glen’s Bond movies, and continued doing miniatures for TOMORROW NEVER DIES, THE WORLD IS NOT ENOUGH and DIE ANOTHER DAY. He was also special effects supervisor for ALIENS, WILLOW, STARSHIP TROOPERS, and all of the Harry Potter movies.

This is the only IRON EAGLE not directed by Sidney J. Furie, who, along with Kevin Alyn Elders, did provide the screenplay again.

Christopher Cazenove En Vogue Fred Dalton Thompson Horst Buchholz Louis Gossett Jr. Paul Freeman Rachel McLish Ray "Boom Boom" Mancini Rob Estes Sonny Chiba
This entry was posted on Tuesday, March 5th, 2019 at 11:29 am and is filed under Action, Reviews. You can follow any responses to this entry through the RSS 2.0 feed. You can skip to the end and leave a response. Pinging is currently not allowed.