I was sort of dreading THE TERMINAL, because I’d heard only bad things, and because I was pretty sure it wouldn’t stand up to SCHINDLER, AMISTAD and PRIVATE RYAN all in a row. Well, it’s not something a consider a good movie. It’s a hacky comedy script that squeezes cute bullshit out of a great real life premise.

Tom Hanks plays Victor, who arrives at JFK International Airport in New York from a fictional former Soviet republic just as a coup has happened back home. Because his country no longer exists he’s stuck in a customs limbo – he can’t go back home, but he can’t go into the city either, so the customs guy in charge (Stanley Tucci) tells him he’ll have to wait in the International Something Something Lounge, that food court/mall type part of the airport, until things are straightened out tomorrow or so. It ends up being longer. 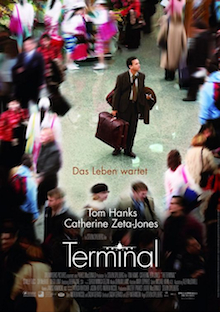 But optimistic Victor – who adorably doesn’t understand anything they say and keeps shaking their hands and thanking them – does what he’s told. Next thing you know he’s living in the airport for months, surviving off of saltines and mustard, cleaning himself with the restroom sink. It’s all played for smiles, so it’s not a harrowing tale of survival. The terminal is treated as a fantasy world where he can make friends, get a job, teach himself English, bring people together and fall in love with Catherine Zeta Jones without ever being hassled by security for living there. Or for remodeling the place. (Looks like he was some kind of carpenter or something back home.) And nobody ever tries to, like, get him help straightening out this situation.

So tonally it’s alot different from EMPIRE OF THE SUN, but I definitely noticed some parallels. He’s an innocent man with a complex citizenship, a war traps him in a place where he must learn to survive, a makeshift micro-civilization. He makes allegiances, plays poker, finds a way to get food, stares out at the border, tempted to make a run for it, the authorities waiting to pounce on him if he does. He’s even surrounded by airplanes, right? But isn’t excited about them. No “Cadillac of the sky!”

Remember how Jamie in EMPIRE OF THE SUN carried around a box with his important items in it? For Victor it’s a peanut tin. It has a whole backstory to it that’s kind of sweet but also kind of fill-in-the-blanks what-quirky-thing-could-this-guy-care-about screenwritery.

Hanks is good, and it’s nice to see him trying something closer to a straight comedy at this late date. He hasn’t done too many of those since he got into Oscar collecting. But it’s weird seeing regular-Tom-Hanks with that accent. It’s just such a familiar All-American face, it’s hard to accept him as foreign without some kind of different look. Maybe they shoulda gave him a Borat mustache.

Spielberg also acquits himself well on a technical level. It’s all filmed on what I guess is a huge set, and he manages to keep it visually energetic in that confined space. I don’t know what the real lounge looks like, but I hope there’s a Cinnabon. If this ever happened to me I would use that sugar goo to survive. On the set at least there is a very prominent Borders store. That chain is out of business now but it’s cool that it existed then, because get it, borders?

Anyway it doesn’t feel as claustrophobic as you’d think it would. He makes something more coherent out of it than HOOK. But he shouldn’t have used this script in my opinion. That’s the problem. It’s okay that it’s fantasy, but it should be more plausible fantasy. What happened to the real guy? Must not’ve been much since they made up all this bullshit for the movie version.

(okay, I looked it up, the real guy was an Iranian who lived in a French airport for 17 years after getting his passport stolen. Doesn’t say anything about Catherine Zeta-Jones.)

The weirdest part is the two romances. Okay, so he keeps running into Zeta Jones ’cause she’s a flight attendant, and she’s having problems with men, I’m willing to buy that she sees something in him. Fine. But is a guy in that situation really not gonna explain it to her? And when she finds out he lives in the airport and she calls him a liar why can’t he explain it then? Look lady, my country no longer exists! I don’t know if my family is alive. I’m living off saltines in a god damn food court, sleeping on plastic chairs, bathing in a public restroom sink, ’cause your government can’t get their shit together. And you’re gonna yell at me?

It started to infuriate me. He’s just a foreigner, not a Forrest Gump. Isn’t he? I don’t understand why he can’t behave like a grown adult.

It’s also got that dreaded lazy screenwriting approach of giving each character one quirk that’s supposed to make them interesting. Jones is interested in Napoleon, so every time they meet they gotta compare something to some fact about Napoleon. Diego Luna’s character finds out that Zoe Saldana’s character is a Trekkie (weird coindcidence, huh?) so that little non-detailed-factoid is the key to her heart. No, not wooing her with an elaborate Klingon mating ritual, just telling her he also likes Star Trek. It’s a love connection! She’s apparently never met anybody else interested in that obscure thing that almost nobody has ever heard of, so it’s impressive to her.

Of all the ridiculous things that happen in this I might’ve had the most problem with their romance. He’s her secret admirer. Their interaction is just that he gets Victor to ask her questions. Then he gives her a ring and she says yes! I think I’m supposed to get swept up in the joy of the spontaneous airport wedding, but I was still wondering what her problem was, marrying a complete stranger just ’cause he spied on her from the janitorial department. I’m concerned about both of these people.

Maybe all this would be more acceptable if grounded in reality by a plausible conflict. Tucci is good at playing a prick, but I never believed this particular prick. He’s an asshole from the very beginning, almost proud to explain to Victor that his homeland is at war and his trip is cancelled and he’s a prisoner. And if it really bothers him so much to have Victor there I can’t believe there’s not somebody he can call or fax or bring in that can do something. Even an asshole would try to move the process along just to get him out of his hair. Especially an asshole. He would be calling up everybody he knows chewing them out, wouldn’t he?

The story is credited to Andrew Niccol (THE TRUMAN SHOW) and Sacha Gervasi (director of ANVIL! THE STORY OF ANVIL), the screenplay to Gervasi and Jeff Nathanson. Nathanson also wrote CATCH ME IF YOU CAN and KINGDOM OF THE CRYSTAL SKULL for Spielberg, but I recognize his name from watching the RUSH HOUR movies. He did parts 2 and 3, as well as SPEED 2. I mean look, I don’t know who to blame, but as much as Chris Tucker makes me laugh in the RUSH HOURs I do feel like the scripts got some pretty hackneyed jokes and cliches in them. They might be the work of the type of writer who would make it a major plot point that a character is a “Trekkie,” because they saw on TV that that is a thing that there is, and then they don’t go any deeper than that to make it seem like a real person or like they have met a real person before.

Shit, it’s even worse than the reference humor that’s so prevalent now. At least the reference humor is by people that might know what they’re talking about. This is dumb people reference humor, for people who’s idea of references is, like, New Jersey is stinky, Sean Penn punches photographers, Ronald Reagan says “well” alot. I guess it goes well with the other corny shtick like crashing into windows, going into the women’s restroom on accident and all that. (because he’s foreign)

The most impressive thing about THE TERMINAL is that Spielberg doesn’t have too many duds like this. But I think I liked it better than HOOK.

Catherine Zeta-Jones Chi McBride Diego Luna Stanley Tucci Steven Spielberg Tom Hanks Zoe Saldana
This entry was posted on Wednesday, February 1st, 2012 at 1:45 pm and is filed under Comedy/Laffs, Reviews. You can follow any responses to this entry through the RSS 2.0 feed. You can skip to the end and leave a response. Pinging is currently not allowed.

42 Responses to “The Terminal”