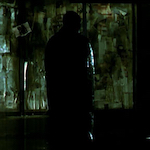 This one is written and directed by J.T. Petty, whose THE BURROWERS I’ve been meaning to check out forever. He also did SOFT FOR DIGGING (a $5,000 student feature that I believe got him this gig), S&MANand HELLBENDERS. Here he’s made a movie that kind of feels like it comes out of the same school as early Soderbergh or Nolan – the hyper-intelligent indie guys that were more into old noirs than drive-in movies.

Marvin Montrose (Karl Geary, who was in the Michael Almereyda movies NADJA, TRANCE, HAMLET, HAPPY HERE AND NOW, EXPERIMENTER and TESLA) is a young man who was one of the survivors of Strickler’s Disease. He lives with his loopy mom Simone (Amanda Plummer, KEN PARK) and cool druggie sister Rosy (Alexis Dziena, BROKEN FLOWERS), who are both very protective of him and his fragile immune system. 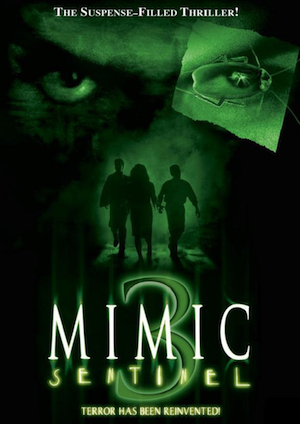 He’s asthmatic and allergic to everything, so his room is sealed off with plastic, but he can put a cloth over his mouth and go outside for a little bit, as when Rosy insists he come see a sewer where she thought she saw a dead body. His camera flash reveals the corpse, which could be a reference to MIMIC 2, but obviously reminds me of the opening credits of THE TEXAS CHAIN SAW MASSACRE.

Mostly though he stays inside and watches the street and the neighbors’ windows, obsessively documenting their lives in photos that he tapes to his wall in a massive collage/file of all the neighborhood characters. He doesn’t know most of them, so he writes nicknames on them.

He’s particularly curious about a guy in a knit cap moving bags around across the street, who he calls “Garbageman.” Since we only see Garbagemen from a distance at first I didn’t realize it was Lance Henriksen (DAMIEN: OMEN II, PIRANHA II: THE SPAWNING, ALIEN 3, NO CONTEST II, SCREAM 3, THE MANGLER 2). Marvin also watches the less mysterious, more attractive Carmen (Rebecca Mader, THE MEN WHO STARE AT GOATS), whose name he learns when Rosy embarasses/helps him by bringing her into his room and showing her the photos. The whole thing is as awkward as she is nice, because not only does he have to acknowledge to a stranger that he’s been watching and photographing her through her window, but she has to leave after the smell of cigarettes on her makes him choke. The next time he sees her it’s awkward again, but a positive sign: that time he chokes on the smell of the perfume she put on before coming over.

The most unexpected thing about the MIMIC mythos in this one is that Marvin goes to a book to look up the Judas Breed, and there’s a picture of it and everything! Everybody knows! But they don’t know it’s one of those that has been causing people in the neighborhood to disappear. When Marvin sees something happen to Rosy’s boyfriend Desmond (Keith Robinson, Power Rangers Lightspeed Rescue, GET ON UP) he calls the police, but Detective Gary Dumars (John Kapelos, WEIRD SCIENCE, THE SHADOW, THE SHAPE OF WATER – IMDb trivia claims that ”martial arts actor Gary Daniels was up for the role”) comes to talk to him and has a history with him that makes him think he’s imagining it.

One really weird touch, in a good way, is that Simone immediately seems smitten with the detective, and pretty soon he’s always coming over to hang out with her. Like, not only do the cops call you a liar, but they become your stepdad.

I like when a premise fits so perfectly with a low budget. Yes, they’re saving money by setting the entire movie in a couple of apartments on one block, but also seeing the characters deal with the situation within those constraints is what’s fun about it. It’s cool that he’s limited to his viewpoint from his room and that he has to send Rosy and Carmen to get photos for him and sneak into the Garbageman’s apartment and warn them from the across the street about what he sees through the windows. It would be weakened, not improved, by having a larger scope.

And I like how it’s both the smallest and biggest MIMIC story. (SPOILER) I thought (as I’m sure you’re supposed to) that Garbageman was an evolved Judas Breed, but actually he’s part of a group of conspirators enacting a doomsday plan because they’ve discovered there are tons of eggs under the city and it’s too late to stop an army of mimics from fucking up the human race. Straight up mimic-pocalypse going down at the end. “This is not a city, it’s a god damn killing jar,” he says.

I’m curious about this one giving a credit to Donald A. Wollheim for his short story, not just for “based on characters by” or anything like that. I wonder if there’s something specific based on the story that wasn’t in the first movie, or if perhaps it might as well be said to be based on it if the first one was, because both of them are equally loosely based on it? I don’t know, I couldn’t find a book with the story in it. But it is a movie that’s compact enough to feel like it could be a short story, and that’s a compliment.

This will be my last review before Thanksgiving of 2020, a year that has sometimes made it hard to find things to be thankful for. I’m not a religious person, but let me give you a little sermon in the tradition of the pastor of the Presbyterian church my parents took me to, who would often find allegories in Peanuts comic strips.

I think we can take inspiration in the MIMIC trilogy. We can look at the Judas Breed – a godless abomination, created as a public health tool for humans, destined merely to kill roaches and then die off. But it managed to not only defy its prognosis, but evolve into something amazing and unprecedented, something that evolves to survive among humans, then perhaps even replaces them? We can also look at the human characters, regular city dwellers who manage to survive these fucked up circumstances they never could’ve predicted, despite the frequent failure or abuses of government agencies. They too learn from their mistakes, improve their circumstances, fall in love, move on. Maybe they have to smear their wounds in bug slime or cut a bug man who looks like their friend’s head off or leave their bedroom and make a bomb out of a refrigerator, but they will make it.

We could look at the examples of either of them as illustrations of how we can do it too. No matter how dark it is, no matter how hopeless it looks, no matter how far down the sewer we have to crawl, we will eventually climb out. I like both of those analogies, but I see myself as one o’ them artistes, so rather than the characters of the MIMIC trilogy I choose to find hope in the very existence of the MIMIC trilogy. I’m gonna look at the series itself, something that was maybe a mistake (Guillermo Del Toro coming to Hollywood, trusting the wrong people, turning an anthology story into a feature), that was made with a genuine monster of Hollywood, created through struggle and compromise and regret, and yet somehow spawned these cheap sequels that could’ve just been nothing, that were guaranteed to seem disreputable, that maybe will never really be widely appreciated, and yet here they are, and they spoke to me in different ways, individual voices climbing through the maze of crass commercialism. Humanity shining through the muck.

So I can be thankful even in a year where a pandemic (having occurred at a time when the actual dumbest motherfucker on the planet is in charge) has stolen normal life away from us, locking us in our apartments like poor Marvin. I can’t believe it’s been, what – 8 or 9 months since I’ve seen many of my friends, or stepped in a movie theater? I had to cancel a long-anticipated trip to Disneyland with my nephews, couldn’t do my Video Store Day DJ set, couldn’t go on a trip or even to a restaurant or bar to celebrate my tenth wedding anniversary, and several of my favorite such places have been put out of business by it anyway.

But I’ve been luckier than many, avoiding tragedy and financial ruin so far, I have to be thankful for that. And without a doubt, losing hours at the day job has given me more time with my wife, pushed me to finally finish my book, and to read more books than I have in years. And it gave me the space to dig ridiculously deep into my summer movie retrospective. It’s corny as hell but I really believe this: it’s allowed me to spend more time with all of you. And I’m genuinely thankful for that. So thank you.

Be safe, everybody, and keep your head up. If MIMIC 3: SENTINEL can make it in this world then so can we, I promise you.

Alexis Dziena Amanda Plummer Donald A. Wollheim J.T. Petty John Kapelos Karl Geary Keith Robinson Lance Henriksen Rebecca Mader
This entry was posted on Wednesday, November 25th, 2020 at 10:36 am and is filed under Horror, Monster, Reviews, Science Fiction and Space Shit. You can follow any responses to this entry through the RSS 2.0 feed. You can skip to the end and leave a response. Pinging is currently not allowed.