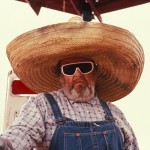 So that is what ol’ Vern did yesterday, I went and saw the BLOOD SIMPLE movie that every motherfucker has been recommending to me left and right. “Vern, see Fargo. Vern see Blood Simple. Vern, see Big Lebosky.” Well Blood Simple was playing at the Seattle’s International Film Festival, a film festival here in Seattle. 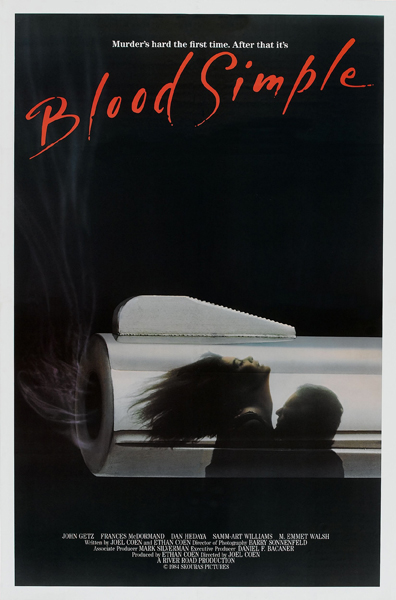 Now this was interesting because I always thought this would be a video type movie, but it was playing at the fancy Cinerama theater, the biggest screen in seattle besides Imax. Which is a large type of screen they have. And there it is in all it’s glory. The movie starts out with an older individual, a gentleman smoking a pipe sitting at a desk reading a book. Not sure who this dude is, maybe he is from AMC I’m not sure. He explains how the movie changed the face of Cinema, blah blah blah, restored, blah blah. A little bit too educational for my tastes. But then the picture starts.

Now Harry I don’t know if you have got a chance to see this picture yet. It has only been available for about 10-15 years. But it is a good one. You see, it is about a slow, quiet dude who works at a bar, and he is having an affair with his boss’s old lady, Abby. So his boss hires this fat old cowboy private eye to find out who Abby is having an affair with. And then to kill them. M. Emmett Walsh plays the fat dude and this guy is hilarious. He talks in a garbled drawl like most directors wouldn’t allow their actors to use. This is point #1 for the Coen brothers, the auteurs behind this particular picture. (Auteur means the author of the picture, which in my opinion is the director.)

Now the plot is kind of complicated, but basically what it is is a noir thriller type deal, except every character is a fucking nitwit. I mean these people are slow. They don’t know the same things the smart people in other movies know. They try to clean up blood with a windbreaker. Then they throw the windbreaker into a powerful garbage burner, but bring the body somewhere else to bury! They don’t cover their tracks, literally, and they don’t communicate properly, so every one of them is always two steps behind all the others. They don’t know WHAT in hell’s name is going on, ever. There is one main character who dies about a half hour in, and at the ends of the picture another main character thinks he’s still alive. And doesn’t know who the fuck the other main character even is. Well lack of communication is the #1 blunder a criminal can make, I can testify to this personally as a matter of fact, and that’s why these individuals, you just laugh at them. It’s funny cause it’s true. Ha ha, it is funny in my opinion, although it is a very dry type of humor like the hot Texas air of the film’s setting.

Eveyrone is sweaty also probaly should have mentioned that, it is hot.

Anyway this was a good picture and in my opinion the auteurs behind this one are someone to look out for. They are pure, visual Cinema, communicating through the language of Cinema instead of words. There are long stretches, like the burying the body sequence and the last scene in the apartment which have no dialogue. There is also an individual who gets kicked in the balls, and then he throws up. That is good filmmaking. The sound effects are excellent although unfortunately there was a quiet high pitched squealing during this screening but in my opinion that was a sound system problem and not an intentional function of the filmic work. It will be interesting to see what these Coens do if they work with someone else’s script, someone who gives the actors a little more dialogue to work with.

If you get a chance to see this piece on the big screen (I’m talking about an actual theater not on your big screen tv jackass) I would recommend it. This really plays well in front of an audience, to be frankly honest everybody was laughing and having a good time. Especially at the end, I don’t want to give away what happens to this fucker but it is awful and painful and you will have a good time. Fun! Also if you have seen the movie before, they have changed it around a little by cutting stuff out. For example the nerd in front of me is complaining about they cut out some dialogue of Maurice, which made the picture a weaker product as a whole or what not. Well this is the type of thing the ain’t it cool newsies like to see, they will figure out what was cut out and complain about it in talk back. So I think you will enjoy this one gang.

Anyway thanks guys keep up the work blood simple is a good one.

Coen Brothers Dan Hedaya Frances McDormand M. Emmet Walsh
This entry was posted on Tuesday, January 1st, 2002 at 2:48 pm and is filed under Crime, Drama, Reviews, Thriller. You can follow any responses to this entry through the RSS 2.0 feed. You can skip to the end and leave a response. Pinging is currently not allowed.

One Response to “Blood Simple”