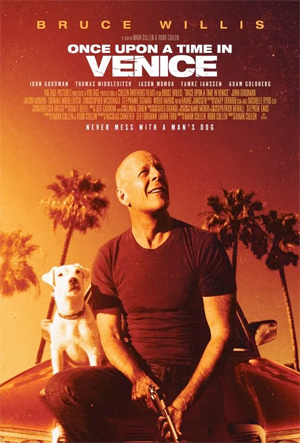 #1 is easy – he tracks Nola to a sex addict support group and sends John to pick her up. But #2 is trickier, and also complicated by fallout from #1. Nola’s brothers (Kaleti Williams [many credits playing bouncers] and Myles Humphus [stunt double for The Rock]) find Steve having sex with her, and they don’t respect her autonomy or something so Steve has to run and hide at his friend Tino (Adrian Martinez, AMERICAN HUSTLE)’s pizza place, and Tino makes him go steal back a lowrider from a drug dealer named Spyder (Jason Momoa, BULLET TO THE HEAD), so gangsters chase and threaten him and steal his dog. His niece Taylor (Emily Robinson, EIGHTH GRADE) loves that dog. This will not stand.

There’s a fairly hefty amount of wackiness, some too broad for my tastes, some goofy enough to list as selling points. For example, Bruce’s character is also a skateboarder. We first see him giving a lecture to some kids at a skate park, but it’s still surprising when he drops in with them. When he gets caught screwing there’s a long scene of him (well, presumably his stunt double/fight choreographer Stuart F. Wilson [Cowboy from BLOOD & BONE]) skateboarding naked down city streets. It’s like DIE HARD but instead of having no shoes on he’s totally naked. I always thought that should’ve been the progression of the sequels.

Steve’s best friend is played by John Goodman (DEATH SENTENCE, THE FLINTSTONES), who owns a surf shop. And he wears a wire when receiving divorce papers just so Steve can listen in and give him advice that he’ll ignore.

Momoa sports a Hulk Hogan mustache and bandana and does a “Cholo” stereotype the whole time (that’s not a word I use, but I don’t know a better way to describe it). I don’t think that’s allowed? But the character does take advantage of Momoa’s inherent strength for playing lovable scary guys. Violent gang shit kinda seems like the chores he takes responsibility for when he’d really rather be hanging out in the living room getting baked with his friends. Steve shouldn’t have messed with him, but he’s pretty laid back most of the time.

By the way, if you’re wondering “Does ‘Product Placement Blog’ have eight screen captures of ‘DXRacer Chair Used by Jason Momoa in Once Upon a Time in Venice (2017)’?,” the answer is “yes.” It is apparently a video game chair. He has at least three of them around a card table, two red and one blue.

A couple other notable actors and comedians show up. Famke Janssen plays Steve’s sister-in-law. There’s some sexual tension there I think, so I thought she was his ex or something. Christopher McDonald (BREAKIN’, BEST OF THE BEST 3) shows up. Ron Funches plays a crossdresser or a woman, not sure. Kal Penn plays a grocery store clerk. Wood Harris plays a gangster named Prince (no relation to the Prince). The rapper Tyga (Scream TV series season 3) plays a graffiti artist. And there’s a humorously random cameo where David Arquette (the actual SCREAM) just walks by and we learn that he used to be in a band with Steve. Apparently his name character is named “Diesel Stone.”

I consider ONCE UPON A TIME in a movie title to promise an epic or a masterpiece. This certainly doesn’t belong on a shelf with ONCE UPON A TIME IN THE WEST, ONCE UPON A TIME IN AMERICA, ONCE UPON A TIME …IN HOLLYWOOD, or even ONCE UPON A TIME IN MEXICO. But it is notable as one of the few recent Bruce movies, DTV or otherwise, where he actually seems excited to be there and play a character. I guess I usually skip his comedies, maybe that’s the problem. But I was really happy to see old funny Bruce again. (Most people seem to disagree – 19% on Rotten Tomatoes, one star on Amazon.)

This is the directing debut of writers Mark and Robb Cullen, other than a web cartoon turned movie called GARY THE RAT (2000). But they wrote a bunch of TV shows and Bruce’s COP OUT. I guess he liked them enough to show up and smile.

2 Responses to “Once Upon a Time in Venice”