Out for a Kill

No hot air balloons in this one. At least, not to the best of my knowledge. But who cares what it’s about? I’ll take any opportunity to read a review by Seattle’s finest film analyst, the one and only Vern:

Well I think it’s been a real good movie summer so far with RETURN TO THE MATRIX and THE AMAZING HULK and CHARLIE’S ANGELS GO FULL THROTTLE and JOHN ASHCROFT VS. THE X-MEN and etc. But now we’re at that crossroads of summer where it could go either way. Now it’s the more iffy movies and the sequels you’re not sure you want or you know for sure you don’t want. Okay, sure, people always wanted TERMINATOR 3 but did they want it if it had to be directed by the guy who made that submarine movie that they never bothered to see, even though they heard Bon Jovi got his head chopped off? A more extreme case is BAD BOYS PART 2. Oh yeah, I always wanted to revisit those great characters, officer (insert will smith’s character name) and officer (guy from big momma’s house). It will be great to find out what has happened to them since that bank robbery, murder, drug deal, kidnapping or whatever the fuck it was that they stopped back in that other movie. I wonder if they still like to sing the theme song from “COPS”, which was already a dated reference when the first movie was made like TEN FUCKING YEARS AGO. Maybe this one will be more up to date and they’ll get some Judge Ito jokes in there. Maybe throw in a “Is that your final answer?”

So fuck that shit, we need something that will bring us all together in unity and togetherness and what not. So what I have for you today is a review of something we all can agree on, and that is a new Steven Seagal straight to video movie. With the release of this movie, everybody wins: Seagalogists like me can study his new works in the privacy of their own homes, everyone else can pretend Seagal does not exist since they do not see his name on a marquee. 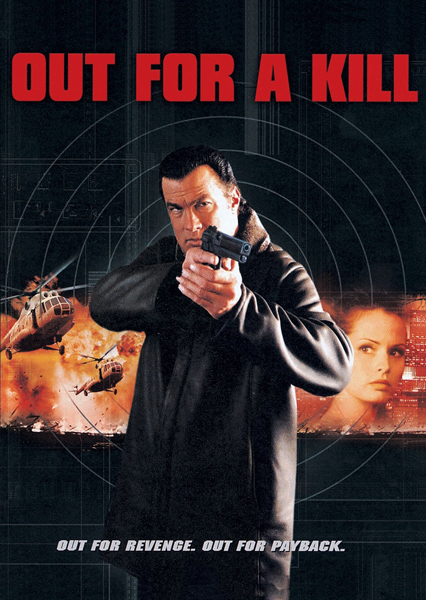 With that in mind… what do you call it when you’re not really OUT FOR JUSTICE, and you’ve already said you were HARD TO KILL, and you want to come up with something else to call yourself? Well, how about OUT FOR A KILL? That is in fact the name of the new picture.

You *are* home. I was gonna ask you some questions about buddhism earlier but I couldn’t find you. “Oh yeah, I just stepped OUT FOR A KILL for a minute.”

Seagal plays Professor Robert Burns. No, not the brilliant art director of TEXAS CHAIN SAW MASSACRE and THE HILLS HAVE EYES. This Robert Burns is a professor of Chinese archaeology at Yale. Early in the movie he is given an award by the college and introduced as Yale’s “most distinguished academician”. (I wonder if he knows George Bush?) Soon we see him in China digging up ancient relics and explaining what they are to his lovely young asian assistant. When a thug disguised as a Beijing University archaeologist steps on an ancient relic and crushes it like a Dorito, Professor Burns just asks, “What’s up with this guy?”

Well it turns out what’s up is that several families of Chinese gangs have decided to unite to sit at an evil table in Paris and frame Professor Burns for drug smuggling. Before you know it they’ve murdered his assistant and he’s captured by a Hong Kong cop and cynical american DEA agent who think he’s guilty but let him go so he can lead them to the chinese gangs.

Things get even worse for Yale’s most distinguished academician when he gets attacked at a restaraunt (why do thugs always flip over the tables before they start shooting?) and then at the assistant’s funeral. Plus they kill his wife! What a bunch of assholes! So he goes to the assistant’s dad and says, “The souls of our enemies will be ashes and dust gone in the sky before the funeral of our loved ones. That’s a promise.” And thus begins an international quest that will mean revenge for himself and joyous entertainment for hundreds of action movie fans all around the world. In other words, he goes OUT FOR A KILL.

I will be the first to admit that some of Seagal’s movies are pretty boring, including his last one with this director, THE FOREIGNER. But this one is a classic. The director of THIS WORLD, THEN THE FIREWORKS has teamed up with the writer of CYBORG COP III and the producer of OCTOPUS 2: RIVER OF FEAR to create one of Seagal’s most deliriously stupid pictures in quite a while. It doesn’t have the hilariously preachy/strangely subversive themes of his masterwork ON DEADLY GROUND but it breaks all kinds of new ground for Seagology, from the CGI Buddha used as a logo for Seagal’s production company to Seagal’s unique response to the popularity of wirework. (more on that later)

If you know your Seagal movies you may be wondering if Professor Burns is not just Yale’s most distinguished academician, but in fact Yale’s most distinguished EX-CIA academician. Well no, but he does have a secret past. It turns out that before his tenure he was a legendary international thief of valuable paintings and chinese artifacts known as “the ghost.” Some thought he was dead but actually he did 7 years in the joint where he earned his doctorate in Chinese archaeology, created a new identity and became a professor. Or so one of the chinese gangsters says at the evil table in Paris in between numerous pronouncments that “the gwilo professor is becoming a problem.”

Seagal is looking wider and moving slower than ever, and part of the joy of his pictures these days is seeing how they will try to convince the audience that he is some sort of an action hero. Early on it looks like all the action will be vehicle related, driving jeeps around splashing in puddles or a hilarious scene where he commandeers a small plane to scare its pilot into giving him information. (The pilot says his nickname is Crash “because I never have” – like that’s something to brag about. Shouldn’t most pilots be nicknamed Crash then?) But hang in there because there are some fight scenes that really deliver the laughs. Seagal has apparently thrown out the girdle and lets it all hang for some of his most Dolemite-esque fights to date.

In the first sword fight there are at least 2 shots that slo mo not Seagal, but the opponent jumping up in the air, and then all Seagal does is hold his sword up to block.

Later there is a fight with a master of monkey kung fu who flips through the air and climbs on the walls and ceiling. Despite all these acrobatics Seagal stays on the ground the whole time, lumbering around, waiting for his chance to punch the guy or pick him up and spin him around. The fight takes place inside the “Hidden Dragon Barber Shop” which is probaly Seagal’s way of telling Ang Lee and Yuen Woo Ping “thanks alot assholes” for bringing the art of fight choreography to levels even further beyond his reach.

Some of the filmatism can be annoying – lots of gratuitous slo-mo, and of course those subtitles that roll out onto the screen making little computer noises. Why do they always do that in movies? Is it supposed to be high tech? Does anybody really have a computer that makes those noises? I say just throw the computer out because when the dialogue tells me they’re at Yale I don’t really need to know what time it is or that it’s “Yale University, New Haven, Connecticut.” And I sure as fuck don’t need to know the names, nicknames and hobbies of each of the villains. That does not count as characterization when you just write it on the screen. Still, the low budget makes for some laughable visuals that many will get a kick out of, including a very obvious miniature model, alot of silly bluescreening and yes, a ridiculous bullet time inspired shot.

There are too many transcendant moments in this picture to list but I will mention a couple. I really liked the part where the Hong Kong cop was snooping around the evil S&M lesbian drug trafficking tatoo parlor and the tatoo artist asked, “Hey, do you want a tatoo?”

But my favorite was the scene where Seagal was locked up in a Chinese prison with an african-american cellmate. I guess Ja Rule wasn’t available to fill in for DMX so they just got some dude and then they made his role completely useless. Seagal asks his new friend how he got locked up and about one sentence into his story, it goes onto another scene. The dialogue fades out mid-sentence so at first you think it’s going to flashback to tell the guy’s story, and then you realize that no…. the movie just didn’t give a shit about his story and turned its attention elsewhere. Later, when Seagal gets let out, it’s like these two guys just survived a plane crash together. They give each other a hug and a pound and Seagal says, “Once a friend, a friend for life.” The guy says, “Don’t forget about me!”

And he is never seen or mentioned again. This is an incredible film.

If you only see one movie this summer, and it is an asinine new straight to video movie starring Steven Seagal, OUT FOR A KILL is your best bet. So mark the date August 19th on your calendars. I highly recommend this piece of moronic garbage.

Thanks, man. Between you and Foywonder, we manage to fill our quota of obligatory references to OCTOPUS 2. Nice work.

DTV Seagalogy Steven Seagal
This entry was posted on Friday, July 4th, 2003 at 5:16 am and is filed under Action, AICN, Crime, Reviews, Seagal, Thriller. You can follow any responses to this entry through the RSS 2.0 feed. You can skip to the end and leave a response. Pinging is currently not allowed.

4 Responses to “Out for a Kill”