Well, it turns out Tommy Lee (Phillip Rhee) agrees. Killing Brakus “went against everything I believe,” so he quit teaching, left Eric Roberts behind and seems to be driving across the country visiting his sister to rediscover himself, just like Seagal did at the beginning of MARKED FOR DEATH. Actually it’s weird because Tommy gets sideswiped and his car gets fucked up, which is a classic way of stranding an action hero drifter in the middle of nowhere to have an adventure. But then it turns out he was headed there anyway because that’s where his sister lives. This might be because it was originally written as a standalone movie but director/star Rhee had it modified to somewhat fit his BEST OF THE BEST character. 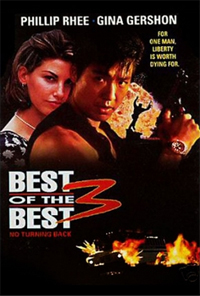 Of course, when a best of the best comes into a small town it’s his responsibility to give any necessary karate help. And it’s obvious that will be required because this town’s got a serious Neo-Nazi problem. Not only is a white separatist church led by R. Lee Ermey trying to buy up a bunch of property, but a skinhead gang recently murdered a black priest. Tommy’s brother-in-law (played by Christopher “I eat pieces of shit like you for breakfast” McDonald) is the sheriff, but he can’t prove anything.

Like all drifter action heroes Tommy tries to say “I don’t want any trouble” and stay out of it, even when a bunch of racists flip him shit in a diner. But of course he does end up unleashing his best of the best skills, most notably during an incident at a charity carnival. When a skinhead slaps caring school teacher Gina Gershon (RED HEAT, OUT FOR JUSTICE) Tommy steps in and has to fight all the skinhead’s friends and smash alot of innocent carnival booths. It’s all very typical, right down to the ending where she’s not grateful to him for saving her ass and instead mad that he resorted to violence. But since he was volunteering for the dunk tank he does the entire scene in a clown suit, kicking with giant clown shoes and managing to keep the round, red nose intact. It’s a sign that Rhee has a bit of a quirky directorial style, because the music and everything in the fight is played completely straight until the last shot where he awkwardly waddles away in the giant shoes.

If Gershon’s not enough strong-woman-in-over-her-head for you there’s also Dee Wallace Stone as the skinhead’s long-suffering ma. These ladies speak their minds and try to prevent all the white yahoos in town from turning this into Hitlerland or Universal Islands of Intolerance. Gershon makes a righteous speech at a town meeting (dabbling in a southern accent straight out of a high school production of To Kill a Mockingbird) so she becomes a focus of their racist energy in between cross-burnings and intimidation car smashings.

Racists are usually great bad guys just because it’s enjoyable to see them get beat up. But the BEST OF THE BEST series maintains a bit of a BILLY JACK or ON DEADLY GROUND type of philosophy, so Tommy passionately says that “hatred is not the answer!” and tries to teach little minority children not to hate back. And to show that there’s some grey area here we learn that Ermey – while he openly admits to being a racist and a separatist – is outraged when he finds out that his #2 bought a bunch of weapons to start a race war. He says the Bible is against it. Later on some of the other followers get cold feet. So the idea is that some of these people can be redeemed. Kind of ruins the fun of white supremacists as all-purpose bad guys. But oh well, I still enjoy seeing them get kicked through windows.

I guess the problem though is that these are stock white supremacist characters (the hate-spewing military leader, the angry and confused teenager) and not really fun or unique villains. Just completely forgettable. Despite their Aryan skin they’re completely lost in the shadow of part 2’s Brakus.

Speaking of race, it is nice to see an Asian-American as the only lead and fulfilling the classic American role of the undershirt-wearing drifter. As story writer and choreographer it seemed like Rhee was the heart behind part 1, but typical Hollywood bullshit made him into somewhat of a side character to Eric Roberts. Here there’s no doubt he’s the main attraction.

There’s NO TURNING BACK because after this BEST OF THE BEST is not gonna return to the big screen or bring Eric Roberts back into the fold, but it was still kind of a cool direction to take the series in. I always think it would be cool to see the heroes (or even supporting characters) return in completely different types of adventures. Like if there was a REDBELT 2 where he has to stop a plane hijacking or breakinto an underground bunker to steal treasure or they’re gonna kill his brother. BEST OF THE BEST 3 is definitely the worst of the BEST OF THE BESTs, but I still somewhat enjoyed seeing the Tommy Lee character’s continued adventures. This guy can go all over the world and get involved with all different types of adventures (legitimate sports, underground fighting, beating up racists)

I’m also happy that Phillip Rhee was able to graduate to director, even if it’s just for a DTV sequel that’s released as a double feature with part 4. Original BEST OF THE BEST director Robert Radler must’ve liked it too, because several years later he did THE SUBSTITUTE: FAILURE IS NOT AN OPTION where The Substitute takes on white supremacists.

Dee Wallace-Stone DTV DTV sequels Gina Gershon Phillip Rhee R. Lee Ermey white supremacists
This entry was posted on Thursday, July 29th, 2010 at 2:08 pm and is filed under Action, Martial Arts, Reviews. You can follow any responses to this entry through the RSS 2.0 feed. You can leave a response, or trackback from your own site.