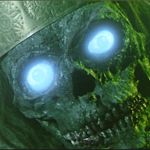 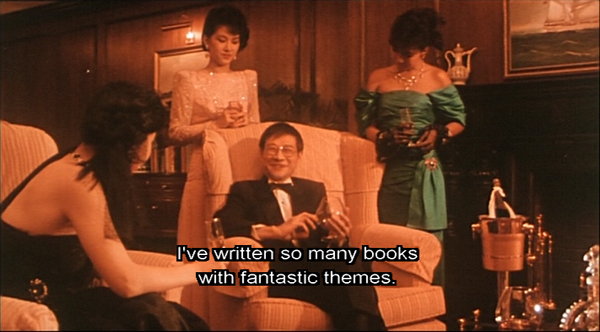 He says that people always ask him where he gets the ideas for his books, and “this is a stupid question.” He gets the ideas from things that happen all around him, “For example, two of my friends are here,” and he introduces our heroes, also at the party, having drinks (Remy Martin gets a credit) and congratulating the new Miss Asia and what not. And he invites Dr. Yuen to tell about his “daring adventure” he had recently with Wisely. But Yuen says that Mr. Ngai tells it better, so he narrates. 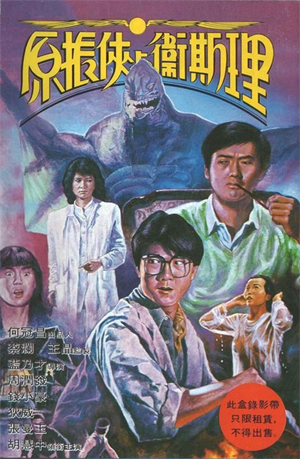 It starts out as a cop movie, with nerdy Dr. Yuen helping the police with a big hostage crisis, going into a building with a reporter disguised as a cop disguised as a nurse who turns out to be Wisely’s “spoiled cousin” Rainbow. Long story, I assume, though I didn’t follow it.

Dr. Yuen drives a Porsche and carries in his trunk a weird balloon thing that he can attach to someone’s exhaust pipe so it inflates and raises their back wheels. But he’s not as pepared for a guy from Thailand named Black Dragon (Dick Wei, YES, MADAM!, EASTERN CONDORS) showing up in his house, so that leads to a big fight that smashes a bunch of his stuff. But he sort of resolves things and the fight doesn’t break up his sex date – leave that to the blood spell that causes his veins to pop out of his leg and pulsate.

He goes to Wisely for advice, explaining that it all started with his trip to Northern Thailand, searching for an herbal cure for AIDS. There he saw a lady named Betsy (or sometimes “Besty” on this DVD) (Chui Sau-lai) bathing and then saw her again when he went to spy on “The Worm Tribe” and saw their long-haired leader Sorcerer Aquala (Elvis Tsui, THE BOXER’S OMEN) try to sacrifice her in a torch-lit ritual at their pyramid. The translation of this DVD makes it funny because the sorcerer refers to his followers as… 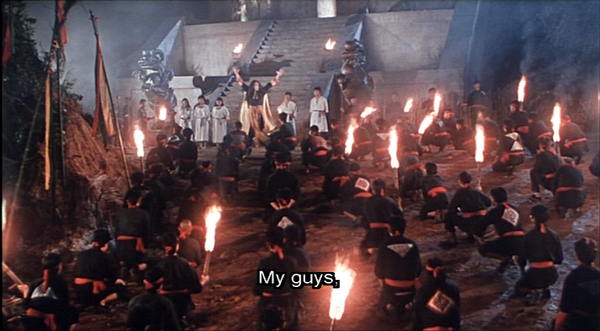 About 23 minutes in we have our first “holy shit, I’m glad I watched this” moment when one member of the tribe requests “please don’t offer her to God” and the sorcerer suddenly produces, from god knows where, this handsome little fucker right here: 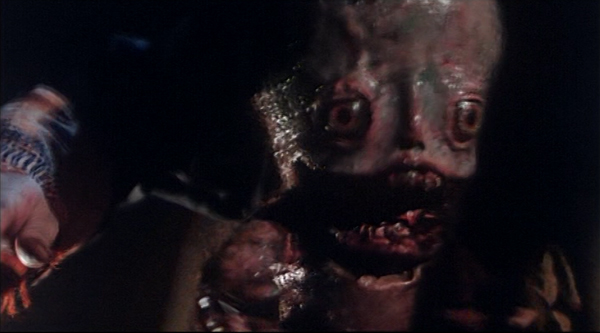 and he throws it with a magical green ghost toss and it chews the guy’s face off and eats its way inside him and tears out of his belly. BABALITY! Covered in blood, it clings to the sorcerer’s side and he just kinda pushes it behind his back and it’s gone. Cool magic trick.

Later we learn his name is Little Ghost. Later, he’s explained thusly: ”Yes, it’s made of 100 children’s blood. They can fly, suck blood and kill people. The spell has to be remade after three years.”

I like Little Ghost. But he’s just a henchbaby. The sacrifice is to an older gentleman called Old Ancestor. He’s basically a skeleton who crawls out of his coffin and looks coolest when his eyes glow. 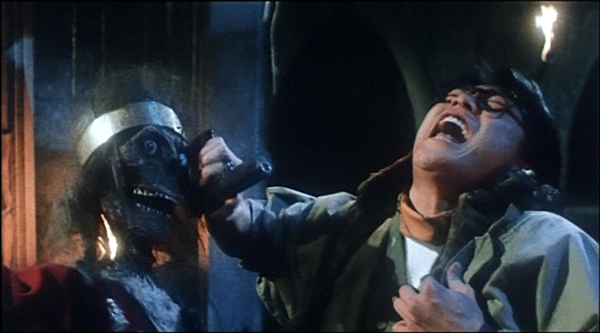 He wobbles around and bites and slurps up some viscera and then grows into a sort of alien demon thing. When his rubber head stretches it looks so much like a morph I did a double take. I’m actually not sure how they did it.

Anyway, you know how it is – Betsy gets naked, cuts open a boob and pulls out a worm that she feeds to Yuen as a spell to protect him for one year but now her boyfriend Black Dragon is trying to warn him that his time is up and after Wisely hears the story he determines that each of the seven places he was blood-stained will welt up and in five days he’ll be dead. Sorry bud!

So Wisely sends Yuen back to Thailand, where he says he’ll meet him later. Wisely gets to the hotel and there’s a Rambo-movie worthy arsenal of guns laid out courtesy of rich girl Rainbow. He doesn’t think that’s a good way to fight witchcraft, and doesn’t want her going with him. She jokes “What, are you gonna tie me up?” and it jump cuts to her tied up with sheets and he puts shipping tape over her mouth. What the fuck? 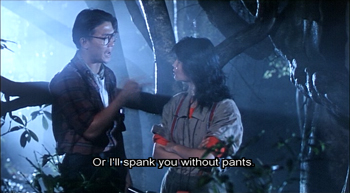 I don’t know if it’s specific to the Dr. Yuen character, or just a sign of the times and culture in which it was made, but he is not respectful of the women. He makes some inappropriate threats (left). On his best behavior he’s pretty patronizing. This lady has established she can handle herself multiple times and he says, “Rainbow, I have to be responsible for your safety if you’re with me. It’s too dangerous. I can’t let you go.”

“I don’t care. What a male chauvinist!” she says. She threatens to go off on her own, then falls into a pit. He doesn’t notice and assumes she left, therefore not discovering that she gets kidnapped by the tribe. But Dragon figures out and they go find her tied to a column near where they’re crushing the children between blocks of stone and squeezing the blood out like a juicer (cultural thing). She gets cursed but luckily Betsy knows to soak her in a tub of blood that turns into milk. 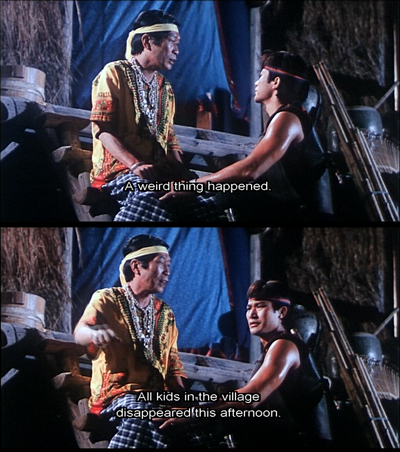 Anyway the point is they have to get some special ashes before Yuan’s seventh curse bursts and spills all his blood. They didn’t have WebMD back then, but luckily Dr. Wisely asks a few questions and knows what to prescribe: “Get a pregnant cow at once. Slaughter it and get her placenta out. A black dog as well and get its blood.” He says a friend of Aquala taught him that for breaking a Little Ghost spell, but he doesn’t know if it works. And meanwhile Yuen and Black Dragon have to do a quest that no one has ever survived: climb up a giant Buddha statue, fight all the kung fu masters that appear on it, pry out its eyes, cut one open, eat the glowing ball of magic inside, then go to a different place to eat the other one within a certain amount of time. Which at the time seemed kinda crazy but obviously now is common medical practice.

There’s a RAIDERS OF THE LOST ARK tribute when they have to run from a giant rolling Buddha head. And it traps Yuen against a wall but since it has a nose it doesn’t smoosh him like Indy’s boulder would’ve.

Betsy has been cursed so that half of her face melted. She’s ashamed to let anyone see it and covers it with a hood. Nobody uncurses her. She just has to live with it. This is the Dr. Yuen series, after all, not the Betsy series.

There’s actually a gwilo in this who’s not a bad guy! He’s “The Professor” (Ken Boyle) who leads the exposition and correctly warns everybody to never spy on the Worm Tribe. But since they do he ends up getting magic slime poured on his head and his face mutates and then he tears open his own belly and meal worms pour out. Not cool. And think of his students back at home.

The insane magical warfare with complicated rules that seem to be made up on the spot reminded me of THE BOXER’S OMEN, though it’s not as detailed. It’s more than enough black magic and gooey monsters to qualify as horror, but there are also bursts of kung fu and some car stunts, like when they drive over some huts and up some stairs and then go into a cave shooting dudes and making them fly through the air. Action director Yuen Bun also did many well known ’70s and ’80s films, including BLACK LIZARD and MERCENARIES FROM HONG KONG. Later he became Tsui Hark’s go-to guy, even doing KNOCK OFF and several of the recent ones (DETECTIVE DEE AND THE MYSTERY OF THE PHANTOM FLAME, FLYING SWORDS OF DRAGON GATE, YOUNG DETECTIVE DEE: RISE OF THE SEA DRAGON).

At the end there’s a fight between Little Ghost and Old Ancestor in demon form and then Wisely blows up Old Ancestor with a bazooka. They were obviously proud of this part – we see him pop from four different perspectives – and hell, they oughta be. The monster falls to his knees and his guts fall out and then he gets back up and Wisely has to shoot another one into his head and we see that a couple times too. See that, Dr. Yuen? Military weapons do work on witchcraft. Stupid. Listen to Rainbow next time.

Director Lam Nai-Choi was a cinematographer starting in the ‘70s and then directed 13 movies from 1981-1992, the final one being STORY OF RICKY. THE CAT (1992) is also a Wisely story, but he’s played by Waise Lee in that one.

*I first heard Mama Lil’s Peppers pronounced “mama little’s” and have been calling them that for years. Today, when trying to make sure where the apostrophe goes, I realized that they are named after a “Mama Lil.” So, uh, that’s embarrassing.

Chin Siu Ho Chow Yun Fat Dick Wei Elvis Tsui Lam Nai-Choi Ni Kuang Wisely Wong Jing Yuen Bun Yuen Gai-chi
This entry was posted on Monday, October 21st, 2019 at 10:00 am and is filed under Action, Horror, Reviews. You can follow any responses to this entry through the RSS 2.0 feed. You can skip to the end and leave a response. Pinging is currently not allowed.

8 Responses to “The Seventh Curse”