Since 3 FROM HELL is not as good as REJECTS, and not as big of a leap from its previous chapter, it doesn’t feel entirely necessary. And that makes it harder to ignore the hollowness of these movies. As far as I can tell they’re not saying much, just trying to be provocatively inappropriate, and they’re less about human beings than about Zombie’s fetishes: weird clowns, redneck chic, tattoos, bushy beards, satanic symbols, Manson Family nostalgia, ’70s rock montages, kitschy western gear over cheeky retro-t-shirts, black and white monster movies playing on old TVs. But I can appreciate most of that stuff, so I can enjoy an occasional dip into Zombie’s distinct mix of uncomfortably fucked up shit, cool visuals, some laughs and some stretches where you realize you’re too invested in these terrible people and feel like an asshole.

The first 10 minutes catch us up on the Fireflys’ one-in-a-million survival from REJECTS’ climactic “Free Bird” hail of gunfire through tabloid articles (complete with anatomical diagrams), news broadcasts and “documentary” clips. Not usually a fan of found footage or mockumentary myself, I was won over by Zombie’s impeccable taste in print design, ugly period fashion and faded film stocks (though this is the only in the trilogy to be shot digitally, it’s degraded to a gorgeously grainy quasi-16 mm look). I just got a big kick out of the way it turns their preposterous survival into lurid headline drama, introducing the theme that they’ve gone from a terrifying secret house of horrors to media celebrities. I knew I was on board as soon as a news anchor used the phrases “The Devil’s Rejects” and “House of 1,000 Corpses murders” in a sentence.

As for this latest sensationalistic title, there’s some bad news about the 3 From Hell, if you haven’t heard. Though clearly meant to refer to Baby (Sheri Moon Zombie) Otis B. Driftwood (Bill Moseley) and Captain Spaulding (the late Sid Haig), the latter was too sick to film much, and only has one scene, in which his visibly poor health (made even worse by makeup, I think!) is pretty depressing. Zombie had to quickly rewrite so that the other two are joined by Otis’s previously unmentioned half brother. It works, though, because

1. I was never clear how many of these Fireflys there were anyway, it seemed like they were all over the place

3. His character is named “Winslow Foxworth ‘Foxy’ Coltrane a.k.a. The Midnight Wolfman.” 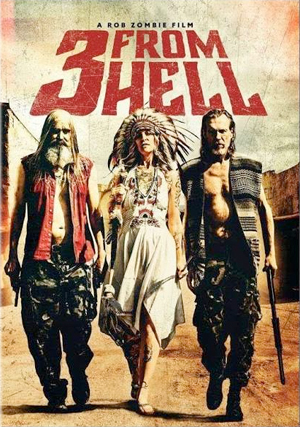 My least favorite section is when Otis and Foxy home-invade Virgil Dallas Harper (Jeff Daniel Phillips, LORDS OF SALEM, SATANIC PANIC) the extravagantly mustachioed warden (of both male and female prisons?) to force him to help bust out Baby. It’s got some of that REJECTS/LAST HOUSE ON THE LEFT style queasy torment of innocents, and suddenly a birthday clown named Mr. Britches shows up for no reason? You know how it is when clowns get the wrong address. It seems a little too “Really, Rob Zombie? Another clown?” On the positive side, the clown is played by Clint Howard, and his death sets up one of my favorite dialogue exchanges:

Baby: “What’s up with the dead clown?”

The scenes of Baby in prison are better because they’re unlike the others in the series. She’s too crazy to put on a show for the parole board and then she breaks the nose of prison guard Greta, who I felt for, especially when I realized she was Dee Wallace, but like most Zombie characters she turns out to be a psycho. She tries to get revenge by locking Baby in a PENITENTIARY III style dungeon cell and letting some of the big girls jump her. Baby bides her time by hallucinating a black and white ballerina in a cat mask and manipulating Greta’s sexual attraction to her.

Baby is my favorite character in this one. I think Sheri Moon Zombie has found just the right level for her psychopath-who-skips-around-and-talks-like-a-little-girl shtick, and that’s before she finds a bow and arrow. Otis seems weirdly less evil in this one, sometimes even laid back before he gets into vainglorious-speechifying-about-being-The-Devil mode. One funny wicked moment is when he’s in prison and yelling for the cameras “I’m innocent! They got the wrong guy!”

One of REJECTS’ weak spots is how grating the siblings’ cursing at each other gets – here it’s mercifully toned down and sometimes replaced with a familial love, like in their conversation about missing Cutter (Captain Spaulding) and nothing being fun anymore. It’s touching if taken in isolation (or as a metaphor or something) but it ends with brother and sister warmly resolving to do more “fucked up shit” than ever. And we know how prolific they’ve already been!

A funny brother-sister moment is when they’re on the verge of both being killed for something Otis did and he says, “Let her go. She’s got nothin to do with this.”

“Yes I fuckin do!” she says, offended.

The Fireflys are famous now. They have groupies wearing their t-shirts at the courthouse and get in arguments about who’s most likely to be recognized checking into a hotel. That’s a practical consideration for fugitives, but it’s clearly more about pride to them. Foxy is insulted that Otis doesn’t consider his crimes to be that bad, and he hates how he looks in his mughsot on TV (wearing a “DISCO SUCKS” t-shirt, by the way). When Baby seduces a random dude he says she looks like that girl on TV, but it can’t be her, because she broke out of prison, and without hesitating she says “No, that’s me!”

The last stretch (LAST ACT SPOILERS) is the most different for the series. Like in a western, they hole up in a small town in Mexico. It looks a little more cheap and less controlled than the rest of the movie, but I kinda like that looseness. Zombie’s talent for giving fun roles to underappreciated actors rears its head in the form of Richard Edson (DO THE RIGHT THING, SUPER MARIO BROS.), absolutely going to town on a southern accent as the sleazy, treacherous innkeeper Carlos Perro. He provides them their artfully shitty accommodations and immediately sells them out.

I didn’t mention that during his breakout Otis executed fellow inmate Rondo (Danny Trejo). So it’s just his bad luck that he’s hiding out in the town where Rondo’s worshipful son Aquarius (Emilio Rivera, EL CHICANO, ACT OF VALOR, STREET KINGS, MURDER WAS THE CASE) leads a deadly cartel of luchadors called The Black Satans.

Sebastian (Pancho Moler, BAD NEWS BEARS, CANDY CORN) is another cool character, a noble local who, having no idea how terrible these people are, puts his life on the line to protect them. He’s a little person, so when Baby compares him to her late brother Tiny (my favorite character from CORPSES) he doesn’t know at first that she’s talking about a giant, and is insulted.

I like the way the movie messes with identification and the idea of good guys and bad guys by giving us characters like Sebastian and the hookers who are having fun with The 3 and never find out they’re From Hell. Aquarius is treated as a scary antagonist, but he has the understandable motive of avenging a murdered father. I didn’t remember that Trejo’s character was from REJECTS, so just like him I had no idea why Otis had it out for him. That made it kind of cool – a back-and-forth of unknown origins.

For the 3 it kind of turns into a hangout movie, though obviously Baby defeating some tough guys in a knife throwing contest also sets up what will happen later. The final conflict begins with an “oh shit it’s on” scene that’s funny because Baby at first doesn’t realize it has anything to do with her. Out the window we see an El Camino pull up with three coffins in the back. Then two vans pull up and a bunch of huge guys in nice black or white suits step out. They wear luchador masks with pentagrams on the foreheads and hold machine guns. Baby sees them and is excited – what’s going on down there? Until she sees Carlos pointing up to her window. Wait, what the fuck?

In my mind I can see a connection between 3 FROM HELL, MANDY, THE MAN WITH THE IRON FISTS and hell, ONCE UPON A TIME IN MEXICO. They’re different tones and quality levels and I like them for different reasons, but they each exist in their own strange and heightened universes where exaggerated genre tropes are just a part of reality. Even when they’re not entirely working I like visiting the worlds of these drive-in movies from another dimension. And that should be a big compliment to a world as ugly and cruel as Zombie’s.

There are no signs in 3 FROM HELL that Zombie is evolving or becoming more thoughtful about anything. I kind of doubt he ever will. But if you tend to feel overall positive about his movies, as I do, this is another one.

Bill Moseley Clint Howard Daniel Roebuck Danny Trejo Dee Wallace Emilio Rivera Jeff Daniel Phillips Pancho Moler Richard Brake Richard Edson Rob Zombie Sean Whalen Sheri Moon Zombie Sid Haig
This entry was posted on Friday, October 18th, 2019 at 1:27 pm and is filed under Horror, Reviews. You can follow any responses to this entry through the RSS 2.0 feed. You can skip to the end and leave a response. Pinging is currently not allowed.