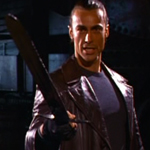 This time he’s named Steven Conlin (Daniel Bernhardt from BLOODSPORT 2-DARK KUMITE, ATOMIC BLONDE and Barry), and he turns out to be the reincarnation of a Macedonian soldier who tried to return the sword to Alexander, rather than Alexander himself. But once again he’s being lured to an underground fighting circuit to use the sword as part of a centuries-old vendetta from an Alexander foe reincarnated as a limo-riding death match manager. And just as in GLADIATOR COP it’s James Hong playing the historical figure Parmenion. Crazy coincidence! 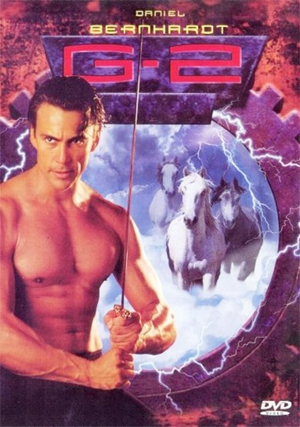 Conlin is not a gladiator cop, he’s a gladiator ex-cop. A third of the way into the movie he mentions that he “had a couple years on the force,” but never explains why “one day he just quit.” Lamas’ character was a detective protecting/fucking a museum curator/sword expert. In this one Conlin is the sword expert, living in an antique store like Connor MacLeod, also forging his own blades. The love interest, Cory (Meeka Schiro, “Tanning Salon Employee,” one episode of Degrassi: The Next Generation), is the cop. That’s kind of refreshing, because he doesn’t have to be as paternalistic, though it seems unprofessional that she immediately starts dating him during the investigation, and when she drops him off after dinner says, “Oh, by the way, you’re deputized!”

I should also mention the new addition that she looks like/is reincarnated from a princess or something who was involved in the past incident where the Macedonian soldier single-handedly defeated a Mongolian army, earning the wrath of Parmenion. There’s a sex scene between Conlin and Cory that cuts to their past selves also having sex, reminiscent of Connor and Deborah Kara Unger’s character in HIGHLANDER: THE FINAL DIMENSION. 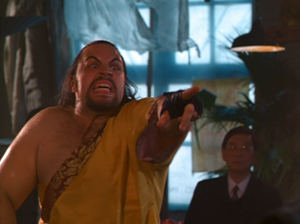 Unfortunately the sword bouts in this are not very exciting. There are some back flips and spin kicks and stuff, but the editing is pretty choppy and too many of the fighters seem like regional wrestling heels – big guys who constantly growl, roar and bug their eyes out like they think the camera is in the back row. It makes the preliminary battles pretty stupid, but does serve to make Bernhardt seem really cool when he shows up and is a lean, tall dude with slicked back hair, fighting in his long reddish brown leather jacket and moving like a martial artist, not a King Kong Bundy imitator.

As you might expect, some of the most enjoyable parts are the unintentional laughs. In one of the fights a yuppie guy involved in the betting yells “Come on, pretty boy! History man! Who the fuck do you think you are?” I don’t know how he knew he was an antique dealer, or why he thought that was such a harsh burn. Later an announcer (Louie Panneta, returning character from GLADIATOR COP!) introduces Conlin by saying, “And from who knows where, the underdog, with nerves of steal, The History Man!”

There’s also a part where he’s having a nightmare about the past and he wakes up screaming in anguish to nobody in particular. “AAARRRGGGHH! I can’t take the pain! Please help me!” Sorry, Conlin. You would think it was funny too if you heard you say it.

But definitely the best part is Conlin’s first duel, which is against a guy named Overlord (GLADIATOR COP lead opponent Christopher Lee Clements, now looking like a gritty reboot of the Cookie Crook). 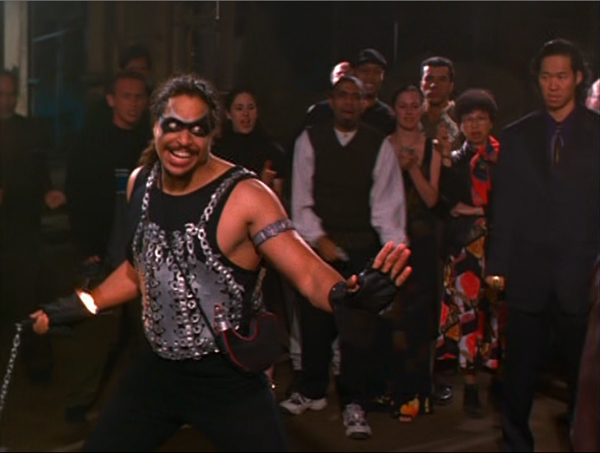 The Overlord spins a chain mace that spews gas from the handle so he can breathe fire. He spits a big fireball that catches Conlin’s leg on fire, and Conlin uses that leg to kick him a bunch of times. I mean, it doesn’t seem like that would make the kick burn or anything, but it sure is cool. 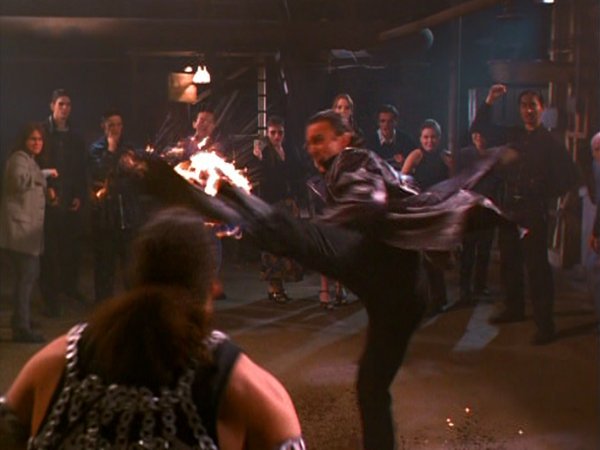 When Conlin puts the Overlord in a winning choke hold, Parmenion’s daughter/henchwoman (Bing Shen?), the reincarnation of the Persian princess Isis, shoots Overlord, which for reasons I don’t understand but don’t need to understand causes some part of his flamethrowing system to spew fire out of his sides as he screams in agony. 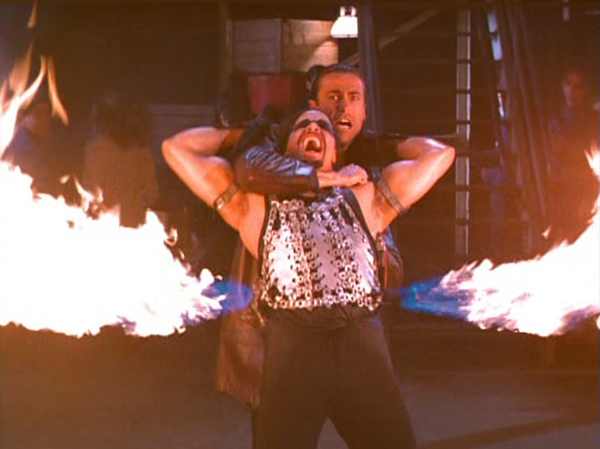 Isis is one of those aggressively flirtatious villains, pressing a gun to Conlin’s throat and then kissing him on the chin. Her funniest moment is actually saying “Hi yah!” as she chops Corey, then calling her “Nothing but a cheap American broad.” Or maybe when she’s pretending to ask him for help and then suddenly jumps up and straddles him.

There’s another fight where he seems to be blinded by his flashbacks, and falls back and impales the guy on his sword, maybe to make him less guilty for killing a guy? I don’t know. Also the guy disappears like a Jedi or a video game character.

I laughed when Isis released a stable of horses into the arena and a guy said, “Shit!” Otherwise everybody stays relatively calm and it just serves to give Conlin disorienting horse flashbacks. His main weakness is always getting confused by past life memories. His main motivation is trying to stop having bad dreams. It’s a testament to Bernhardt that he can play this character without seeming like a total boob.

It’s a pretty standard Hong villain, but I enjoy the weirdness of his evil giggling and childish mockery… 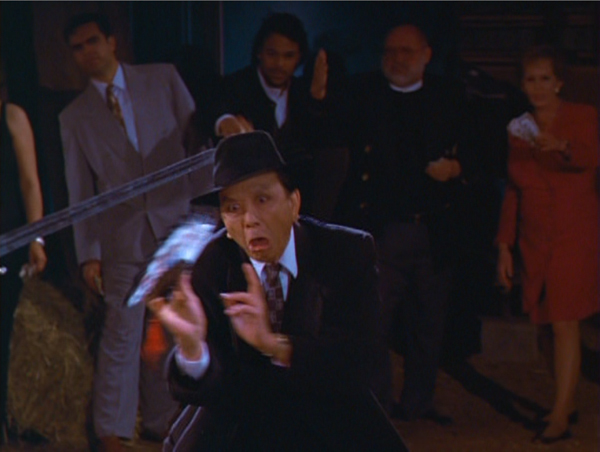 …and there’s an awkward one-liner that I sort of got a kick out of. His thugs kill a guy and he says “Oh, that reminds me. I’ve got to go bowling next week.” I think maybe the joke is that they chopped off his head and the head reminded him of a bowling ball? But if they did decapitate him then the footage doesn’t make that clear, and also why does he word it like bowling is a task you put on your list of chores and have to do to get it over with? Like, “That reminds me. I have to bring my suit to the dry cleaners.” I guess Parmenion isn’t as up on 20th century life as he pretends he is.

Other things that are unanswered: what the title means. I don’t think it means GLADIATOR COP 2, but I have no other guesses. The box, but not opening credits, call it G-2: MORTAL CONQUEST, presumably to cause confusion with Bernhardt’s appearance on the show Mortal Kombat: Conquest.

The production values are decent, but it’s pretty syndicated TV looking, with an overblown keyboard-as-orchestra score doubling the cheesiness factor at all times. In fact, the bombastic opening and closing visuals and narration would work for a TV series, but the plot doesn’t seem open-ended enough to be a pilot. So instead they’re just cool. “Only one man has the God-given right to the sword… and with it… he will be… INVINCIBLE!”

I like HIGHLANDER better.I miss having HIGHLANDERs to watch.

Alexander the Great Christopher Lee Clements Daniel Bernhardt James Hong Meeka Schiro Nick Rotundo
This entry was posted on Thursday, June 6th, 2019 at 12:03 pm and is filed under Action, Fantasy/Swords, Reviews. You can follow any responses to this entry through the RSS 2.0 feed. You can skip to the end and leave a response. Pinging is currently not allowed.