But forgive me, man. I was on the outside. There was no way to really know without seeing it that NINJA III is a must-see. 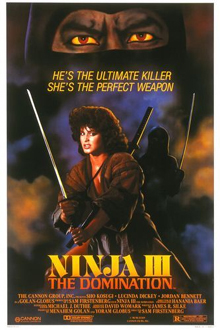 Part III has nothing to do with part 2 or 1, which also have nothing to do with each other, except that they all are a combination of asinine crap and awesome ninja shit, and they all have the great Sho Kosugi playing different ninja characters. What’s special about this one is the weird mix of ingredients. It’s got some supernatural THE EXORCIST shit in there, it’s got lots of goofy dated ’80s shit, and it’s got some seriously great ninja mayhem. I guess the appeal is kind of similar to NO RETREAT, NO SURRENDER. Maybe not as funny overall, but on the other hand NO RETREAT doesn’t have any action scenes that can compete with the opening assassination sequence here.

The movie opens with a Japanese man (David Chung as “Black Ninja”?) entering a cave, apparently a Secret Ninja Cave where he hides his weapons and costume. He suits up and heads to the golf course to assassinate some scientist who’s golfing with his wife/girlfriend and a whole bunch of bodyguards. It probly would’ve been easier to use a sniper rifle or even a bow and arrow from far away, but he just runs out onto the golf course, shows off by crushing their golf ball in his fist, and starts killing everybody between himself and the target. I don’t know, maybe whoever hired him asked him to make sure this guy knows that he’s being killed by a ninja. That probly costs extra, but might be worth it for some clients.

Anyway, he has to kill the bodyguards, then the couple, then the golf course security that show up, then the cops that show up. It just keeps escalating, and he has to dig deep into his bag of tricks. There’s alot of sword slashing and stabbing, but also shooting a blowdart into the barrel of a gun to cause a misfire, ninja stars, etc. He also manages to cause motorcycles to fly dozens of feet up into the air and crash into lakes like he’s in Hazzard County. (Not coincidentally I noticed Robbie Knievel listed on the credits.)

Once the cops show up he’s on the run just trying to survive. He jumps on top of one of the squad cars and not only stabs the passenger through the roof but also punches through to take out the driver. He climbs up a tall tree and jumps onto a police helicopter. He takes out some officers inside (one by throwing a ninja star with his toes) and causes it to crash. Eventually he’s completely surrounded and they all start shooting him over and over again, and even at that point he does a really cool disappearing trick.

When all is said and done I estimate he killed 2 golfers, 4 bodyguards and 20 cops. But it’s hard to be sure because they drop so easily you gotta assume some of them are playing dead or just unconscious. I believe there were about 10 of those, the non-fatal injured, for an estimated total of 36 victims. For sure he killed a minimum of 10, because that’s how many bodies you can see laying around at the scene of the standoff.

The lesson is, for any of you security guys out there, be sure to check for Secret Ninja Caves (SNCs) within the general vicinity of any golf courses your guy likes to play at.

After that incredible ’80s action opening it sort of turns into a weird horror hybrid, because Lucinda Dickey (the BREAKIN’ saga) is working on the powerlines nearby when the ninja goes down and accidentally gets possessed by his ghost. She lives in an arty/utilitarian apartment with a roommate and also works as an aerobics instructor, which is a complicated enough life, but it will get more complicated as she begins to black out and go on ninja missions to assassinate the cops who shot at the ninja. I guess it’s kind of like a werewolf movie, she knows something’s wrong and starts to realize she’s going out and killing at night. But instead of growing hair and sharp teeth she just takes costumes and weapons from the SNC.

Meanwhile she has a new man in her life. This cop named Billy Secord (Jordan Bennett) keeps trying to ask her out. At first she’s a total jerk to him, saying “Now get this straight, I don’t go out with cops, all right?” as if it was a rule she had decided on long ago. When he offers her a Coke or something she says “Thanks, but I don’t use soft drinks,” which is a weird way of putting it.

But she quickly changes her rule on cops (not soft drinks) and while she’s sleeping with him the closet lights up and a sword floats out. So that’s the type of situation we’re dealing with here. During The Domination she goes out and murders these cops in sleazy situations, like a triple spa murder and a guy playing pool in his boxers and undershirt with shoes and socks still on. When they found the body they probly first thought oh shit, that’s our colleague so-and-so and then wait a minute, did he take his pants off over his shoes? Or did he put the shoes on after taking off the pants?

She figures it’s a health problem, but the doctors can’t help her, they say that “other than your exceptional extra sensory perception” everything is normal. As if ESP is an ordinary health condition, like high blood pressure.

Western medicine having failed her she goes the other direction, she goes to James Hong (Lo Pan from BIG TROUBLE IN LITTLE CHINA) who chains her up and smokes her out with opium until she turns kinda Linda Blair, kinda EVIL DEAD. Hearing Hong talk to her in Japanese Billy picks out one word:

“I heard ‘ninja.’ I wanna know what the hell that is.”

Not only does he learn what the hell that is, he learns that “only a ninja can kill a ninja” (like only a silver bullet can kill a werewolf) and lucky for everybody there is a ninja with an interest in killing this particular ninja. His name is Yamada (Sho Kosugi) and he wears a cool eyepatch, which of course means that the Black Ninja took his eye and he wants revenge for spoiling his chances at seeing AVATAR the way James Cameron meant it to be seen.

Obviously they’re gonna have to magically pull the ninja out of her or something but first she gets possessed some more. At one point there’s a haunting going on in her crib so, in the proud 1980s tradition, she turns on some cheesy electric guitar music real loud and furiously dances by herself. It seems to help, but it doesn’t cure her. The ninja is still in there planning to kill all the cops, including her boyfriend.

And he’s gonna have a good opportunity: “the funeral.” One of the other officers is worried that Billy’s one of those guys who ignores all his buddies as soon as he gets a girl, so he says, “I know the lady’s beautifu, but don’t forget the funeral.” It’s not clear which of the 20 murdered cops the funeral is for, or why it isn’t a bigger deal, or why there aren’t that many of his fellow officers there, or why Billy thinks it”s okay not to wear his uniform. But it is clear that it’s a good place for the girl to turn into a ninja and try to kill everybody. Man, ninjas are cold, killing people at funerals. I’ve always been against that.

There’s some more good action at the climax, including but not limited to yanking a guy off a motorcycle, and clubbing an innocent tombstone. Yamada chases the ninja into a building and come on man, when are people gonna learn to check the ceilings for ninjas? Ninjas always hide above you, it’s very predictable. Yamada of all people should know this, he’s a ninja and probly hides on the ceiling all the time himself. Think, man. Where would you hide if you were a ninja, which you are?

I shouldn’t criticize Yamada though, I like the guy. He jumps through the ceiling. Just right through it, breaks through the wood. You gotta respect that.

At the climax the Black Ninja is stabbed and his body spins and drills into the ground, causing an earthquake. helpful hint: only a grappling hook can save you from a ninja earthquake.

The action in this is equal to or greater than many worthwhile Cannon films, but it stands out because of the bonus weirdness factor. I mean, this girl lives in an apartment with a big wooden spool (like for cable wire) as a table, concrete brick walls, a bed made of metal girders, a construction helmet hanging on the wall. It’s a small place but she must do okay between fixing power lines and teaching aerobics because she can afford an arcade video game called “Bouncer”, which later becomes haunted.

Director Sam Firstenberg returned after REVENGE OF THE NINJA. He later did AMERICAN NINJA 1-32, AVENGING FORCE, AMERICAN SAMURAI, OPERATION DELTA FORCE, etc. Working with Lucinda Dickey here must’ve got him the job of BREAKIN’ 2: COME ON GUYS YOU KNOW THE SUBTITLE I’M NOT GONNA SAY IT. The writer is James R. Silke, who did REVENGE OF THE NINJA, AMERICAN NINJA and KING SOLOMON’S MINES.

Wait a minute, they never did say why the ninja assassinated the scientist, did they? I wonder if that’s who killed the electric car?

Cannon Films James Hong Lucinda Dickey ninjas Sam Firstenberg Sho Kosugi
This entry was posted on Wednesday, December 8th, 2010 at 12:58 am and is filed under Action, Horror, Martial Arts, Reviews. You can follow any responses to this entry through the RSS 2.0 feed. You can skip to the end and leave a response. Pinging is currently not allowed.

34 Responses to “Ninja III: The Domination”