The police keep hovering nearby and he continues to work on the movie as a stuntman, comparing his situation to a war buddy who stepped on a landmine and couldn’t step off because that’s how you get blown up. But strangely it never really goes back to the story of him being a fugitive. It’s just this really surreal, inventive story about his possessive love for Hershey, his friendship with O’Toole, and eventually his fear that it’s all a conspiracy to kill him in a re-try of the stunt that killed Bert. 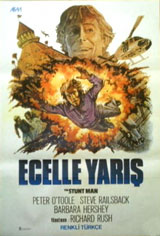 The feel of the movie is so strange and dreamlike that I kept expecting a twist like he actually died and now he’s in Hell/Heaven/purgatory or something like that. But maybe that’s just director Richard Rush’s idea of what Hollywood is like. He has kind of a magical realism approach to making movies-within-movies. O’Toole is almost a god-like character who tends to just casually float in on a camera crane out of nowhere, intruding on people’s private lives. He also plays tricks on his actors to get more natural performances, so although we and Railsback think a stunt has gone wrong when he collapses through a ceiling into a bed with a naked couple, it turns out this is part of the scene, and a crowd of actors playing drunken Nazis surround him and strip him to his boxers.

Rush is the guy who did FREEBIE AND THE BEAN, and it turns out he’s really arty. Right from the opening shot I thought, “whoah, this is a stylish movie” (thought paraphrase) and it never let up. This thing is so full of cleverly planned out camera moves and tricks it’s like a 1980 Jean-Pierre Jeunet movie. According to the DVD they even invented the rack focus for this movie. That’s one of my favorite focuses.

But I think it still qualifies as stuntsploitation because there are some incredible stunts shown when he’s working. A long series of rooftop stunts, fake gunfights, falls, jumps, etc. In this world, of course, a whole complex battle sequence is all shot in one go. There’s also some great editing tricks including when he crashes a bi-plane into a tree, flying out of the cockpit toward the camera and it cuts to a matching shot of him thrusting into Barbara Hershey as he orgasms. Kind of like the reverse of the ol’ cut-from-love-scene-to-rocket-taking-off gag.

Railsback is great in the movie. This is the opposite of TURKEY SHOOT – instead of getting nothing to do he gets to do everything. He gets to be tough, funny, crazy, in love, paranoid, terrified, insane, confused. Rush seems to be obsessed with scenes that start off one way and end up totally different, so there are a whole bunch of turnarounds. In one of many memorable scenes Railsback emotionally recounts to Hershey the story of why he’s wanted by the police. As he describes his crime he flies into an insane rage and starts knocking over furniture and throwing things at the walls. By the time he’s destroyed everything in the room and covered the floor in so many paint cans you can’t even walk across it, he and Hershey are both laughing and happily in love again.

Hershey is also very good and sexy, and also gives a pretty terrible old lady makeup performance in the movie-within-a-movie. But I think this is intentional, like Naomi Watts in MULHOLLAND DOCTOR. I mean, she does go from dog food commercial to WWII epic.

There’s a documentary on the Anchor Bay DVD that I didn’t get a chance to watch all the way through, but from what I saw it was very unique. It’s called THE SINISTER SAGA OF THE MAKING OF THE STUNT MAN and it’s a quirky first-person essay by Rush. Interviews with Railsback, O’Toole, Hershey and others are strung together by Rush as he talks to the camera, all the while travelling around in a low budget video version of the type of camerawork and gimmicks he used in the movie. So for example he seems to be flying a small plane while he tells a story about pitching to a producer on a plane. He also tells some funny stories like how no studio wanted to make a movie about a stuntman at all, then after three or four other movies beat them to it they thought it was a great idea.

So that’s why this isn’t the first stuntman movie, but it’s definitely the most original one. Also probaly the only one nominated for best actor, director and adapted screenplay Oscars. So far.

Peter O'Toole Steve Railsback stuntsploitation
This entry was posted on Friday, May 15th, 2009 at 1:27 am and is filed under Drama, Reviews. You can follow any responses to this entry through the RSS 2.0 feed. You can skip to the end and leave a response. Pinging is currently not allowed.

16 Responses to “The Stunt Man”