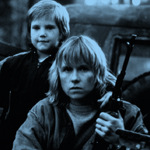 Before they get into their helicopters to leave, Rob looks up into the hills and muses that “He’s up there.” We will later learn that he’s talking about his hermit brother Ben (Michael Ironside around the time of EXTREME PREJUDICE and PROM NIGHT II), who indeed lives with a couple of dobermans in an isolated cabin on the edge of a cliff above a waterfall, accessible by rope bridge. 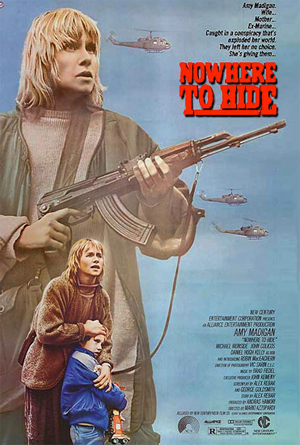 Unlike in G.I. JANE and stuff, these men are cool with a woman showing them up. They think she’s great. The poster says Barbara (or actually it says Amy Madigan!) is an ex-Marine, which makes more sense than just being the Major’s wife who’s allowed to play with them. They fly their helicopters right to the parking lot of Shirley’s, a huge tavern where all the soldiers hang out. There is an actual Shirley (Shirley Merovitz, LIBERACE: BEHIND THE MUSIC) tending the bar and everybody loves her and serenades her like she’s their favorite grandma and it’s her birthday. They have a pretty good community here.

When a copter is later downed in the woods and kills a couple of the boys, it’s Rob’s job to investigate the crash site and study the wreckage to figure out the cause. After a thrilling montage of tests he discovers the faulty part responsible, putting him in the crosshairs of a conspiracy within the military to cover it up.

I enjoyed the ridiculous foreshadowing of Rob coming home, sprawling out on the couch with a beer, looking at the engine part, tipping his head back, wide-eyed, thinking about what a Pandora’s box he’s about to open, and suddenly being jumped on by his 7-year-old son Johnny (introducing Rob MacEachern, PIN) yelling “YOU’WE DEAD!!!” and smacking him with a Voltron toy. 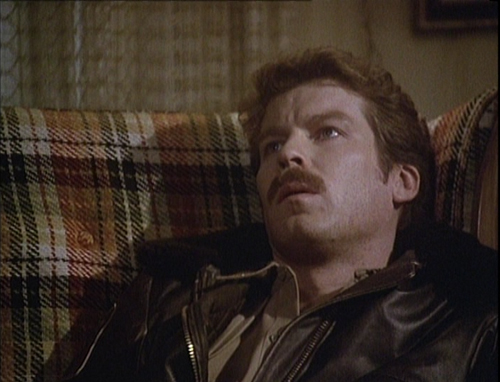 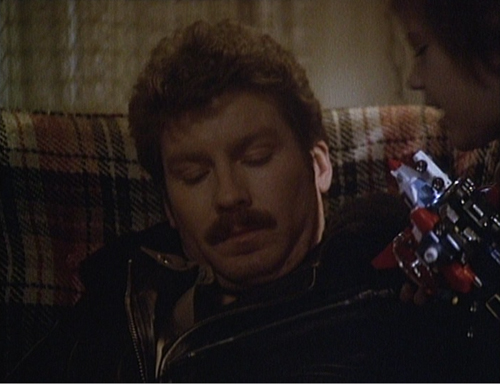 This Voltron is surprisingly important to the movie. Before you get too excited it’s not the lion Voltron, it’s the other one. But Dad is timing Johnny putting it together when some masked conspirators storm in and shoot him HARD TO KILL style. 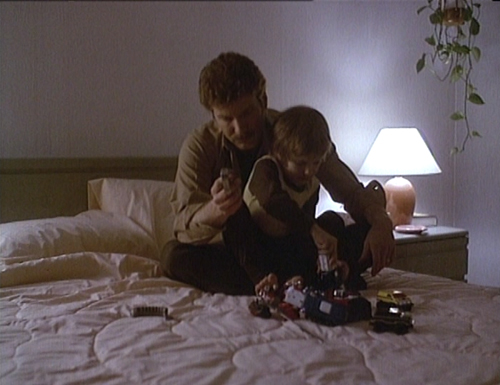 And he’s not that hard to kill, so that’s it for him. But the kid and the robot survive and he happened to have put the faulty helicopter part around the robot like a belt, so he has that too. And throughout the movie the kid is traumatized by having laid face-to-face with his dad while he died, so his mom doesn’t stop him from constantly carrying around his robot hugging it like a teddy bear, and nobody realizes he has the evidence they’re all looking for right there. 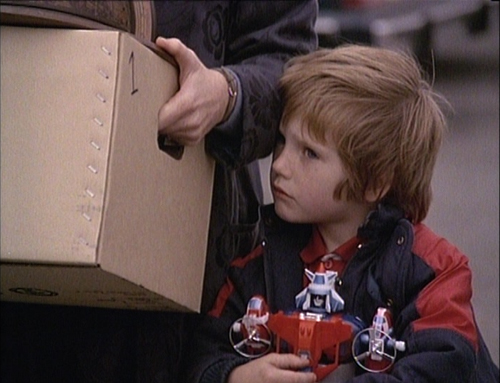 Barbara is also a metal sculptor. I’m not sure if that counts as a badass juxtaposition, because she kinda looks badass doing it. She doesn’t hear the shots because she’s in the garage welding. There’s a great bit where she hides out and then sets a guy’s head on fire with her torch.

The killers planted a classified file in the house to make it look like Rob was dirty. The cops are assholes to Barbara and some of the military people are nice because “Rob was a good man, the best damn Marine I ever had the pleasure of serving with,” but she resents and distrusts them for obeying the order to skip Rob’s funeral. And her friends start not wanting her around on account of some flimsy “it’s dangerous to be around you when people keep shooting at you” excuse.

Investigative reporter Mark Halstead (Clark Johnson, IRON EAGLE II, The Wire), hated by the Marines for some comments at Shirley’s, tries to help Barbara get to the truth. Admirable, but bad idea. He gets followed around by the killers (one now with bandaged face). They run his potential source (Chuck Shamata, DEATH WISH V) off the road, making his car go off a jump so he gets impaled on a bundle of rebar. In the very next scene Mark tries to tell Barbara about it at a cemetery and gets shot. There’s an intense station wagon car chase in which a coffin gets run over, many fences and warehouse doors are rammed, a tire has to be changed and a cop gets rammed and crushed between two vehicles. The legendary Buddy Joe Hooker (TO LIVE AND DIE IN L.A., HARD TO KILL, THE HUNTED, DEATH PROOF) is listed as “stunt designer” on IMDb, though I couldn’t find his name on the end credits. 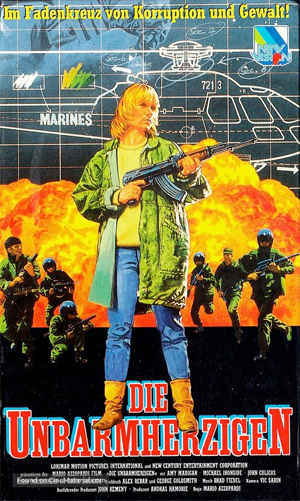 Barbara is smart, tough under pressure, and a hell of a tactical driver. But Madigan goes more for the dramatic acting than some kind of action hero thing. She runs in terror like a final girl, doesn’t turn into Sarah Connor or anything like that. At one point she snaps and throws the Voltron on the ground and cries. Alot of the fans will be upset about that.

Right before the crash there’s a bit where the pilot is talking about lizards that don’t need males to reproduce. But otherwise there doesn’t seem to be any sort of theming around feminism. Barbara makes the smart move of going into the woods to find the mysterious Ben. Instead of trying to go it alone she knows to combine forces. Like Voltron.

Ironside is great, of course, playing a gruff mountain man type guy who has never been visited by anyone but his brother, but who under the circumstances tries to be accommodating. At the beginning I assumed he’d be the villain, but this is much better. I thought it was funny when he slammed two dead rabbits on the table in front of little Johnny, making him cry, and asked “What’s wrong with your boy?” Barbara explains that he saw his dad die. I guess otherwise they wouldn’t understand a kid whimpering at bloody bunny corpses.

I guess there really is nowhere to hide, because they find her out in the woods. But as the poster indicates, the table turns, and the not having anywhere to hide is on the other foot, or whatever. Though the movie doesn’t go as full-on FIRST BLOOD as I’d like, Cutter uses her established skills and connections: shooting, stealth, flying a helicopter, going to Shirley’s to get a message to the Marines. It’s pretty subdued by the heightened standards of 1987, the year of STEELE JUSTICE, but it’s a pretty good little 90 minute movie about a wife and mother who asks that you not fuck with her. And it’s elevated by a strong score by Brad Fiedel (THE TERMINATOR, BLUE STEEL, JOHNNY MNEMONIC).

The screenplay is credited to George Goldsmith (FORCE: FIVE, CHILDREN OF THE CORN, BLUE MONKEY) and Alex Rebar (BEYOND THE DOOR, TO ALL A GOODNIGHT, DEMENTED, also played THE INCREDIBLE MELTING MAN). Director Mario Azzopardi began his career with GAGGA (1971) in his native Malta, but starting in the ’80s he was in Canada, mostly directing TV shows including The Littlest Hobo, The Edison Twins, Captain Power and the Soldiers of the Future, RoboCop, M.A.N.T.I.S. and Highlander. Last year he returned to Malta for a drama called HABBILNI HA NIRBAH.

Alex Rebar Amy Madigan Brad Fiedel Buddy Joe Hooker Chuck Shamata Clark Johnson Daniel Hugh Kelly George Goldsmith Michael Ironside
This entry was posted on Tuesday, May 7th, 2019 at 11:01 am and is filed under Action, Reviews. You can follow any responses to this entry through the RSS 2.0 feed. You can skip to the end and leave a response. Pinging is currently not allowed.

4 Responses to “Nowhere to Hide”